In new research, Junia Howell looks at the role of neighborhoods in promoting social and economic success for the next generation. Comparing Germany and the United States, she finds that the US system of focusing on neighborhood-level provision – compared to Germany’s federally oriented model – means that American communities have a greater impact on their intergenerational mobility of their residents.

When I first had the opportunity to travel to Europe, I was struck by the similarities and differences between poor European and American neighborhoods’. Having grown up in a marginalized community myself, I was intimately familiar with the lack of institutional resources and compounding inequities in most US poor neighborhoods. So, I immediately noticed how despite their challenges European neighborhoods had more infrastructural resources than their American counterparts. At the same time, however, I was struck by the sociocultural similarities. Even though I did not realize it at the time, this planted a seed—a question. How do impoverished communities differ between countries and do any of these differences minimize the generational poverty often observed in US impoverished neighborhoods?

Years later, I returned to this question. Unlike when I first was observing national differences in impoverished communities, I had now read hundreds of studies on the influence these communities have on the likelihood that their residents’ children will be better off than their parents – also known as intergenerational mobility. These studies had been conducted all around the world. Yet, surprisingly no one had conducted an empirical cross-national investigation where they analyzed observations from multiple countries in one statistical model. This is for good reason. The data used in these types of studies is highly restricted and fairly complicated. Nevertheless, I embarked on a yearlong journey to combine data from two countries—Germany and the United States.

I selected Germany and the United States as ideal types—or good examples—of the contrasting approaches countries have towards neighborhoods. In the United States, cultivating distinct neighborhoods have long been seen as a way to build community and strong networks. To this end, schools, post-offices, libraries, parks and other public amenities are often neighborhood based. In theory this enables residents of large cities to build small town like connections within their residential community. However, in practice, this results in highly unequal neighborhood schools, parks, etc… In Germany, on the other hand, amenities and government services are more centrally controlled meaning that where residents live has a smaller effect on which school they attend and the quality of local amenities.

Germany and the US also have distinct approaches to distributing governmental services. Broadly speaking, Germany distributes services federally while the US allocates services primarily through local communities. For example, in Germany the federal and state (länders) governments are responsible for educational financing and make 57 percent of the decisions regarding the public education curriculum, while only 21 percent of the decisions are made by the local districts. By contrast, only 24 percent of US educational decisions are made by federal and state governments while 53 percent are made by local districts. This decentralization has contributed to high levels of educational inequality in the US.

Noting these differences, I conducted a comparison of intergenerational economic mobility from the 1970s to the present day. Holding individual and family factors constant, I find that neighborhoods have a larger impact on residents’ mobility in the United States than in Germany. This is because of two main reasons. First, the high level of racial segregation in the United States exacerbates the effects of neighborhoods. Second, US neighborhood based amenities and resources compound existing inequalities. 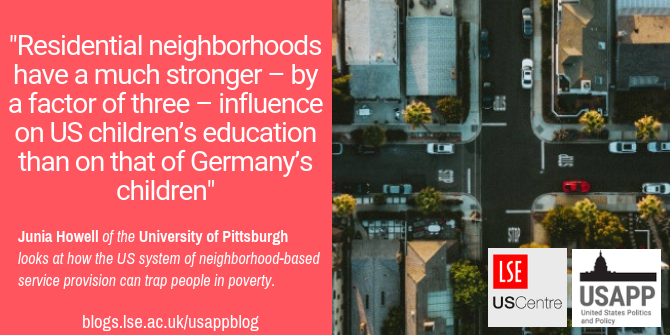 Nonetheless, neighborhoods do matter in Germany. In both Germany and the United States the socioeconomic status of one’s neighbors influences residents’ networks, norms and expectations which in turn impact economic mobility. In other words, some of the sociocultural similarities I casually observed years ago are comparable in the two countries. Additionally, Turkish residents in Germany are similar to Black Americans when it comes to the level of economic discrimination they experience —suggesting Germany also needs to address interlocking forms of racial inequality.

So what is to be done? Well, scholars often suggest resources in low socioeconomic status neighborhoods need to be increased or low income residents need to be relocated. This is part of the story. Yet, my research highlights that changing the very role neighborhoods play in residents’ lives is also important. The idealized conception of neighborhoods as distinct small towns perpetuates inequity since it fosters competition for resources amongst nearby neighborhoods. Nation states and city governments need to consider how they can ensure resources are distributed across all residents and how all communities are accessible to residents of various socioeconomic and racial backgrounds.

Junia Howell – University of Pittsburgh
Junia Howell is an urban sociologist whose work examines racial and socioeconomic inequality. By utilizing mix-methods and cross-national comparisons, her work illuminates how cities can be places of possibility for all residents. Currently, she is working on four projects that evaluate how socioeconomic inequality is influenced by neighborhoods, segregation, natural disasters and the housing appraisal industry.