In Aboriginal Peoples and the Law: A Critical Introduction, Jim Reynolds offers an excellent new encapsulation of Canadian Aboriginal law, discussing 163 cases stretching from 1823 up until the present day and covering topics including sovereignty, Aboriginal title and treaties. Reynolds draws on his wealth of experience to provide a compendious summary of the development of Aboriginal law in Canada, writes Sarah Pike. 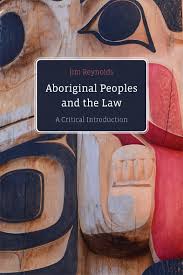 ‘Thoughtful and well-written (though brief!) analysis…’. This was part of the feedback I received in law school in 1993 on my Aboriginal Law paper about ‘Aboriginal title’, an Indigenous interest in land recognised by the common law. It occurs to me now, after practising Aboriginal law for much of the last 25 years and recently reading Jim Reynolds’s excellent new encapsulation of Canadian Aboriginal law, Aboriginal Peoples and the Law: A Critical Introduction, that my haste may not have been the only contributor to my brevity. In my defence – I now realise – there simply was a dearth of judicial decisions on my topic. Aboriginal Peoples makes clear from its very first page – a helpful one-page list of leading cases in Canadian Aboriginal law, stretching from 1823 (an American case) to 2016 – that there has been an explosion of Canadian judicial decisions concerning Aboriginal peoples and interests since the 1990s.

Of the 36 cases Reynolds lists on this opening page – his book discusses 163 overall – only ten had been decided when I was in law school. With respect to Aboriginal title, the subject matter of my paper, there were only two. The first was St. Catherine’s Milling (1888), decided by the Judicial Committee of the Privy Council in England sitting in appeal from a judgment of the Supreme Court of Canada (as it did then) but not involving any Indigenous parties. The second was Calder (1973), the first case brought by Indigenous plaintiffs for a declaration of Aboriginal title. The Supreme Court of Canada decided the case in 1973 but not on the merits, as the majority of the court held that the plaintiffs had not obtained the Crown’s consent to sue it – a fiat – as was required at the time. Reynolds discusses these two cases in several places in his book, most notably in a section entitled ‘History of the Law of Aboriginal Title’ (94-102).

Reynolds obtained his undergraduate law degree in 1967 and his PhD in law in 1970, both from the London School of Economics; he then taught at LSE for a few years and qualified as a barrister in England, before becoming a barrister and solicitor in British Columbia in 1980. Over the last 40 years, he has had a front-row (and occasionally a driver’s) seat to many of the developments in Canadian Aboriginal law. Reynolds has now bestowed on us the benefit of his experience, teaching ability, concise writing and learned synthesis of how we got to where we are today in Canada with respect to the subject matters of his title: Aboriginal Peoples and the Law.

Aboriginal Peoples, as the publisher blurb explains, is aimed at ‘students taking both introductory and specialist courses in Aboriginal law, Indigenous studies, or the social sciences; lawyers with an interest in Aboriginal law; and journalists, government officials, business people, and other members of the public who want a better understanding of where the law stands today and where it should go in the future’. As a lawyer with several decades behind me, I learned something on nearly every page. Most importantly, I appreciated Reynolds’s explanation of the context in which the law has been made through judges’ decisions and also of the relationships between the history and the present and between various sub-fields of Aboriginal law. But I also used this book as my course textbook when I recently taught a law school Aboriginal Law course. My students, I believe, found Aboriginal Peoples a straightforward and easily-comprehensible explanation of the law that enabled them to get up to speed quickly and to begin to analyse current legal issues.

Each of the book’s eight chapters averages just under 30 pages and is well-written in plain English. Reynolds assumes the reader’s intelligence, but not that she is coming to the book with years of experience in Aboriginal law: indeed, his first chapter is entitled ‘What is Aboriginal Law?’. Reynolds includes an important second chapter on the ‘Historical Background’ to Aboriginal law in Canada, a topic indispensable to a proper understanding of Aboriginal law. Reynolds then adds a third foundational chapter, ‘Sovereignty and Aboriginal-Crown Relations’, again providing the reader with this essential overarching perspective.

The heart of Aboriginal Peoples – at least, perhaps, from a law student’s or lawyer’s perspective – is its middle chapters about ‘Aboriginal Rights and Title’, ‘Treaties’ and ‘Consultation, Accommodation, and Consent’. Here, Reynolds discusses the historical development of the caselaw on each broad legal topic, bringing the reader right up to the most recently-decided cases (as of mid-2018). He synthesises both judicial decisions and scholarship, enabling the reader to see the fabric that the law has woven, rather than only the threads making up that fabric.

Reynolds’s penultimate chapter addresses two vast topics:  ‘Indigenous and International Law’.  Indigenous law, in particular, is a rapidly-developing field as Indigenous peoples recover and develop their own laws and legal systems, many of which settler societies and legal systems around the world almost eradicated. Those who are interested in this field – in which there has been a bounty of Canadian legal academic writing in the last decade or more – might be disappointed that Reynolds does not provide more in this chapter. Some might also argue with his assertion that Indigenous laws ‘do not form part of the Canadian law except to the extent that they have been incorporated into Canadian common law’ (175). Yet Reynolds was relying on a judge’s decision in drawing that conclusion, and those who wish to read more about this topic – or any other that Reynolds so ably canvasses – can investigate further by following the plethora of footnotes accompanying each chapter.

In his final chapter, ‘A Just Society?’, Reynolds – appropriately – provides more questions than answers about the future of Aboriginal law in Canada, including ‘probably the most important question for non-Aboriginal people in areas such as British Columbia’ – Reynolds’s home and mine – ‘where treaties have not been signed and Aboriginal title still exists’. This question is: ‘what does Aboriginal title mean for private property rights?’ (200). Indeed, this aspect of Aboriginal title is now a topic for law school papers, and Reynolds’s book is an excellent place to start in understanding this still-unresolved conflict between two legal interests that both appear to ‘confer exclusive use and possession’ of land (201). Aboriginal Peoples brings the reader up-to-date with respect to the current caselaw on Aboriginal title, explaining the Supreme Court of Canada’s decisions in Delgamuukw (1997), then Marshall; Bernard (2005) and, finally, Tsilhqot’in (2014) (see especially Chapter Four), thereby helping him to more fully understand the intricacies of the remaining questions.

Reynolds concludes Aboriginal Peoples with a section entitled ‘Evaluation of Existing Law’, writing in the first person, as he does on occasion through the book. In my experience, one of the difficulties in analysing Aboriginal law – whether a court decision or academic commentary – is perceiving the writer’s perspective, and I appreciated knowing when Reynolds was attempting to objectively explain the law and when he was commenting on it. His approach, I believe, contributes to the reader’s comprehension of the extent to which individual perspective affects Aboriginal law in Canada; indeed, this matter of ‘who is doing the writing?’ is itself one of the final topics Reynolds addresses. He provides his opinion that some of the Supreme Court of Canada’s decisions in Aboriginal law favour ‘liberal discourses of rights’, which include ‘an approach to equality that ignores, among other things, disparities in resources, political and social power, and social inequality generally’ (212-13). If a mark of a great book is that it makes one want to read further in the topic, then Reynolds has done a fine job. As is evident from this brief example, the questions and issues that Reynolds raises in his final pages are ones that not only law students and lawyers must consider, but also all citizens of Canada and many other settler nations as well.

That Reynolds provides us with his perspective occasionally in Aboriginal Peoples gives us a chance to reflect on how lucky we are as readers to be able to receive this, in addition to his compendious summary of the development of Aboriginal law in Canada. Were I to go back in my time machine to 1993 to discuss my paper with my law professor, I would keep Aboriginal Peoples and The Law: A Critical Introduction in my back pocket to help me better understand where we were in 1993, where we would be in 2018 and where we might very well end up in the years to come.

Sarah Pike
Sarah Pike is a lawyer in Vancouver, where she has worked since being called to the Bar of British Columbia in 1995. She has worked in a big firm, a small firm and government.  She has also been a graduate student in law and taught at a law school. Sarah is now a freelance lawyer practising Aboriginal and constitutional law through her own law firm, SPIKE Law.