Lawmakers in many conservative-states have recently passed a tranche of far-reaching bills aimed at restricting abortion. Alex Keena argues that such “supply-side” measures to prevent abortion are unlikely to be effective, as they will do little to reduce the number of women who get abortions. Instead of being able to access abortion in their home states, he writes, women will simply seek them elsewhere, self-induce or seek unsafe procedures, which could have dire consequences for women’s health.

In recent weeks, several state legislatures have passed new anti-abortion bills that will impose far-reaching restrictions on abortion. Last Wednesday in Alabama, Republican Governor Kay Ivey signed the most restrictive abortion law in the country, which makes all abortions illegal except those that prevent a “serious health risk” to the mother. Earlier this month in Georgia, Governor Brian Kemp signed a “fetal heartbeat bill” that effectively bans abortions beyond six weeks, modeled upon similar bills recently passed in Ohio, Mississippi, and Kentucky. Across the country, GOP controlled state governments are emboldened by a new conservative majority on the Supreme Court and the prospect of overturning Roe v. Wade.

Although it is uncertain whether this new wave of anti-abortion laws will withstand judicial scrutiny, these policies are almost certainly doomed to fail at their stated goal of stopping abortion, and there are compelling reasons to believe they will lead to a host of unintended consequences, such as a rise in unsafe abortions and adverse public health outcomes. Why? The GOP’s strategy for reducing abortion ignores the socio-economic factors that motivate women’s reproductive choices, and instead relies on the logic of “supply-side” economics—that is, it aims to prevent women from accessing abortions by imposing stiff criminal penalties on abortion providers. If history is any guide, such “supply-side” policies tend to produce disastrous unintended consequences.

So-called “supply-side” economics gained popularity among conservatives in the 1970s as a “free market” alternative to Keynesian economics, which implies that government spending can be an effective catalyst for economic growth. In contrast to Keynesianism, supply-side theory holds that the best way to generate economic growth is by increasing the “supply” of goods and services through pro-business policies, such as cutting business regulations and reducing taxes on the wealthy, that promote business investment activity by the wealthy. In principle, the benefits of these policies will “trickle-down” to ordinary people in the form of lower cost goods and services, leading to economic growth.

In practice, however, there is little evidence that the supply-side model has delivered the type of economic benefits that proponents have promised. For example, supply-side theory provided the rationale for major tax cuts during the administrations of Ronald Reagan, George W. Bush, and Donald Trump, which supporters promised would “pay for themselves” through increased growth. While evidence suggests a temporary boost in economic growth after the passage of the Reagan tax cuts, they came at the cost of reduced revenues that increased deficits and prompted subsequent tax increases. Moreover, they did not promote business investments, as expected, which suggests that the short-term economic gains were driven by other factors. The Bush tax cuts, which primarily benefited high income earners, did not improve the economy, but rather created a host of new problems, including increased income inequality and a dramatic rise in deficits which contributed to the economic downturn in 2007-09. More recently, the supply-side experiment in Kansas in 2011 may have actually harmed the state’s economic performance and in the process triggered a state budgeting crisis, while the Trump tax cuts have apparently led businesses to use tax savings to prop up corporate stock prices rather than invest.

Despite sparse evidence to support supply-side theory, the model has been embraced by conservative lawmakers as a solution for tackling complex social problems, such as problematic drug use, prostitution, as well as family planning and abortion policy, with little success. The assumption behind the “supply-side” approach to social policy is that social problems reflect rational economic decisions made by individuals acting in self-interest. Accordingly, restricting the “supply” of an undesirable good (such as drugs, or sex, or abortion) through prohibitive policies will stop people from consuming them and resolve their social harms. 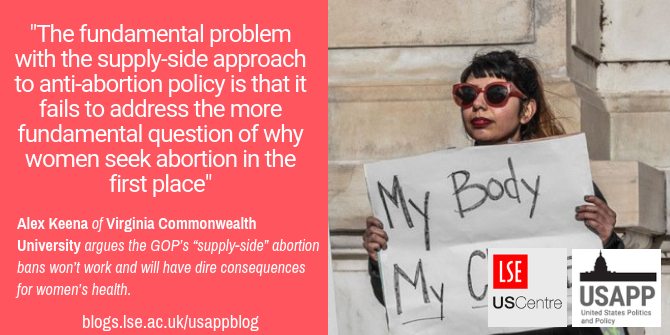 Consider the case of federal drug policy. Since the 1970s, the federal government has waged a “war on drugs” in an attempt to resolve the social harms of problematic drug use by eliminating the supply of illegal drugs in society. The logic of the drug war is that costly drug interdiction efforts and harsh criminal sanctions imposed on dealers will raise the “costs” of drugs in society, leading to a reduction in illicit drug use. However, this has not panned out, in part because people with problematic drug use do not make rational cost-benefit analyses when engaging in this behavior. Thus, despite over a trillion dollars invested in the criminal justice system, illicit drug use remains unchanged since the 1970s, and paradoxically illegal drugs have actually become less expensive over time. Meanwhile, the drug war has created a number of new social problems in its wake, such as mass incarceration, adverse public health outcomes, and an erosion of police-community relations, to name a few.

Like the War on Drugs, the Republican Party’s standard approach to anti-abortion policy adopts the supply-side model and assumes that limiting access to safe abortions will stop women from getting abortions. The recent abortion bans in Alabama and in other Republican controlled state legislatures take this model to the extreme by criminalizing providers of abortions. Yet a large body of scholarship on the impact of restrictive abortion laws provides little evidence in support of this approach. While some studies suggests that restrictive abortion laws may have a modest negative impact on the number of women who end up getting abortions, other studies show that they simply force women to delay their abortions, travel to abortion providers in other states, seek unsafe abortions, or self-induce. Moreover, restrictive abortion laws lead to a host of other problems, such as an increase in maternal death, and negative emotional and physical health consequences for women.

The fundamental problem with the supply-side approach to anti-abortion policy is that it fails to address the more fundamental question of why women seek abortion in the first place—that is, the numerous factors that lead women to end unplanned pregnancies, many of which are easily addressed through public policies. For example, studies show that many women seek abortions to avoid economic hardship, and that states with the most restrictive abortion policies tend to be among the lowest performing in terms of infant and child well-being. This suggests that policies addressing the “demand-side”, such as comprehensive sex education and an expanded social safety net, may be more effective at reducing the number of abortions. Given the supply-side design of the recent abortion bans passed in Alabama, Georgia, and a several other states, there are reasons to doubt that these efforts will succeed in their stated goal of stopping abortion.