In late April, the Trump administration announced it would be designating Iran’s Islamic Revolutionary Guard Corps (IRGC) as a terrorist organization. Younes Mahmoudieh argues that the designation highlights the United States’ unfamiliarity with Iranian politics and society; while it has been criticized by Western governments and commentators the IRGC is a source of ideological and national pride for the Iranian people who rely on the group for their national security.

In the days following the Trump administration’s unprecedented decision to designate the Islamic Revolutionary Guard Corps (IRGC) as a terrorist group on April 8th 2019, the response in Iran has been one of massive support for the corps. The country has rallied around its opposition to the United States and President Trump as “factional politics” have been temporarily put aside to deal with Iran’s devastating flood (which the IRGC has been tasked with managing).

In recent months, Iran’s worst floods in 70 years have taken more than 70 lives and hit 26 out the country’s 31 provinces. According to Iran’s state-funded broadcaster, Press TV, the IRGC has been leading efforts in support of the Iranian Red Crescent to distribute aid and abate the overwhelming water damage. The corps’ relief services during natural disasters such as the recent flood serve to cement its place in the heart of the nation. President Trump’s decision to sanction the group once again highlights the United States’ unfamiliarity with Iranian politics and society.

Iran is a proud country with a political tradition of resistance. The country often unites when facing external pressure and does not respond well to intimidation. Any possible rapprochement between Iran and the US would not be possible without the role of the corps. The United States has failed to understand on multiple occasions that the IRGC is not simply a military entity, but rather a source of ideological and national pride for the Iranian people who rely on the group for their national security.

The history of the IRGC

Trump is making a strategic mistake with significant consequences for Iran-West/US relations. The Guard has much domestic support in Iran due to its role in rebuilding the nation after its costly war with Iraq. Without the Revolutionary Guards, an indispensable part of the official army, Iran could not have defeated Saddam’s invasion (1980-1988). Conservative estimates place casualties of Saddam’s “imposed war” at around 1 million for Iran.

The Modern Role of the Corps

This extensive domestic support is likely to continue for the foreseeable future because of the group’s current role: protecting Iran’s borders and serving as an international “resistance force.” The IRGC has played the crucial role of maintaining the security and stability of Iran since the 1979 revolution, and many politicians share close ties with the group. The guards were directly responsible for preventing the fall of Baghdad and Erbil in 2014 and were the main branch of the Iranian armed forces coordinating the offensive against ISIS. Even former Secretary of State John Kerry acknowledged that Iran’s role against ISIS was a “helpful” one. Many Iranians attribute the victory against ISIS and Iran’s relative safety in the region to the IRGC.

In recent years, the IRGC has attained considerable influence in the region and has developed significant interests in its relationships with Syria, Iraq, Afghanistan, Yemen, and Lebanon. The corps has evolved into a 120,000-strong force with “millions of devoted volunteers.” Sanctioning the group has broad regional implications and complicates complex relationships within the Middle East. The Trump administration’s decision “marks the first time the U.S. Department of State has ever labeled a country’s state military as a terrorist organization” according to CNBC. Secretary of State Mike Pompeo even went as far as to say that “the commander of Iran’s Quds Force, Major General Qassem Suleimani, is a terrorist and will be viewed the same way as extremists including ISIS leader Abu Bakr Al Baghdadi.” This statement offended many in Iran who see Suleimani as a national hero and united many Iranians in their resistance towards the Trump administration and its sanctions regime. In the following week, Major General Suleimani’s visits to the flood-stricken provinces of the country were broadcasted in Iranian media and widely publicized (where he is often praised for his service). 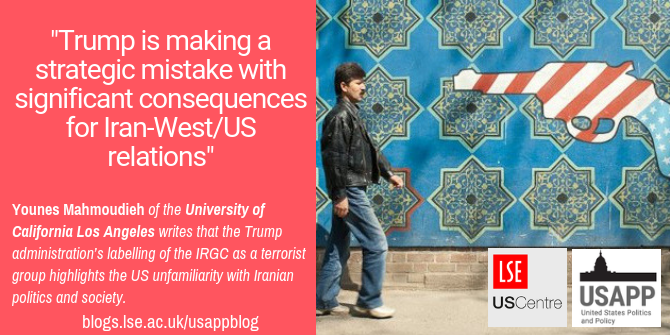 “US Target” by Kamyar Adl is licensed under CC BY 2.0

The IRGC has been a source of controversy in the West since its inception. The foreign nature of many of its activities has drawn the concern of domestic and foreign critics alike. The group is closely associated with Hezbollah and has been accused of training and arming militias in Iraq, Syria, Lebanon, and Yemen; these militias are often found combatting western forces and interests in the region.

President George W. Bush often claimed that the “United States had evidence of Tehran supplying ‘material support,’ including mortars and elements of sophisticated roadside bombs” to Shiite insurgent groups targeting US forces after the Iraq War (2003 – 2011). Iran has denied involvement claiming that a majority of American military deaths in Iraq are attributable to a Sunni insurgency as opposed to a Shiite one. CNN reported in 2005 that a “study from the Project for the Research of Islamist Movements, an Israeli-based organization, found that…61 percent [of insurgency fighters targeting western troops] were Saudis,” 10 percent were Syrians, and even fewer were Iraqis. The Iraqi government has corroborated the Iranian narrative and has officially protested the US-terrorist designation.

The group has also garnered much critical attention due to its role in suppressing protests after the 2009 Iranian presidential elections and its subsequent detention of activists and rioters. The mass upheaval disputing the election results was attributed by the Iranian leadership to “foreign plots” undermining Iranian sovereignty and was often referred to as “the sedition” by IRGC commanders. The IRGC’s alleged mistreatment of detainees associated with the unrest was criticized by western governments who labelled the corps’ actions as a “crackdown on dissent” and denounced them as “human rights violations.”

The Corps’ funding as a conventional military force comes from its heavy involvement in the domestic economy; a point denounced by domestic critics in favor of privatization. The Revolutionary Guards have a sizable stake in oil, gas, natural minerals, banking, and various other sectors of the economy. Some estimates suggest that the Guard has ties with over 100 companies and “that the corps’ network of companies could be valued at around $100bn.”

Prior to the unilateral US designation, President Rouhani’s government had been taking steps to “curb the elite force’s role in the economy…The president [had] been seeking to open up the Islamic republic and attract foreign investment since he signed a nuclear accord with world powers in 2015.” Major General Mohammad Bagheri, the joint chief of staff of the armed forces, had been tasked with restructuring the corps’ economic activities. These efforts are now under threat as a result of President Trump’s measures. The country has united around the corps and begun reciprocity measures against the US.

Failed Attempts against the Guards

External pressure and sanctions have only boosted the presence of the IRGC in Iran’s domestic economy in the past and elevated its standing and influence in the country. To this effect, Iran has increased the budget of the Revolutionary Guard Corps as retaliation to US sanctions and has allocated $520 million for the country’s controversial ballistic missile program. After Trump’s recent statements against the IRGC, Iran and the Moderates are united in backing the Revolutionary Guards. In a massive display of support, “all members of parliament, including reformist leader Mohammad Reza Aref, Speaker of Parliament Ali Larijani, and outspoken MP Ali Motahari, as well as both reformist and conservative factions [recently] wore Revolution Guard uniforms.” The president and foreign minister have issued statements as well expressing their support for the corps and defending the group’s role as protectors of Iran.

According to a recent Al Jazeera report, “[f]or many Iranians, being placed in the same category as groups like al-Qaeda or ISIL will be seen as a major escalation, adding that Iranians are now more likely to support a ‘more aggressive’ approach by their government when dealing with the US.” Labeling the IRGC as terrorist group is akin to labeling the Iranian people as terrorists. This will further antagonize relations with the West and ruin any potential plans for peace. Iran’s Press TV reported on 12 April that “[f]ollowing Trump’s declaration on Monday, Iran reciprocated by designating the US Central Command (CENTCOM), the portion of the US military responsible for protecting American security interests in the Middle East and the Horn of Africa, as a terrorist organization.”

President Trump’s decision has only served to rally the Iranian people around the IRGC in opposition to the United States and its policies. Addressing the Iranian nation, President Rouhani reiterated, “the Revolutionary Guards are not a military entity. They’re in the heart of the people…We’re one society. We’re Iran. There are no differences between different factions in confronting the plots of our enemies.”