In 2010, the Supreme Court ruled that outside groups could spend money without limits on US political campaigns, opening the door to massive increases in independent campaign expenditures in the years that have followed. In new research Wendy Hansen and Michael Rocca find that despite concerns over the rise of corporate influence on politics, much of this increase in campaign expenditures has not come from the largest companies or those who are in charge of them, but from high net-worth individuals.

It has been almost ten years since the Supreme Court’s landmark Citizens United v. Federal Elections Commission decision. Of the key consequences of the Citizens United decision, two stand out. First, it allowed outside groups, most notably corporations and labor unions, to spend money out of their general treasuries on “express advocacy” and “electioneering communications” without limits. Prior to the ruling, corporations and unions were restricted under the Taft-Hartley Act of 1947 from making independent expenditures (IEs) in support of or opposition to federal candidates. Second, it opened the door for the creation of “Super PACs,” political committees registered with the Federal Elections Commission (FEC) that make independent expenditures (IEs) to expressly support or oppose candidates to federal office but cannot contribute directly to federal candidates. Since they only make IEs, Super PACs can accept unlimited amounts of contributions from individuals, corporations, and unions.

In his 2010 State of the Union Address, President Barack Obama criticized the Supreme Court’s Citizens United ruling for reversing “a century of law to open the floodgates for special interests… to spend without limit in our elections.” Adding to the drama of the moment was Justice Samuel Alito’s response; he appeared to respond to the President’s criticism by mouthing “not true.” Did the floodgates open? Figure 1 below suggests that they may have. 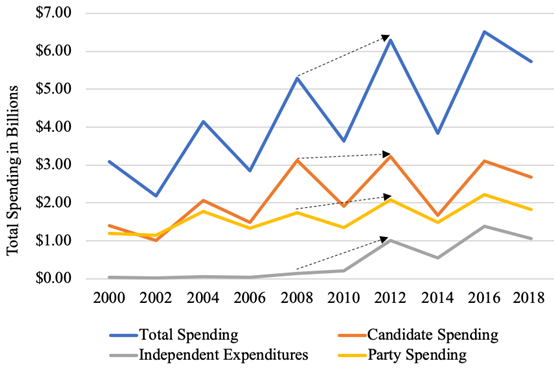 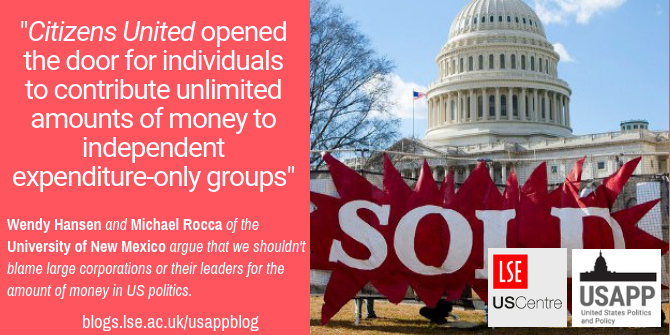 “Photo by Brendan Hoffman” by Public Citizen is licensed under CC BY NC SA 2.0

But to what extent are corporations – the main subject of the Citizens ruling – to blame for this increase? And how has the post-Citizens environment been exploited by large corporations and their employees? Our research (here and here) suggests two conclusions: 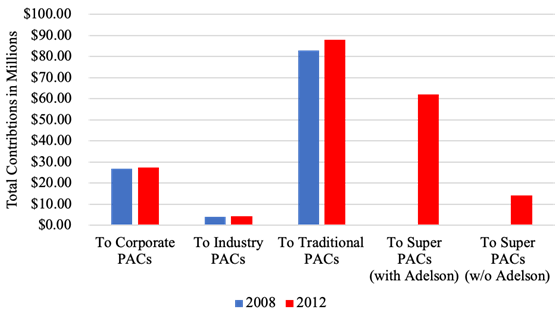 NOTE: Figure 2 depicts total contributions to Super PACs both including and excluding Sheldon Adelson of Las Vegas Sands, who alone contributed $48,346,625 to Super PACs in 2012.

That is not to say, of course, that Citizens United did not have a dramatic effect on other types of electoral spending. It most certainly did. What was the source of the increase, if not corporate spending? It was, in short, individuals. Indeed, Citizens United (and the rulings that followed) opened the door for individuals to contribute unlimited amounts of money to independent expenditure-only groups (Super PACs). In all, according to the Center for Responsive Politics, over 60 percent of all Super PAC donations came from individuals. But few were leaders of Fortune 500 companies. Indeed, of the top one hundred individual contributors to outside groups in 2016 (including Super PACs), only six were affiliated with a Fortune 500 company:

What does this mean for representation? In The Semisovereign People, E.E. Schattschneider argued that pressure politics is selective, involving only a small minority. The system is “skewed, loaded and unbalanced” representing only the upper economic class. Our findings suggest that the US has moved to an even further extreme where representation is no longer dominated by a small number of select groups, but a small number of individuals who are able to dominate the system.

Wendy L. Hansen – University of New Mexico
Wendy L. Hansen is a Professor of Political Science at the University of New Mexico. She has broad research interests in political science and economics, with emphasis on the role that individuals, corporations and government institutions play in decision-making over a wide range of public policy issues, including money in politics, campaign finance reform, international trade, human rights and refugees.

Michael S. Rocca – University of New Mexico
Michael S. Rocca is an Associate Professor of Political Science at the University of New Mexico. Professor Rocca’s subfield is American politics and his primary research and teaching interests relate to American national institutions, particularly the US Congress, as well as campaign spending US elections.

May 31st, 2019|Elections and party politics across the US, Michael Rocca, Wendy Hansen|0 Comments
Previous post Next post