The Justices of the United States Supreme Court are not bound to stay silent – every year the nine justices give speeches and talks across the country. In new research, Christopher Krewson examines the effects these speaking events can have on the public’s opinion of the Court. Through a survey of law students, he finds that respondents’ were more favorable, and felt that the Court was less politicized, following an event with Justice Sotomayor.

It’s October 5, 2018, and Justices Sonia Sotomayor and Elena Kagan are speaking before an audience of 3,000 Princeton students and alumni. Earlier in the day, the United States Senate had voted to limit debate over Supreme Court nominee Brett M. Kavanaugh and thereby move towards a final vote on his confirmation as soon as the following day. As Senator Flake described a week earlier, the country was “being ripped apart” over the controversy surrounding the nomination. Would Sotomayor and Kagan respond to the elephant in the room?

Of course they did, at least indirectly. In particular, Justice Kagan emphasized the importance of the Court’s “reputation of being fair, of being impartial, of being neutral, and not being simply an extension of the terribly polarized political process and environment that we live in.” The way in which Justice Kagan defended the Court was reminiscent of how Chief Justice Roberts responded to President Trump’s negative characterization of the courts in 2018: “We do not have Obama judges or Trump judges, Bush judges or Clinton judges. What we have is an extraordinary group of dedicated judges.”

Can sitting justices influence public support for the Court as they interact with the public “off the bench”? The potential is there. Data collected from SCOTUS Map reveals that justices often make various types of public appearances throughout the United States. These data aggregated in Figure 1 below, shows that on average the justices make 166 appearances each year. Seventy-five percent of those appearances involve the justices giving some type of public speech. 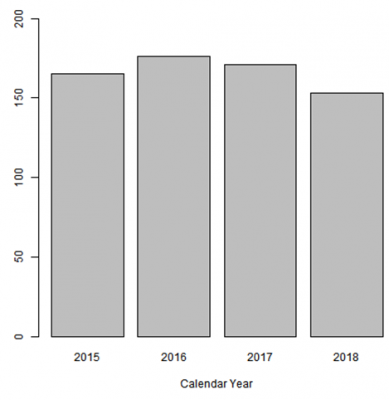 To understand how justices shape public support for the Court off the bench, I took advantage of Justice Sotomayor’s relatively recent law school visit and speech at the University of Wisconsin-Madison. Specifically, I sent a survey to law students attending the events either shortly before or shortly thereafter. I also sent a survey to online respondents with the same survey questions and I provided some online respondents with a short newspaper article about Sotomayor’s speech to read before answering the questions. By comparing the responses of those exposed to the speech with responses from similar individuals not exposed to the speech, we can understand how judicial speeches shape public support for the Court.

Recently, scholars have begun to accept a very simple idea: judges want to be liked and respected by others who are important to them. In other words, not everything a justice does is a calculated, strategic decision to maximize some legal or policy goal. Rather, justices also care about their self-image and seek to cultivate it. To measure personal favorability, respondents rated their favorability towards Justice Sotomayor on a scale from 0-100, with higher values meaning they felt more favorable towards her.

Law students responding after the events rated Justice Sotomayor five points higher on this favorability scale than law students who took the survey before attending. Among online respondents, the difference between those who read and did not read about the speech was sixteen points (an effect three times as large as the effect among law students). Figure 2 below shows these differences in favorability. The points show how much higher those exposed to the speech rated Justice Sotomayor than similar individuals not exposed to the speech. Bars represent ninety-five percent confidence intervals (or estimates of uncertainty). 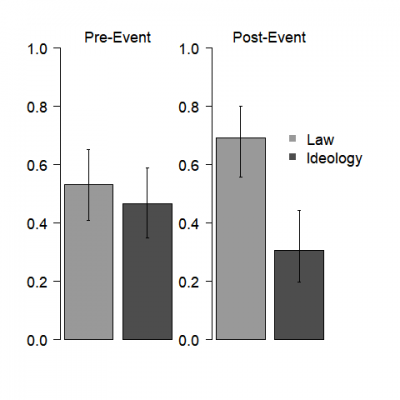 When Justice Kagan spoke to her Princeton audience, she feared that her Court would become “simply an extension of the terribly polarized political process and environment that we live in.” In other words, she feared the politicization of the Court. I measured the extent to which respondents felt “members of the Supreme Court have become more political in their behavior and decision making in recent years” on a scale from 1-5, with higher values indicating perceptions of greater politicization. For law students, we found no effect. For online respondents, we found a strong effect. Those who read of the speech online were much less likely than other online respondents to agree that the Court has become politicized in recent years. 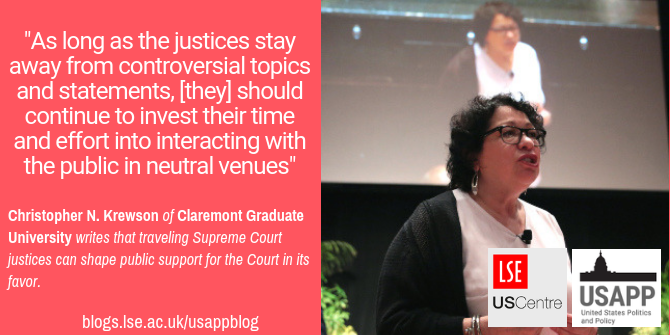 “Sonia Sotomayor” by Gage Skidmore is licensed under CC BY SA 2.0

Finally, I consider a key aspect of the Court’s legitimacy by measuring how strongly respondents “defer to Supreme Court decisions out of a feeling of obligation to the institution rather than out of fear of punishment or anticipation of reward.” I again use a 5-point scale with higher values meaning greater institutional loyalty. As before, I found no effect among law students. Whether they attended the events or not, law students were loyal to the Court. Among online respondents, I found much more variation. Indeed, those who read about the speech were more likely than those who did not to express institutional loyalty towards the Court.  The results among online respondents for both Politicization and Institutional loyalty are shown in Figure 4 below. 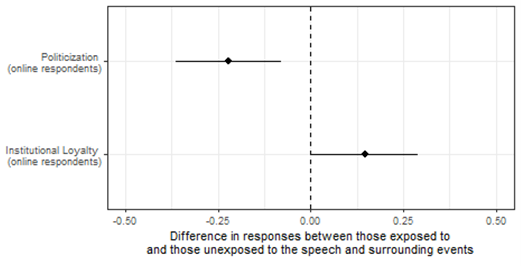 It appears that justices can alter public support for themselves and the Court through their public appearances. As long as the justices stay away from controversial topics and statements, the data suggests that justices should continue to invest their time and effort into interacting with the public in neutral venues.

Christopher N. Krewson – Claremont Graduate University
Christopher N. Krewson is an Assistant Professor in the Department of Politics and Government at Claremont Graduate University. His research focuses on judicial decision-making and the consequences of judicial behavior on public support for the Court. His recent publication in Political Research Quarterly, “Save This Honorable Court: Shaping Public Perceptions of the Supreme Court Off the Bench,” shows how judicial speeches can have bounteous positive effects on public support for justices and the courts.