Like the US, until recently Italian politics had virtually never seen a city mayor elevated to its highest office. That all changed with the appointment of the former Mayor of Florence, Matteo Renzi as Prime Minister of Italy in 2014. Emanuele Monaco sees close parallels between the rise of Renzi and the presidential ambitions of the Mayor of South Bend Illinois, Pete Buttigieg. Mayors, he writes, are able to tap into public disillusionment with the national political establishment by promoting a more personal and hands-on style of leadership.

Politically speaking, the road to the White House doesn’t proceed down an urban street. That’s a given for anyone studying the history of American politics, and it’s a phenomenon historically not confined to the US. The only person to be presidential nominee on the ballot directly from City Hall was DeWitt Clinton, Mayor of New York City in 1812 (spoiler, he lost to James Madison). In more recent times New York has been the only mayoral seat from which to pursue a presidential bid; John Lindsay in 1972—who bowed out shortly after the campaign started—and ‘America’s Mayor’ Rudy Giuliani in 2008, who had a similar experience, although he ran for president a few years after leaving office. Historically, the only president to have ever been Mayor of a major city, Buffalo, was Grover Cleveland, but with a governorship of the state of New York in between.

The old Jeffersonian notion of a farming nation long held sway over the country, giving urban areas an unsavory reputation, and creating a political divide still visible today between cities and rural areas. When people thought about City Hall, they associated it with corrupt and ineffective government, one that only took and consumed resources, whereas suburbs and rural areas were small, well-managed and hard-working. It is clear then why mayors have faced many difficulties seeking votes outside the city boundaries.

Now all this seems to be changing. Of the 2020 crowded Democratic primaries six candidates have been mayors in the past (John Hickenlooper, former Mayor of Denver, Julian Castro, of San Antonio and Cory Booker, of Newark) or still are (Wayne Messam of Miramar, Bill de Blasio of New York City and Pete Buttigieg of South Bend).

As cities are changing, so are their mayors

That’s because, in this age of global urban conglomerates, when cities have a great comeback story to tell, so do their mayors. The demographics of these areas are also evolving. Suburbs and inner-cities are getting, some more slowly than others, more diverse, with increasingly blurred lines of divide between them, making mayors as heads of large metro areas, dealing, like in small countries, with significant issues like regional transportation, infrastructure, poverty, organized crime and housing development. Often, they are filling the empty space in these areas that has been left by the federal government: there hasn’t been a federal urban program since the 1970s, and the US Department of Housing and Urban Development still has the second-smallest budget of all federal departments. Consequently, cities and their often large suburbs are converging into more unified voting blocs. If there is a lesson to be learned from recent elections it is that most Democratic candidates, usually more popular in the city, are energizing voters from broader metro areas including more suburban districts, with an increasingly diverse and liberal population.

For Italians, this is nothing new. Italy, like the US, historically never trusted mayors enough to rise to the national government. From 1946 to 2014 out of 26 Prime Ministers no one had previously held the office of mayor. Then came Matteo Renzi, whose political career proved meteoric. After having served as the youngest provincial president (29 years old) in Italian history, in 2009 he became Mayor of Florence. His program for the city was to create a brand, modernization, and to make its politics more in touch with its citizens (whether he managed to do so or not is still open to debate). 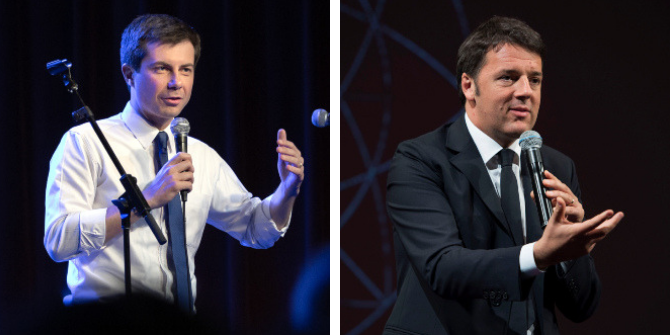 Moreover, in a country where mayors are starting to enjoy increasing popularity, Renzi was thought to be in the right position to revolutionize Italian national politics, starting with its principal political movement on the left, the Democratic Party (PD). The national media started giving Renzi the nickname “il Rottamatore”, or “The Scrapper”. Renzi’s remarkable rise, and at such a young age (by then he was 39), made him more electorally attractive in comparison to the old guard. It was only a matter of time before he would be called to form a government, after winning the party’s primaries in 2013.

A Mayoral Challenge to the establishment

What is striking about Renzi is that he used his position of Mayor of Florence to put himself outside the usual track to prominence within the PD. He kept referring to himself as ‘Italy’s Mayor’, promoted a reform of the Italian electoral system to mirror closely the one in the cities, created an image of leadership that more greatly resembled that of a big-city mayor than old party members with a parliamentarian pedigree. For some time, he symbolized a cultural change in the Italian centre-left. The party progressively shifted from being representative of manufacturing and working areas, especially in the north, to be the natural home for voters from growing rich and liberal cities, like Bologna or Milan, eager for change and young new leaders (something that fueled the rise of both Renzi and initially the 5 Star Movement). Renzi was the end of a process begun by Silvio Berlusconi in the mid-1990s, with the position of Prime Minister gaining more and more of a “presidential” image, someone with the ability to catalyze consensus and speak for the party and its electorate. What boosted his rise was the growing disaffection for the old parties’ establishment and a desire for a new kind of leadership, more personal, in direct contact with the electorate. Indeed, Pete Buttigieg echoed this in a recent interview when he spoke of “the kind of leadership only mayors have”.

Back in the US, like in Italy, trust in the political establishment is at such a historic low that for many, the idea of a mayor having to run for Congress before thinking about the White House has lost its relevance. “Some people even said, you have to run for Congress first,” Buttigieg told a crowd a month ago. “I mean no disrespect to the United States Congress, but that is a very different job,” he said. “And I would argue that our country right now would be a better place if Congress looked more like the community of American mayors, and not the other way around”. Unlike De Blasio, Garcetti, or Castro, Buttigieg seems to stand out for not coming from an iconic American city like Los Angeles, New Orleans or New York. Besides, he doesn’t have a record of managing sprawling bureaucracies or navigating significant crises. The 37-year-old South Bend mayor comes from a constituency of only around 100,000 people. However, still, for him, the “immediacy and backyard accountability” of even small-town mayorship would bolster any presidential bid.

In a time when Washington seems more and more like a “swamp” to be drained, a place where effectiveness and progress get stuck in a deadlock of ideological divisions and petty politics, it is of no surprise then that many Americans yearn for a new kind of leadership, pragmatic, action-oriented, and outside the Washington establishment. Could an educated young mayor from one of the fast-growing and ex-manufacturing cities of the Midwest and the Rust Belt (or also the ones in the South, such as Houston, Austin or Phoenix) energize enough democratic voters to win against candidates with more “presidential” pedigrees, as Renzi did in Italy?