As the United States gears up for its next presidential race next year, the United Kingdom is also in the throes of a contest to elect its next leader. While both contests involve presidential style debates and a great deal of public scrutiny, Robin Pettitt writes that in the UK, only the 160,00 which are members of the Conservative Party will decide the next UK Prime Minister, compared to millions in the US’ primary electorates.

While much US attention has turned to the Democratic presidential primary contest, on the other side of the Atlantic in the UK, another political party is in the process of choosing its next leader, and the country’s next Prime Minister. A close look at the UK Conservative Party’s leadership contest provides an instructive contrast to the early moves to select the next US President. The downside of the Prime Minister’s ‘indirect’ democratic mandate is shown very clearly in the current situation. The fact that in the American system you not only vote directly for an individual to be President, but for a ‘ticket’ which include a replacement should the President become unavailable, means that you know what you are voting for far more than is the case in the UK. Obviously, in the line of succession beyond the Vice President the ‘product’ you are voting for becomes somewhat less clear, but, with a few notable fictional exceptions (The West Wing; Designated Survivor), that has not been relevant. A Vice President can of course also become unavailable, but again, this is not a common occurrence.

By contrast, what you vote for in the UK is far less clear, as the current Conservative Party leadership election illustrates. Voters do not directly elect the Prime Minister, but elect Members of Parliament, which then form a majority in some form. Effectively, the choice for Prime Ministers is between the leaders of the two main parties (usually Labour and the Conservatives). However, once the current Prime Minister, Theresa May, finally threw in the towel on May 24th, the process of selecting her successor, already unofficially underway for months, formally started. Because the Conservative Party commands a majority (if only just, and with the help of Northern Ireland’s Democratic Unionist Party) selecting a new party leader also means selecting a new Prime Minister. That in itself is not unheard off, and has happened several times before. In addition, it would also be incorrect to say that a new Prime Minister appointed in this manner does not have democratic legitimacy. This is to confuse the UK’s parliamentary democracy with something more presidential. UK voters do not directly elect the Prime Minister, and democratic legitimacy rests in having the support of a majority in parliament. This has not prevented both the Conservatives (when Gordon Brown took over from Tony Blair) and the Labour Party (with the current Conservative leadership election) demanding a new election in the name of democratic legitimacy. This is entirely self-serving and (knowingly or not) constitutionally illiterate.

However, a change of leader in a governing party does raise the issue of whether people are getting what they voted for at the most recent election. In the American context a Vice President taking over from a President was elected to do exactly that, and voters knew the double act they were voting for. That is not the case in the UK. Obviously, there is the manifesto the party ran on, but a new leader may still have different priorities within a given manifesto. 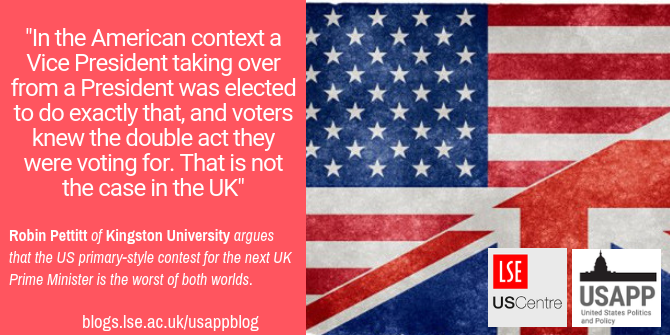 “English Language Grunge Flag” by Nicolas Raymond is licensed under CC BY 3.0

Doing it US style – sort of

In addition, the picture is further confused by the fact that the current leadership election process in the Conservative Party is looking a lot like the Democratic primary. There was a televised debate between contenders for the position; there are publically streamed hustings; and there is intense media reporting on every minute detail of the contest. However, unlike the American context where a very sizable proportion of the overall electorate can vote in what really is an internal selection process. Only Conservative Party members – a mere 160,000 people, or about 0.3 percent of the electorate – in the UK can vote on who will be the next Prime Minister. In addition, even having won the nomination as Presidential candidate, the winner will still have to face the public in order to become chief executive. The UK’s next chief executive will be whoever can attract at least 80,001 votes from the membership of one party.

We therefore have a situation where in the 2017 general election, voters were asked to effectively make a choice between two contenders for the position of Prime Minister.  That choice is now being overturned in a contest that involves a presidential style direct democratic mandate, with all the public scrutiny such a contest attracts, but with a, relatively speaking, vanishingly small electorate. The primary/ presidential election ‘feel’ of the Conservative Party’s leadership election sits very awkwardly with the UK’s parliamentary system. Whether a secretive group of ‘men in grey suits’ making the decision between themselves in smoke filled rooms is better is debatable. However, it does show that importing a process with the feel of a presidential primary/election into a very different political system makes for uneasy viewing.

The only really obvious answer would be to import a further element of the American system, and make the electorate much larger. A version of the American closed-primary where registered supporters of a party can vote would open up the process to a much wider range of people, and alleviate some of the awkwardness of a very public election process, with an extremely small electorate. The winner would still not have to face the electorate at large in a general election, but would nevertheless be able to point to some measure of wider support. This process does run up against the private nature of political affiliation in the UK. Politics is generally seen as something done by consenting adults behind closed doors, and the idea of some form of official registration of political affiliations seems alien in the UK context. However, that may be a price to pay for dealing with the uncomfortable sight of 0.3 percent of the electorate determining who will be the next Prime Minister.