In The Code: Silicon Valley and the Remaking of America, Margaret O’Mara provides a new account of the region’s evolution that brings the US government into the story. The book offers a compelling narrative that tracks the key players and events that have underpinned Silicon Valley’s tremendous, but messy, rise, writes Robyn Klingler-Vidra, while also underscoring the gender imbalance and casual misogyny that has been a longstanding characteristic of its culture. 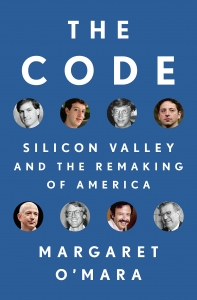 Tech giants like Facebook and Google dominate headlines, out of a mix of curiosity, admiration and concern, for the social value they provide, the wealth they have and – continue to – create and the enormous power they have vis-à-vis unprecedented access to the world’s information. Global interest in Silicon Valley, where these giants were born and still call home, has never been greater. Policymakers around the world, as well as technology pundits, are interested in what made Silicon Valley, as the phrase has become shorthand for a vibrant cluster of innovation and entrepreneurship. At the same time, there’s a growing call for alternative models, for ecosystems that have a more inclusive character or where the state has a more evident role. Analysts are also interested in knowing the ‘secret sauce’ in order to assess its ability to maintain technology leadership over rising centres, notably China (so Kai-Fu Lee explored in his excellent AI Superpowers: Silicon Valley, China and the New World Order).