Earlier this month, President Trump tweeted that Democratic House Member Ilhan Omar – along with three other Democratic women of color – should “go back to where you came from”. Jamil Scott argues that Trump’s racially coded language has activated racial prejudice among his followers without even explicitly mentioning race. Social media, she writes, is now another avenue for racial animus to be expressed towards women of color in Congress.

Social media is changing how public officials interact with their constituencies and each other.

During the 115th Congress, almost all the Representatives had a presence on one or more social media platforms and this pattern shows no sign of changing in the 116th Congress. It is indeed the freshmen of the 116th Congress, like Alexandria Ocasio Cortez (D-NY) and Ilhan Omar (D-MN), who have been the most vocal on social media. This increasing use of social media for political communication is meaningful because the majority of the adults in the US report using at least one social media site and members of Congress are paying attention to what their constituents are sharing.

Moreover, social media has taken on even more importance given that President Trump has made social media his venue to use the bully pulpit.  His influence on Twitter continues to grow along with his follower count, which is currently at 62.2 million. The public no longer has to wait to hear comments from politicians on the news or in the newspaper because they can get these comments in real time on a Facebook or Twitter feed. It is exactly President Trump’s unchecked comments on Twitter that have created cause for concern in recent days with his continued critiques of Representatives Alexandria Ocasio-Cortez, Ilhan Omar, Ayanna Pressley (D-MA), and Rashida Tlaib (D-MI).

Despite the popular conversation about whether President’s Trump’s comments are racist, in recent research, I along with co-author (Adam Enders), maintain that a statement or policy need not make explicit mention of race to be racist. In fact, it is the use of racially coded language, like “go back to where you came from”, that activates racial prejudice without even mentioning race. We show that this communication strategy has been effective in creating an increasing link between racial prejudice (measured as racial resentment) and attitudes about political issues over time. Moreover, we show that this relationship persists in a series of statistical models in which we control for factors like political values, attitudes about the size of government, sociodemographic characteristics and more. 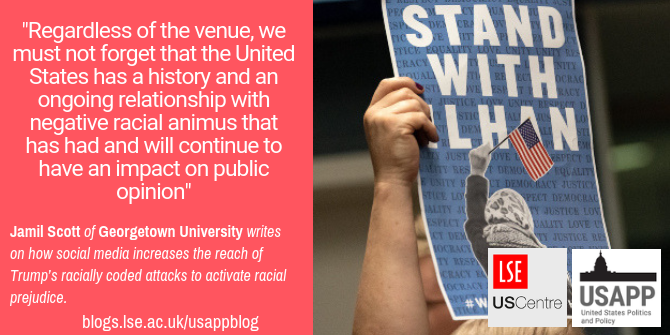 “A Stand With Ilhan sign held by a supporter at MSP Airport in Minnesota” by Lorie Shaull is licensed under CC-BY-2.0

Thus, it is not by accident that those initial tweets about Ocasio-Cortez, Omar, Pressley, and Tlaib have riled up strong negative emotions and prejudices toward these women of color who are members of Congress. In fact, in President Trump’s most recent public appearance the crowd can be heard chanting “Send her back”, in reference to his mention of Ilhan Omar, who is an American citizen. Furthermore, his subsequent tweets over the last couple of days have only served to reinforce his initial statements and has sparked the creation of opposing hashtags- #IStandWithIlhan and #IStandWithTrump. As one might imagine tweets associated with the former hashtag show strong support for Ilhan Omar while tweets associated with the latter show vehement opposition to the Minnesota Congresswoman.

It must be remembered that this is not the first time that a woman of color in Congress has been the target of racialized political attacks. In 2017, Black women took up the charge to talk about their own negative racial experiences in the workplace, under the hashtag #BlackWomenAtWork, after Bill O’Reilly saw fit to criticize California House Member Maxine Waters’ hair instead of commenting on her speech on the House floor. Maxine Waters even used the hashtag herself to address the controversy.

As social media begins to take a stronger foothold in American politics, we will likely see more of these interactions between political actors that play out online and create very strong opposing viewpoints. Regardless of the venue, we must not forget that the United States has a history and an ongoing relationship with negative racial animus that has had and will continue to have an impact on public opinion.