In Occult Features of Anarchism, with Attention to the Conspiracy of Kings and the Conspiracy of the Peoples, Erica Laglisse challenges the assumption that rationality and secularism are at the centre of anarchism, instead showing how this is rooted in a disavowal of its roots in religious and occult thinking, with implications for how we view anarchism and conspiracy theories today. This is a rich work that confronts deep-seated contemporary questions about anarchism, conspiracy theories and the nature of knowledge, writes Bethan Johnson.

If you are interested in Occult Features of Anarchism, you may like to listen to the podcast of an LSE event in which Erica Lagalisse discusses her book, recorded at LSE on 20 March 2019. 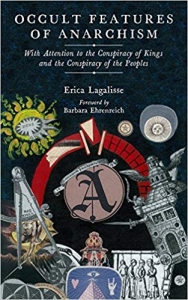 We live in an age of conspiracy theories. In the last decade, millions of messages on social media, interviews on YouTube or on podcasts and references in political speeches tell tales of QAnon and the American ‘deep state’, of the British royal family as shape-shifting lizards and of how terrorist attacks are the work of governments or faked. Add to these the influential anti-vaccination movement and climate change denial, and it is hard to deny that we live in a moment when many wonder if their lives and futures are in the hands of a small yet nefarious cabal of people. We also live in a time when anarchists are more visible than they have been in many years due to their roles in the Occupy Wall Street movement and Antifa. Thus, in a timely fashion, Erica Lagalisse’s book, Occult Features of Anarchism, with Attention to the Conspiracy of Kings and the Conspiracy of the Peoples, seeks to marry these new and contemporaneous developments in our (political) lives, connecting them in ways we perhaps had never considered.

Written more as a treatise in two parts than a book, anthropologist Lagalisse attempts to study concepts of anarchism and the occult in a part historical, part anthropological and part autobiographical/ethnographical work. In establishing a foundation for her research, Lagalisse first effectively demonstrates, partly through anecdotal evidence as well as through more traditional academic lines, how modern anarchists have come to value ideas of rationality, secularity and a particular kind of empiricism, which has alienated those whose activism is constructed along alternative lines, with particularly patronising attitudes towards, and through the silencing of, women of colour and Indigenous women.

Lagalisse then begins a series of chapters reminiscent of an intellectual and book history, tracing the dissemination and reception of particular books. She tracks how the perceived valuing of secular, rational and empirical modes of thinking contravene reality. First, Lagalisse tackles the topic of secularisation and its relationship to anarchism as a function of historic ideas about the role of the state in people’s lives. She presents arguments for the notion that the dichotomy of the ‘individual’ and ‘society’ that undergirds politics is infused with cosmology. ‘The transcendent God of theological dualism’, she writes, ‘can be found just beneath the surface of every argument for centralized authority, including most canonical social theory (which anarchists, we may note, tend to recognize as “authoritarian”)’ (17). Thus, despite the protestations of secular ideology as part of anarchism, she contends that ‘modern anarchism has never been purely atheist except in name’ (18).

In subsequent chapters, Lagalisse works to demonstrate how various forms of knowledge now valued as secular remain infused with religious and notably occult thinking. She traces much of modern science and mathematics through the ideas of Corpus Hermeticum, a mystical document about the integration of all concepts into one entity and the human as the microcosm of the universe itself. She shows the influence of these documents on specific influential Enlightenment and Renaissance individuals who are now identified as men of science, rather than of mysticism: these figures include Réné Descartes, Johannes Kepler and Nicolaus Copernicus. To this point, Lagalisse writes: ‘In retrospect, the European historian has enjoyed categorizing certain forms of worldly operation as “magical” and others as “scientific,” yet the distinction is anachronistic’ (29). Lagalisse goes on to connect these ideas to the rise of various associations now affiliated with some of the most famous conspiracy theories in the Western world: namely, the Freemasons and the Illuminati. She charts how specific men helped to found these societies, and how others expanded their reach.

Amidst all this, Lagalisse deftly defends herself against the charge of having fallen into the conspiracy theory trope herself, clearly noting when the connections she seeks to draw between thinkers or ideas are more speculative or tenuous as regards evidence. She meanwhile does not devalue all of anarchism simply because it has forgotten some of its history. ‘The fact that Marx builds on Hegel who builds on the Hermetica does not necessarily mean they are wrong,’ she writes. ‘It simply means that a vast amount of “rational” social theory relies on archetypes and geometrics of thought stemming from a specific, historiographically situated cosmology—as does the notion of “rationality” itself’ (70). Thus, Lagalisse argues, the use of rationality or secularity to claim a kind of superiority within anarchist circles should be taken as a castle built upon sand.

Contrasting this charted history of ties between the rational and the occult, in the final section Lagalisse transitions into perceptions surrounding belief in modern conspiracy theories. In doing so, she demonstrates how the term ‘conspiracy theory’ has been used as a rhetorical cudgel with which to beat back and delegitimise. She claims that while conspiracy theorists are associated with the image of the solitary white man living in his parents’ basement or with a bigoted Donald Trump voter in 2016, these images are stereotypes. They also betray certain value judgements of the kinds of people who believe conspiracy theories, an epithet that is often associated with working-class people whereas wealthier people of the same opinion avoid such judgement.

In its pursuit to hold a mirror up to anarchism and those who consider conspiracy theories to be the stuff that only uneducated, bigoted people could believe, Occult Features of Anarchism is quite effective. In one of the best interventions of the book, Lagalisse proves especially incisive in her analysis of the elitist and gendered nature of ‘truth-telling’ and ‘magic’. One discussion of particular note is that of how, during the period when magic was being converted into science and mathematics, women were contemporaneously persecuted in ‘witch trials’:

After all, as “magic” itself was gaining respect in certain elite quarters, women were being persecuted as witches precisely for practising “magic,” wherein we may observe that the perceived danger was not “magic” itself but the gender of its practitioner (30).

This discussion illuminates how elite, educated men (not the male peasants who are often blamed) led the hunting of women who had acquired a great deal of knowledge about the human body, and that this was therefore a gendered and classed persecution.

Lagalisse also levels well-articulated criticisms of anarchism itself for not being as inclusive as is often presented. She writes that:

As any anarchist around can see, fluency in a particular vocabulary, knowing the names of certain historical figures, and being vouched for by someone “in the know” is all requirement for entry into the anarchist club, as is a commitment to a specific ideological constellation informed by the history of its practice (81).

Convincing in many areas, Occult Features of Anarchism would nonetheless have benefited from being slightly less like a treatise. Lagalisse discusses her vision for the text as having utility for academics to consider how they study topics such as anarchism, the occult and conspiracy theories, and for those engaged in political activism (108). For academics, though, more work could have been done to flesh out the explicit connection between the earlier sections on anarchism and its links to the occult and the later sections on modern conspiracy theories, as well as simply more engagement with the book history element of the earlier chapters.

While Lagalisse does stimulate reflection upon who is classified as a conspiracy theorist and who gets to do this classifying, I also left the work not entirely convinced by her flattening of the definition of conspiracy theory and arguments about how conspiracy theorists are viewed by the rest of the society. Do I really think of people who talk about ‘Jewish lizard bankers’ (95) in such simple terms as ‘conspiracy theorist’? Are people sceptical of vaccines really being treated with the same degree of contempt as those who think that 9/11 was government-sanctioned?

Meanwhile, in her introduction, Lagalisse makes reference to the idea of enticing people away from conspiracy theories and other beliefs: ‘Of course, reasoned debate will not be sufficient to turn devoted neo-Nazis away from their project, but it may affect the future actions of those still sitting on the fence so to speak’ (11). The question then becomes of whose duty it is to convince people not to believe conspiracy theories. Often, this responsibility falls on the communities already victimised by a conspiracy theory. Given Lagalisse’s take on the difficulty many oppressed groups have being respected within anarchist circles, how does she reconcile this additional burden on their time? While this question does not have a simple answer, some discussion of it felt warranted.

Occult Features of Anarchism is a rich work that forces readers to confront questions about the nature of anarchism, conspiracy theories and knowledge. In many ways, it leaves us needing to do more than simply consider the arguments on the page. Perhaps this is particularly salient in this age of ‘alternative facts’ and conspiracy theories, and we are better for taking a little longer to consider what we consume.

Bethan Johnson – University of Cambridge
Bethan Johnson is a doctoral candidate in the Faculty of History at the University of Cambridge. Her doctoral research explores the rise of militant separatist groups in Western Europe and North America in the mid-Cold War-era. The work explores the life-cycle of violent ethno-nationalism, driving forces behind radicalisation along separatist lines and authoritative methods for ending and avoiding deadly conflicts. Her master’s dissertation, also undertaken at the University of Cambridge, studied the manipulation of cultural nationalism for political unionist purposes by Lady Llanover in nineteenth-century Wales.