Being a mayor in America can be a dangerous job. In July last year, Jimmy Matta, Mayor of Burien, Washington State was attacked at an outdoor party; this past February, the 71-year old outgoing Mayor of Abita Springs, Louisiana, Greg Lemons, was beaten up near his home. And in March, Mayor David Northcutt of Achille, Oklahoma was knocked unconscious at a highway convenience store.

To determine just how common this sort of violence is, we conducted the first US study to survey experiences of physical violence and psychological abuse (V/A) among holders of elective office. With a focus on mayors, we find that they face high levels of physical violence and psychological abuse and that social media are the most common channel for psychological abuse. We also find that although experiences of V/A acts are widespread across types of cities, overall, female mayors, younger mayors, mayors in strong mayoral systems (where they have significant appointment and veto powers), and mayors in larger cities are more likely than their counterparts to face episodes of V/A.

For this research, we defined physical violence as harm suffered to persons or property, and psychological abuse as exposure to threatening or disrespectful, uninvited behavior, attention, or verbal contact.

We chose to focus our study on mayors because they live in their communities full-time, which may make them more visible and accessible than other officials, and, as executives, they may be perceived as most accountable for actions of city government. The data we report comes from a 2017 survey of mayors in US cities with populations above 30,000.

“Office of Mayor Betsy Hodges – Closed Door” by Tony Webster is licensed under CC BY SA 2.0

Mayoral exposure to violence and abuse is widespread

Social media is a key channel for abuse

Social media were the most common conveyers of abuse: about 70 percent of mayors reported such experiences compared to a third who experienced abuse through traditional media. Over 40 percent encountered abuse at a public meeting. These numbers are consistent with research in other western democracies.

Factors associated with physical violence and psychological abuse of mayors

Holding other factors constant, several factors are significantly associated with more frequent experiences of violence and psychological abuse and with a greater likelihood of experiencing at least one instance of this type of treatment.

First, some characteristics of cities matter: mayors of larger cities faced higher rates of V/A and were twice as likely to endure V/A than mayors of smaller cities. Second, some political factors are important: those in strong mayor systems were more likely face V/A. However, city partisanship was not related to violence and abuse. Third, demographic characteristics showed differences. Younger mayors were more likely to endure V/A than their older counterparts. Additionally, female mayors were more than twice as likely to have these experiences as men.

We also separated the data to compare the factors that affected the likelihood of experiencing physical violence versus psychological abuse. Results indicate that different factors contribute to each type of experience.

Why violent and abusive treatment of mayors matters for local governance

The results of this research matter because such experiences may affect mayors’ ability to focus on their jobs and continue their commitments to political careers. Indeed, 16 percent of our survey respondents said these experiences encouraged them to think about leaving office.

Second, female mayors in our survey faced more of these negative experiences than male mayors. Since, in 2019, only 21 percent of mayors in cities of 30,000 or above are female, efforts toward diverse representation may be negatively affected.

Third, experiences of V/A may deter newcomers from seeking public office in the first place. The personal costs of running for and serving may be calculated as exceeding the personal, political, or policy benefits of doing so.

Fourth, to the degree that law enforcement attention and resources need to be directed toward investigating threats against mayors and keeping mayors safe, less attention is available for protecting the wider population.

For the first time, this study brings into focus that the vast majority (80 percent) of US mayors face psychological abuse and a small but significant portion suffer physical violence – a set of findings that merit concern and further study.

Sue Thomas – Pacific Institute for Research and Evaluation
Sue Thomas is a senior research scientist at the Pacific Institute for Research and Evaluation (PIRE) who specializes in research at the intersections of social science, policy, and law. Dr. Thomas has published books, journal articles, book chapters, and encyclopedia articles in her specialties: women, politics and policy, and American government.

Jean Reith Schroedel – Claremont Graduate University
Jean Reith Schroedel is the Thornton Bradshaw professor of politics and policy at Claremont Graduate University. She has written or co-edited five books and more than forty journal articles. Her recent research has focused on voting rights issues affecting Native Americans and she has a forthcoming book, Native American Voting Rights: The View from the Trenches. 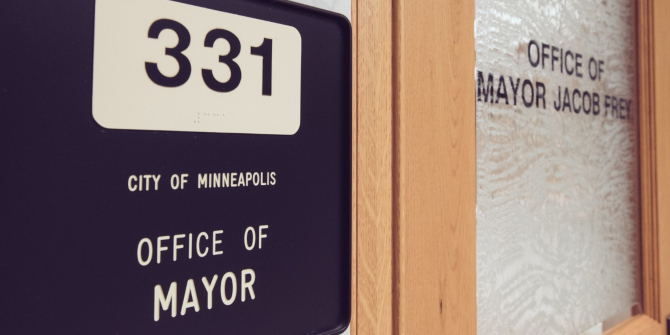