Nebraska has the distinction of being the only US state to be governed by a unicameral – or single chamber – state legislature. In new research, William B. Hankins examines whether – through a potential reduction in duplication – the move from two to one chamber in the 1930s had any effect on state government spending. By creating a counterfactual or synthetic Nebraska, he finds that while initially the state government would have spent more with two legislative bodies, after the 1940s the real Nebraska’s spending would have caught up with its virtual counterpart.

Between 1830 and 1937 all US state legislatures were composed of two chambers: a lower chamber, usually modeled on the US House of Representatives, and an upper chamber, usually modeled on the US Senate. However, in 1934, in a statewide vote, Nebraskans approved a constitutional amendment that would replace the 133 member two chamber body with a one chamber legislature. The 43 members of the Unicameral, as it became known, first met in 1937.

Such a significant change to the structure of a legislature leads to many important questions. In new research I focus on whether reducing the number of chambers in the legislature changes how much the legislature spends. Using data on 47 US states over the period 1915 – 1947, I find that Nebraska’s Unicameral initially spent less money per capita compared to what would have been predicted had the legislature retained its bicameral structure. However, by the late 1940s, these differences diminish.

Why should we expect the structure of the legislature to affect the level of government spending? To answer that question, it helps to briefly discuss the history of the Nebraska Unicameral. The champion of the Unicameral was George W. Norris, a US Senator from Nebraska. Sen. Norris was a quintessential Progressive Era liberal and these ideals fueled his desire to see his home state represented by a unicameral legislature. Sen. Norris believed that a unicameral legislature would be simpler and more transparent than a bicameral one. In his biography, Sen. Norris summed up his feelings about bicameralism writing “there is no sense or reason in having the same thing done twice, especially if it is to be done by two bodies of men elected in the same way and having the same jurisdiction.” 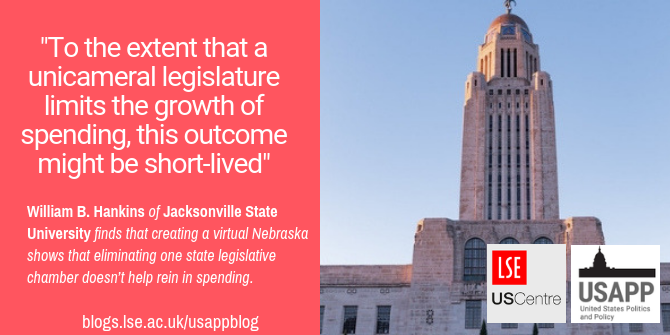 “Nebraska State Capitol Building, Lincoln” by Tony Webster is licensed under CC BY 2.0

The decision-making costs implied by Sen. Norris’s statement are also at the heart of academic research about the difference between bicameralism and unicameralism. Early theoretical work argued that if the two chambers represented different constituencies, the higher decision-making costs could constrain government spending compared to a unicameral legislature. However, as some research has shown, a bicameral legislature can mean more government spending since a legislator proposing a bill may need to promise support for even more members’ projects in order to get her bill passed.

The research mentioned above relied on comparisons of spending per capita across countries. Conversely, using data from the US states minimizes some unobserved differences that might exist between countries that makes estimating the relationship between the number of chambers and government spending complicated. Additionally, the unique case of Nebraska offers a way to examine what actually happened when a government changed its legislature.

To do this, I use a method of statistical analysis to create a counterfactual, or “synthetic” Nebraska that is a weighted average of the other states. Some states will be poor matches for Nebraska and the synthetic control method will not use data from those states. This synthetic Nebraska is used to predict what expenditures per capita would have looked like had Nebraska’s legislature retained its bicameral structure. I then compare spending in synthetic Nebraska to spending in the real Nebraska (not all states were used to construct spending per capita for synthetic Nebraska).

Figure 1 – State Spending Per capita in Nebraska and Synthetic Nebraska 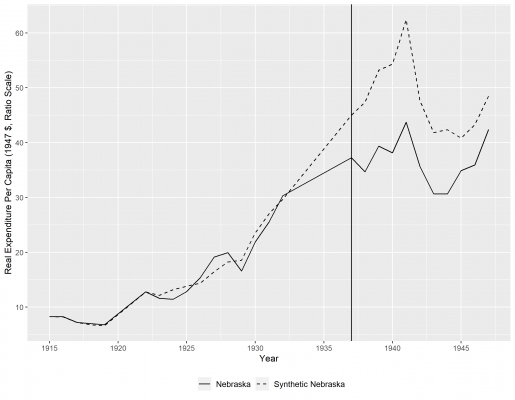 In order to ensure that this finding was unique to Nebraska, I reran my analysis forty-six times, each time assuming that one of the other states switched to a unicameral legislature in 1937 and not Nebraska. If my results are unique to Nebraska, then the pre-1937 difference in spending per capita between the real and synthetic Nebraska should be relatively small compared to the post-1937 difference; and likewise the pre-1937 difference for the 46 additional analyses should be relatively large compared to their post-1937 differences. As Figure 2 below shows the ratio of these differences was largest for Nebraska. In fact, I found that if the 1937 switch to a unicameral legislature was randomly distributed among the available 47 states, the odds of obtaining the result for Nebraska would be approximately 2.13 percent. 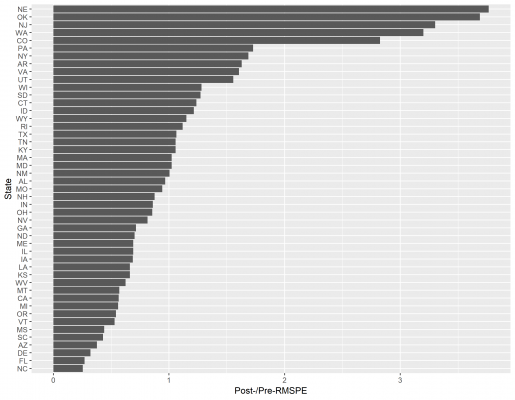 What lessons could Nebraska’s experience offer to those who hope to limit spending by their state or national legislature? To the extent that a unicameral legislature limits the growth of spending, this outcome might be short-lived. To that end, policymakers promoting structural changes to the legislature to reduce the level of government spending should also consider how such a change would affect other important legislative functions.