Even with the recent resurgence of urban living, the United States is a country of suburbs. There is plenty of debate about the full extent of this suburbanization, but some of it is clearly sprawl. Sprawl has an even more complicated definition, lending itself to a “I know it when I see it” interpretation. My working definition is excessive suburbanization; development that likely wouldn’t have taken place if developers and/or residents had to internalize the costs they impose on society. But does this kind of development induce higher spending on the part of local governments than it otherwise would have? In general, the answer is yes; however, it is complicated.

What are some of the reasons that normal suburbanization might turn to urban sprawl? In general, there are three reasons. First, developers may fail to consider the social value of open space. This leads an overzealous conversion of land from open space (like agricultural land) to residential or commercial uses. Second, individuals may fail to consider the social cost of their commuting patterns leading to housing being built far from employment centers. Finally, developers may fail to consider all the public costs of their developments. This last reason is the connection to local government spending. It has been suggested that it is costlier to provide public services in areas of sprawl because this type of development pattern fails to capitalize on economies of scale, often fails to optimize the location of costly capital facilities and leads to duplicative service delivery. More compact development patterns can help to contain these costs.

Densification, one potential remedy for sprawl, comes with its own potential impacts on local government spending. There could be economies of density whereby public costs are lowered because development and people are clustered closer together. There is another possibility, however. Because of physical proximity, providing public services could become more expensive; a concept referred to as “urban harshness.” The general logic is that dense urban areas require more “stuff,” traffic lights, police officers, teachers, than less dense areas to provide a similar level of public services. It is somewhat unclear which of these two views of sprawling (or not) development will impact public spending. 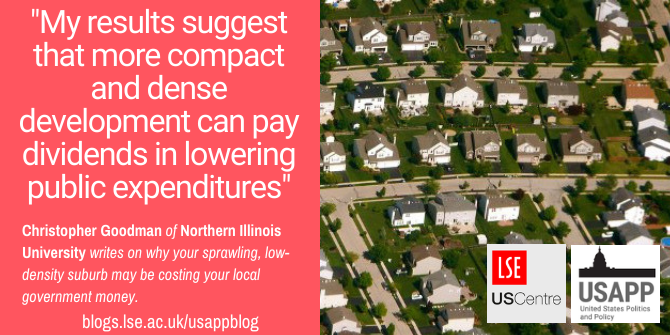 “Chicago suburbs from the air” by Scorpions and Centaurs is licensed under CC BY NC SA 2.0

I examine this relationship between urban development and public spending in metropolitan counties areas in the United States from 1982 to 2012. I examine sprawl in two dimensions: horizontally and vertically. To measure the horizontal aspect, I use the USDA National Resource Inventory data to calculate the percentage of a county that is considered urban. In general, if small or very large percentages are found, that is an indication of more compact development. In the vertical dimension, I use population plus jobs density (population plus jobs divided by urban land). The idea for this is that urban or suburban areas exist for multiple uses. Some purely residential, some purely commercial, and others a mixed of the two. Only measuring one aspect gives a false sense of density, especially as it relates to public finance. Those office towers that are largely empty at night still require public services.

In general, I find that more compact development (think mixed-use medium rises) is less costly to provide public services; however, more dense development (think skyscraper offices and apartments) is more costly to provide public services. The relative size of the effects are not equivalent. More compact development has significantly more potential to reduce public spending than any associated increase in density could offset. In the average county area, if density increased from the 25th percentile to the 50th percentile, per capita expenditures would increase by $5.26. If the percentage of developed land was reduced from the 50th percentile to the 25th percentile in the average county, per capita expenditures would decline by $60.86. This finding suggests that if development patterns were to shift to more dense and compact development, there will be a reduction in public spending on average.

Moreover, some spending categories are more affected by development patterns than others. Education, police, fire, libraries, sewerage, and solid waste management would all see likely reductions in per capita expenditures if development was more compact. This shouldn’t be too surprising as all these services require traversing space or efficiently locating a building. In the case of education or libraries, it can be difficult to efficiently locate facilities when students or residents are spread out. For the others, spacing development far apart means needing more “stuff” to effectively provide public services; more police cars, fire trucks, miles os sewer lines, or garbage trucks.

My results suggest that more compact and dense development can pay dividends in lowering public expenditures. The key policy question is how to achieve that. Effectively designed impact fees that internalize the social costs of sprawl on developers (and are likely passed along to new homeowners) are one mechanism. However, our ability to do this effectively appears somewhat lacking. Statewide growth management or local urban containment policies may be a mechanism to reduce growth on the urban fringe and thereby reduce expenditures. Promoting infill development is another mechanism to stem growth on the urban fringe. All of this is to say that there are policy options to reduce sprawl and, to the extent those policies are successful, a secondary effect is a likely reduction in local public spending.