Despite their success in promoting social mobility for students from disadvantaged backgrounds, Historically Black Colleges and Universities (HBCUs) are often ranked lower than Predominantly White Institutions (PWIs). In new research Precious M. Hardy and Mara S. Aruguete controlled for students’ socioeconomic status – a factor which can have a large influence on success measures used to assess the quality of higher-education institutions, such as graduation salary and graduation rates. They find that after making these controls, Historically Black Colleges and Universities outperform Predominantly White Institutions on several measures, reinforcing the case for increased investment in HBCUs.

Historically Black Colleges and Universities (HBCUs) were established to provide education for Black Americans following the abolition of slavery and during the years of legal segregation. Our research on HBCUs shows that these institutions still hold true to their mission of providing access and education to some of the most financially and socially disadvantaged students in the US. Moreover, HBCUs are succeeding at promoting social mobility in their students.

On average, HBCUs serve a greater proportion of low income and less academically prepared students than Predominantly White Institutions (PWIs), yet are more successful at promoting social mobility (when an individual or family’s social status shifts, often through higher incomes). Research has shown that HBCUs alone have graduated most of America’s Black middle class, in addition to most Black science, technology, engineering, and math (STEM) professionals. Support systems at these institutions have been shown to enhance students’ sense of self and facilitate their ability to navigate issues related to race and culture. However, HBCUs are often labeled academically inferior to PWIs by college ranking systems.

Traditional college ranking calculations tend not to account for the effects of different student populations at HBCUs and PWIs. Traditional measures used to assess the quality of educational institutions include graduation rate, salary of graduates, and first-year retention, among other things. For instance, a great deal of research has shown socioeconomic status (SES) as a major predictor of educational outcomes (e.g., test scores and graduation). Students from low-income families tend to live in communities with schools that lack resources, funding, rigorous programs (e.g., Advanced Placement courses), and are more likely to have unqualified teachers. Low-income students are also more likely to work longer hours during college, drop out, or retain a substantial amount of student loan debt post-graduation. If HBCUs serve low-income populations, they are likely to have lower success rates even if they are quite effective. Therefore, comparing HBCUs to PWIs is like comparing “apples to oranges” because they serve dissimilar populations. Given the mission of HBCUs and the unaccounted-for effects of low-SES, traditional measures will inevitably create an inaccurate picture of institutional quality.

Our research compared student outcomes in Historically Black Colleges and Universities and Predominantly White Institutions while statistically controlling for socioeconomic status (SES). This means we removed the influence of SES, as if both types of institutions served socioeconomically similar students. This approach allowed for a more appropriate comparison: “apples to apples.” Once the effects of SES were controlled, HBCUs outperformed PWIs on first-year retention and salary of graduates while showing no differences in graduate rates between the two institutions. This suggests that there are biases in the traditional mechanisms used to rank colleges and universities. These flawed assessments create flawed results that are detrimental to the sustainability of HBCUs. 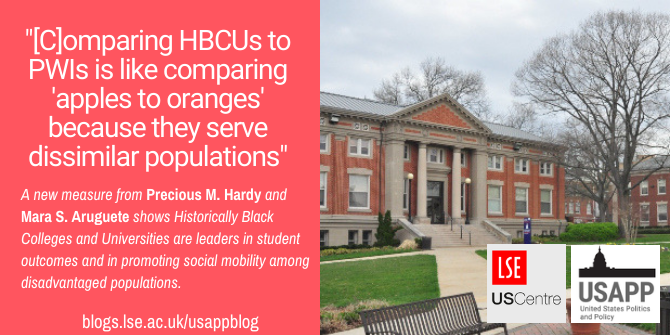 “Howard University” by Emil Mondoa is licensed under CC BY NC SA 2.0

Disparities in populations served are rarely considered in college ranking publications such as U.S. News and World Reports’ Best College Rankings. Without this insight, consumers are left with the impression that HBCUs suffer in comparison to PWIs. Fortunately, in 2014, the CollegeNet’s Social Mobility Index (SMI) was developed. The SMI takes into account the degree to which a college or university serves economically disadvantaged students. It examines graduation rates and early career salaries while considering SES. Our research showed that HBCUs emerged as more favorable than PWIs on the SMI but less favorable than PWIs on U.S News and World Reports ranks. These results show that HBCUs continue to be quite effective at increasing social mobility in disadvantaged students.

HBCUs are serving as engines of social mobility for less academically prepared and financially disadvantaged students despite all the challenges they face. Their administrations should strive to make evidenced-based arguments for this accomplishment. Given that the US has shown a decrease in intergenerational mobility since 1980, institutions that successfully support social mobility should be commended, not punished. HBCU representatives would benefit by communicating their success in social mobility indicators to consumers and lawmakers as opposed to traditional college ranking measures, since traditional college rankings favor wealthy students and wealthy institutions.

Our research provides a strong case for presenting HBCUs as engines of upward social mobility. The data also make a strong case for increased investment in HBCUs. If federal and state governments wish to maximize their investments, they should desire to invest in institutions with the greatest potential for making an impact on the lives of students. HBCUs can boast an excellent track record in providing the social mobility that forms the basis of the American dream.