Donald Trump, self-styled “stable genius,” has outdone other US presidents in one respect, Ron Pruessen suggests. He has taken the sometimes valuable, sometimes problematic egotism routinely endemic to White House occupants and pathologized it into profoundly costly and dangerous narcissism.

It’s hard to avoid encountering the word “narcissist” in discussions of Donald Trump. One recent prompt: the president’s tweet about using his “great and unmatched wisdom” to unleash Turkey on the Kurds of northern Syria. For many, he has become the very model of a modern egomaniac. (What Gilbert & Sullivan might have done with him! You can just imagine Stephen Colbert rattling off the patter.)

As I have stated strongly before, and just to reiterate, if Turkey does anything that I, in my great and unmatched wisdom, consider to be off limits, I will totally destroy and obliterate the Economy of Turkey (I’ve done before!). They must, with Europe and others, watch over…

Is this, however, one of the many instances where the 45th president is more rooted in American history and more reflective of presidential precedents than might seem to be the case?

Yes, in the sense that egos – Falstaffian egos – have hardly been scarce among Trump’s predecessors. Shrinking violets, after all, are not prone to be attracted to the political arena. Nor would battling to the top ranks of the arena be likely without intense self-confidence: the kind that would accept necessary sacrifices of time, energy and family; the kind that would make it easier (or at least possible) to persuade others to play follow the leader in a campaign or years in office. Dynamic or even turbo-charged self-assurance is simply a necessary part of a presidential skill set.

Results have been varied, to be sure, and the impact of ego has been relevant to assessments both glowing and disdainful.

On one hand: George Washington’s mastery of battlefields and politics was enabled by a combination of intellectual capacity, a cool ability to learn from experience, and confidence in his own judgments. His personal letters reveal a strong desire for “approbation” – his word – and his sense of having earned that which his achievements brought him. As an enthusiastic theater goer, Washington also likely felt some affinity for heroic figures treading stages both intimate and grand.

Abraham Lincoln, so different in his humorous self-deprecation, his apparent frontier roughness, and his hovering despondency – but to miss the steel of his self-assuredness would repeat the mistakes made by many of his contemporaries. From the “little giant” of Illinois Senator Stephen Douglas to experienced generals and sometimes pompous Cabinet members, rivals and colleagues were forced to come to terms with the flinty core beneath the deceptive exterior. Witness the long life of the perhaps apocryphal story of Lincoln’s summation of a White House debate: “Seven no and one aye, the ayes have it.”

Franklin Delano Roosevelt became a distinctive 20th century exemplar. Inheritor of a notable surname which he shared with the 26th president, economic comfort, and social status, he found the core personal strength that gave a real measure of triumph over the polio that struck at age 39. After that, he projected an aura that made meeting grave challenges seem possible – seem sometimes even easy, even fun. Millions were drawn to the smile, the jaunty air, the sense of humor, all supported by the striking self-confidence as routinely out of sight as the weighty leg braces that helped him stand.

And Barack Obama in the 21st century? As different from FDR as Lincoln was from Washington, the lineage of powerful ego is nonetheless clearer than any DNA mapping (or birth certificate) would reveal. To challenge Hillary Clinton and then John McCain in 2008 – as the junior senator from Illinois and an African-American – testified by itself to high self-esteem. There have been qualms even among admirers, regarding the sometime professorial/Mr. Spock aloofness and specific decisions (on deportations, drones, delayed leadership on gay marriage, among others). Yet respect remains high for the calm, graceful, eloquent, forward-looking, and good-humored style (and substance) that found a foundation in that powerful self-regard.

On the other hand: Even those greatly admired could allow ego to put them and the country at risk. Washington was sometimes tempted by the urgings of advisers aspiring to an American version of aristocracy, inching toward royal trappings like presidential levees and courtly ceremonies. Roosevelt allowed a sense of personal exceptionalism to translate into his 1944 candidacy (even knowing his health was fragile) – while simultaneously continuing a decision-making style that left key advisers at arm’s length or uninformed.

Other Trump predecessors demonstrate how self-esteem could move further beyond the occasional tarnish that inevitably marks human achievements – complicating or compromising personal as well as national reputations. 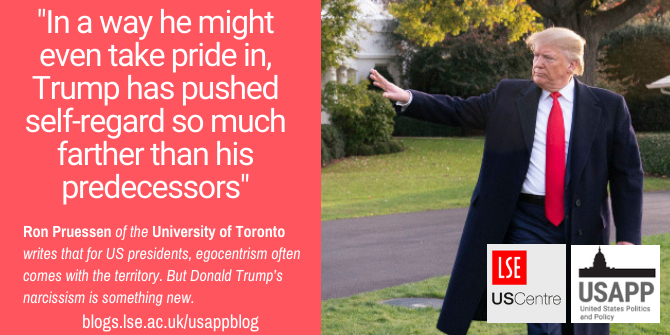 “President Trump Departs for KY” by The White House is Public Domain.

Woodrow Wilson deserves ongoing admiration for many reasons: “progressive” reforms like the creation of the Federal Reserve System – or still stirring eloquence about building a more peaceful world order after the Great War’s horrendous devastation. This president’s pride, though, also brought more problematic consequences. In law school, he declared “my end is a commanding influence in the councils (and counsels) of my country,” signaling the tenor of regular episodes in his career. Mexico, Haiti and others felt the impact of his arrogance (and American-style imperialism) in his White House years, with military force being used to “teach the South American republics to elect good men!” His belief in divine authorization – that the “sword” he wielded “carried the light of heaven upon its blade” – then scarred the end of his life, as well, when he was unable to accept a workable compromise with those who questioned aspects of the Treaty of Versailles and the League of Nations.

Richard Nixon also self-damaged what could have been a more honored place in history – allowing a sometimes out of control ego to hack away at personal and national achievements. The breakthrough with China, fostering détente with Moscow, ending the war in Vietnam: important, if complex successes. Marring the record, however, Nixon bounced from Olympian self-regard to paranoia about any lack of cheering. He referred to himself in the third person in regular instructions about public relations messaging, as in injunctions to emphasize how “Nixon the man” was “At his best in a crisis. Cool. Unflappable.” He hated the adulation heaped on John F. Kennedy and wanted his own “mythology”: “Courage, boldness, guts? Goddam it! That is the thing.” After de Gaulle’s death, Nixon wanted billing as “the world leader.” It was the kind of self-image that helped spawn the brutally drawn-out end to conflict with Hanoi, by way of a desperate determination to avoid anything that would appear as weakness or loss – and obliterating the “honor” that might have come with making peace. Nor is Nixonian ego/paranoia absent in the authorization of the Watergate break-in (maneuvering against a much weaker opponent) or the intense cover-up prompted by the presumption of being able to get away with it.

Others too, of course. Among them: Bill Clinton, brilliant in so many ways, but convinced that his private peccadillos could remain private. George W. Bush persuaded that he was in the White House “for a reason” and that war against Iraq had divine sanction. He remained stubborn to the end, as well, angered by the theme of many critics: “Afghanistan is good. Iraq is bad. Bullshit.”

Given all this ego in the annals of the presidency – and forty-five White House occupants provide more variations on the few examples offered here – does Donald Trump offer just the latest, perhaps somewhat more flamboyant demonstration? No. In a way he might even take pride in, Trump has pushed self-regard so much farther than his predecessors that a different conclusion is required. While I am not a psychiatrist, it is revealing to turn to the “pathological personality traits” associated with narcissism in the American Psychiatric Association’s Diagnostic and Statistical Manual of Mental Disorders. Extreme “grandiosity,” “exaggerated self-appraisal,” “sense of self-entitlement,” “predominance of a need for personal gain,” etc.: sound familiar? “I would give myself an A+,” Trump contends, regularly elaborating that he has “accomplished more than any president” (even with respect to inauguration crowd size). From his “perfect” conversation with Ukraine’s President Zelensky (who else would use such an adjective in such a context?) to the 13,000 wilder taunts and tales of his tweets to the stand-up strutting of countless rallies allowing therapeutic transfusions of adulation: this is a man who constantly demonstrates what Thomas Carlyle called the “demonic” power of pride, “the sixth insatiable sense.”

Narcissism, however, has not yet become an impeachable offense (any more than “the madness of King George” ended his reign). Perhaps Americans (and the world) will find the current Ukraine quid pro quo scandal enough grounds to terminate this presidency. Trump’s crude threat and the coverup attempts that followed are certainly bad enough in themselves – revealing the Godfather-ish style and dishonesty that poisons Trump’s approach to almost anything. His narcissism has a comparable permeability – most fundamentally, because it allows (requires?) a desperate, self-adoring, self-serving search for acquiescence to profoundly distort capacity for realistic analysis and careful decision-making. If Trump survives – aided by the bewildering tolerance of the Republican leadership – he will go on standing in the way of the country’s (and the world’s) ability to meet already severe 21st century challenges.