For decades in the US, which schools kids are assigned to go to has been based on where they live. Because of this tight link between where a child lives and attends school, the most advantaged neighborhoods often had the highest-resourced schools while the least advantaged neighborhoods had lower-resourced schools. This reciprocal relationship meant that segregated neighborhoods were often served by segregated schools. Since the 1990s, however, this close link between neighborhoods and traditional public schools in the US weakened as school choice, which severs the link between residential and schooling decisions, expanded. Charter schools (a kind of public school which is more autonomous from state and local regulations), in particular, during this period expanded substantially in both the number of schools and students they enrolled. In 2016, nearly 3 in 10 students attended a school that was not the assigned neighborhood school, and that proportion was much higher in urban areas.

Over the last two decades as school choice has expanded, neighborhoods across the US have also been changing as gentrification (and socioeconomic ascent, more broadly) has brought white and households with higher socioeconomic status into relatively more diverse city centers. These trends intersect in key ways. School choice means that choosing a neighborhood no longer means families are locked in to certain schools, perhaps facilitating moves to more diverse neighborhoods when there are non-local options available. Enrollment of children in more diverse local schools may not follow, however, since past work finds that white families tend to avoid schools with higher nonwhite or lower-income students, sometimes fleeing to magnet, charter, and private schools. Therefore, the in-migration of families into racially and socioeconomically diverse urban neighborhoods may not produce integrated schools if families choose alternatives other than their assigned neighborhood schools.

To answer these questions, I constructed a unique dataset of the largest, more diverse school districts in the US. I first calculated the difference between the proportion of non-Hispanic white elementary-age students residing in the neighborhood and local school—what I called the “Neighborhood-School Gap” (NS Gap). Positive numbers for this measure (scaled -100 to 100) indicate that there are proportionally more white students living in the neighborhood than attending their neighborhood school. Then, in a series of analyses, I observed whether and where the NS Gap changed from 2000 to 2010, and which factors were associated with those changes.

Looking at the data shown in Figure 1, we see that the average neighborhood-school Gap increased from 2000 to 2010, albeit modestly (from about 3.2 to 4.2 percentage points). This overall average, however, masks a great deal of variation between different types of neighborhoods. 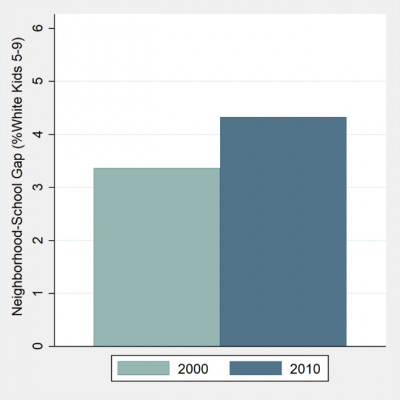 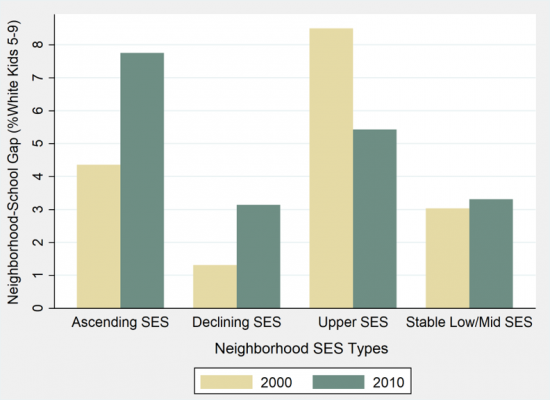 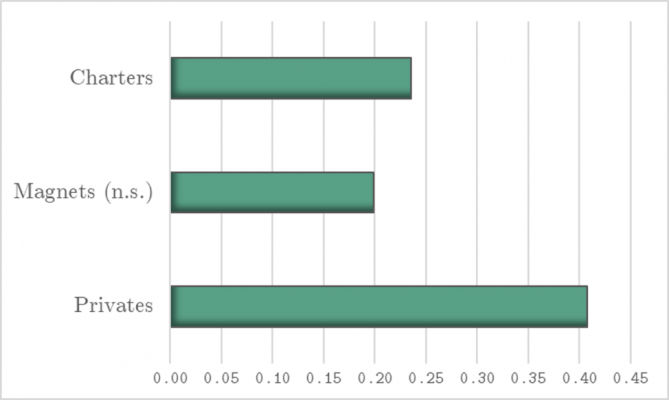 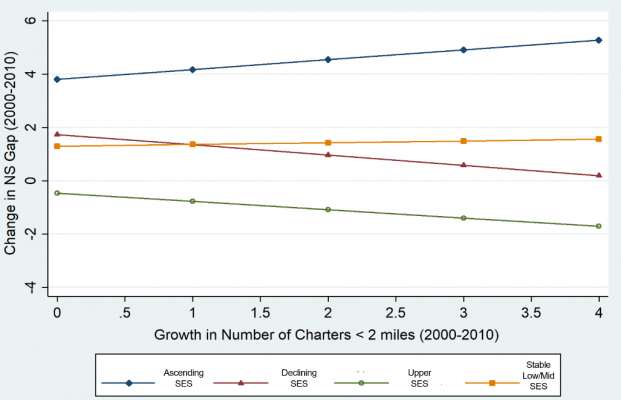 Overall, I found growing mismatches between neighborhood and school racial/ethnic composition over time— neighborhoods were increasingly composed of more white students than the local school. The compositional mismatch grew the most in neighborhoods experiencing demographic change and socioeconomic ascent, particularly when there were growing nearby alternatives (e.g., charter schools). This suggests that white parents were bypassing the local school while the neighborhood was still changing. The demographic diversity produced via ascent and gentrification at the neighborhood level, therefore, still resulted in stratified educational experiences among kids.

The results of my study have implications for theories of neighborhood and school stratification and raises new questions about how residential and school sorting upholds existing racial hierarchies in a changing educational marketplace and an era of shifting metro migration patterns. These findings also have implications for housing, urban, education, and economic development policies, and add nuance to the idea that school policy is housing policy, and vice versa.

Jennifer Candipan – Harvard University
Jennifer Candipan is a Postdoctoral Research Fellow in the Department of Sociology at Harvard University and a Postdoctoral Research Affiliate at the Harvard Joint Center for Housing Studies. Jennifer’s research interests are in stratification, urban sociology, race/ethnicity, and the sociology of education, with specific interests in how social and spatial contexts like neighborhoods and schools produce racial/ethnic and economic inequalities.