In recent years, local newspapers in the US have seen closures and significant declines in staffing. In new research, Meghan Rubado and Jay Jennings find that the decline of local news may be having a knock-on effect on local democracy. Areas which have more severe cutbacks in newspaper staff, they write, also see reduced political competition and voter engagement, and a greater risk of corruption going unchecked.

Residents of American cities and towns have long looked to local newspapers for reliable information on the activities and electoral politics of their local governments. In the past decade though, newsrooms have slashed their staffing levels, and many newspapers folded altogether. As city newspapers shrank, it appears there were serious consequences for local democracy. Our research suggests that staffing cuts at newspapers depressed competition in mayoral races and may have led to a dip in voter turnout in these races, as well.

As the best (and often the only) providers of regular and in-depth reporting on local government happenings, newspapers allowed for at least some local voters to know what their elected representatives and other public officials were up to. But as newsrooms cut staff, editors consolidated the work of their reporters, requiring them to cover more topics or “beats” rather than focus intensely on, say, City Hall for the central city or a handful of suburban cities. Many newspapers simply quit covering some suburban and exurban cities and towns and instead focused only on the central city and the most populous suburbs.

With far fewer reporters and a need to drive online traffic with stories that generate clicks, newspapers have done less of the traditional watchdog, policy process coverage that provides important information to voters. With reduced local policy and politics information available to interested voters, we theorized that fewer high-quality challengers would emerge to unseat local elected officials. And with fewer voters aware of local elections, the candidates, and the stakes of the elections, we also expected a related decline in voter engagement and turnout.

Previous research and journalistic accounts suggested that newsroom staffing levels had dropped quite dramatically, but we obtained survey data from the American Society of News Editors to see the magnitude of the decline. As Figure 1 shows, the data revealed a plunge in average newsroom staffing starting around 2007 with no rebound after a bottoming-out occurred around 2013. 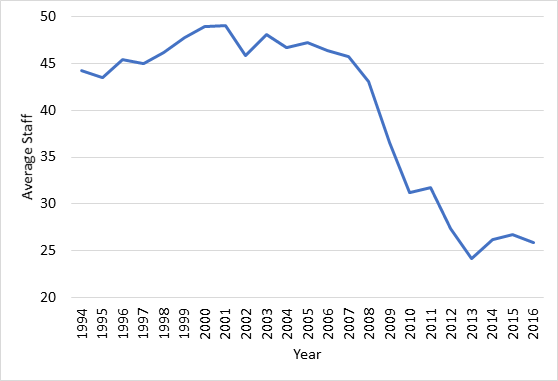 To see whether these cuts affected local politics, we isolated staffing data for 11 newspapers in small- to mid-size cities in California and connected these newspapers to all of the local governments within their coverage area. We then gathered data on mayoral elections in these communities for the period 1994 to 2014. We ended up with 46 cities and 246 mayoral races in our study.

We then examined how newsroom staffing levels in a given year related to mayoral races in the following year. We looked at the number of candidates in the races, the victory margins of the winning candidates, the occurrences of unchallenged incumbent mayors, and voter turnout. 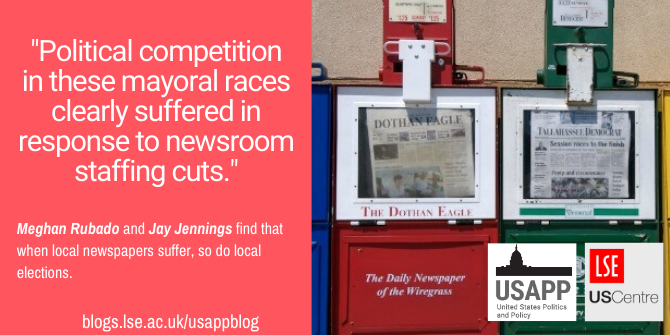 “Florida Road Trip “ by THOR is licensed under CC-BY-2.0

Political competition in these mayoral races clearly suffered in response to newsroom staffing cuts. When declines in staffing were more severe, fewer people ran for mayor, victory margins of the winners were larger, and unchallenged incumbent mayors were more likely. The results also showed suggestive evidence that voter turnout had dropped in response to newsroom cuts.

So, as newspapers shrank to stay afloat under intense financial pressures, local governments saw reduced political competition and, likely, declining voter engagement. But we believe the consequences extend beyond these. For example, with less public awareness of local government affairs and less threat of a challenger in the next election, an elected official may be increasingly tempted to cut corners in their duties to local taxpayers, or even to engage in graft or outright corruption. With no reporter in the room to call out bad behavior by public officials, we expect that bad behavior is more likely to occur.

While American voters have grown increasingly wary of federal government over the period of our study, and also show decreasing confidence in state government, their confidence in local government has remained steady and at higher overall levels than for state government, polling data show. Alongside evidence of steady and strong trust in local government, the ripening of conditions ideal for corruption and poor management by local elected officials is especially troubling. Local officials seem to be enjoying the joint benefits of low levels of public scrutiny and high levels of public confidence.

While we were not able to directly assess changes in the levels of local news coverage of politics and policy in our original study, we have since expanded our research by interviewing reporters, assigning editors, and top editors at most of the California newspapers in the project. Reporters and editors described how their jobs have changed with shrinking newsrooms and a continuing shift to online content delivery.

The journalists described feeling stretched to cover a wider array of topics with fewer resources. Most said there was no doubt that attention to daily happenings in local government had dropped off in some communities and disappeared in others. “[I]t always feels like we are behind—like we can’t get to everything,” one local government reporter said. And they largely agreed the decline in the coverage of the policy process, or “turn of the screw” stories, would have effects on local government and the voting public. With reduced information about local officials, people have less reason to pay attention to elections, to vote, or to mount a challenge against a disappointing incumbent. The full report on our interviews with these journalists, which was supported by the Knight Foundation, is available through the University of Texas at Austin’s Annette Strauss Institute for Civic Life.

Meghan Rubado – Cleveland State University
Meghan Rubado is Assistant Professor of Urban Studies in the Levin College of Urban Affairs, Cleveland State University. She specializes in the study of state and local politics in the United States, environmental policy, and the politics of urban service provision. Other recent research focuses on inter-local collaboration and conflict in the context of sustained regional decline.

Jay Jennings – University of Texas at Austin
Jay Jennings is a Postdoctoral Fellow at the Center for Media Engagement at the University of Texas at Austin. He studies the media’s role in how citizens engage in politics and his work draws on the fields of political communication, public opinion, and political psychology. His research has been published in Political Communication, Political Research Quarterly, Public Administration Review, and American Behavioral Scientist.