The past 40 years have seen a huge increase in income inequality in America, with the top 1 percent of earners seeing large increases in their share of all incomes. David Macdonald writes that while most Americans appear to be opposed to high levels of inequality, low levels of trust in government may be dampening their desire for measures to redistribute incomes.

As numerous economists have documented, economic inequality is rising in the United States, and has been for decades. By some measures, the top 1 percent of Americans hold as large a share of national income as they did prior to the Great Depression. This has been echoed by prominent politicians such as Senators Bernie Sanders and Elizabeth Warren and is likely to be a central issue in the 2020 presidential election. Despite this, ordinary Americans, across the income spectrum, have not become more supportive of economic redistribution. This is surprising, given that most Americans claim to be aware that inequality has been rising over the past several decades, as Figure 1 shows. It is also surprising because most (including a sizeable number of Republicans) also claim to be opposed to high levels of income inequality.

Note: Trust in government reflects the percentage of Americans who said they trusted the government to do the right thing “always” or “most of the time.” Income inequality shows the pre-tax income share held by the top 1 percent of Americans. Years range from 1958 to 2015, with a few missing for trust in government depending on the availability of poll questions.

In recent research, which is a part of my doctoral dissertation, I seek to examine why this is the case. Specifically, why American support for economic redistribution has not meaningfully increased, despite decades of high, and rising income inequality. I argue that we can better understand the puzzling relationship between Americans’ attitudes toward inequality and their attitudes toward government redistribution by considering another trend that has occurred over the past several decades—the decline of trust in government. 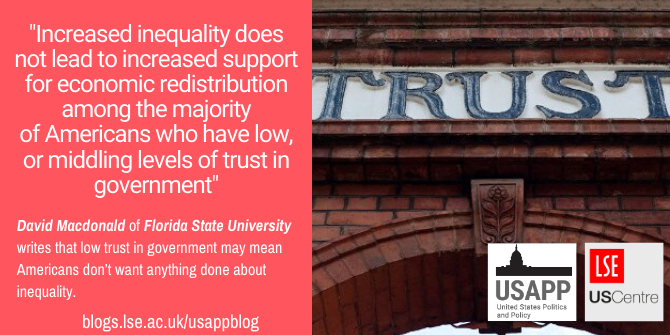 “Trust” by Lars Plougmann is licensed under CC BY SA 2.0 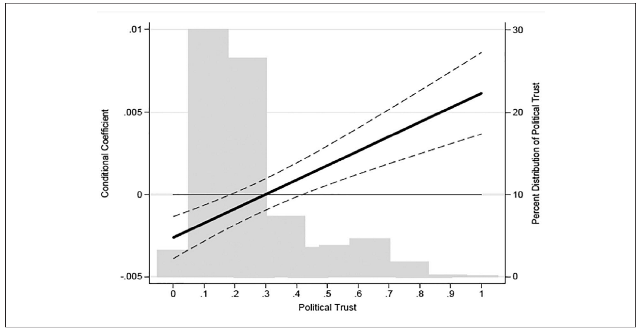 To test this, I combine data on state-level income inequality with individual-level survey data from 1984-2016. Income inequality is an objective measure at the state level, based on tax return data from the Internal Revenue Service (IRS). The states are an ideal geographic area to look at for two reasons. One is that people have a better sense of how economically unequal their states are than how unequal the nation is. Second, there is a lot of variation in income inequality across the states, while there is minimal, over-time variation at the national level. Trust in government and support for economic redistribution are based on survey questions included on the American National Election Studies (ANES), a long-running survey of public opinion and voting behavior in the United States. Both survey measures are coded so that higher values indicate higher trust in government and greater support for economic redistribution, respectively. I also account for a battery of state and individual controls to increase the robustness of my statistical results.

Overall, my work shows that low, and declining trust in government can also help us to better understand why an American mass public that claims to be aware of, and oppose to high levels of income inequality, has not turned more strongly in favor of economic redistribution. Trust in government is certainly not the only factor that influences peoples’ support for redistribution, but it is an important one.

Low trust in government seems likely to continue into the near future. This does not bode well for economic redistribution, even as income inequality continues to rise sharply. If citizens are not responding to rising income inequality, by demanding that government “do more,” i.e., increase social welfare spending, and/or provide more citizens with health insurance, then politicians will have little incentive to enact these policies.