In Silent Cells: The Secret Drugging of Captive America, Anthony Ryan Hatch explores the use of psychotropic drugs as part of the US carceral state, focusing not only on jails and prisons, but also foster homes, immigrant detention centres, nursing homes and the military. This is a taut and nimble study, writes Alessandro Ford, that allows the silence around this issue to speak volumes. 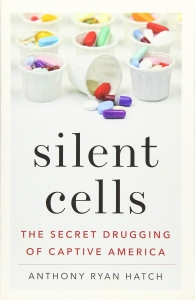 The story of mass incarceration in the US has already been told. Journalists, activists, lawyers, politicians, academics: the clarion call for drastic change to American justice and penal systems has sounded clear and loud. Yet among this babel of voices, a pocket of silence has lingered. Namely, how psychotropic drugs – antidepressants, antipsychotics, tranquilisers and sedatives – have been weaponised for decades by the US carceral state to suppress the cries of those trapped in its grasp. ‘Technocorrections’ is the name given to this policy of strategically applying new technologies in the effort to reduce the costs of mass incarceration and minimise the risks that prisoners pose to society. Or, as one group of prisoners referred to it in their 1980 letter to Congress, ‘technototalitarianism’.

However, the US carceral state reaches beyond just jails and prisons. It invades foster homes, immigrant detention centres, nursing homes and the military. Each of these ‘total institutions’ – highly bureaucratic, all-embracing and cut-off from so-called ‘free society’, as they are – have become increasingly reliant on psychotropics to manage, pacify and control the people living within them. Agitated children, ‘uncooperative’ foreign nationals held in privately-run immigrant detention facilities, depressed and plaintive elders in for-profit nursing homes and soldiers facing repeated deployment with little dwell time: they have all been guinea pigs in a giant (un)scientific experiment to see just how docile and cheap human lives can be made. And what of ‘free society’ itself? In a country where 16.7 per cent (one in six) adult Americans take at least one psychopharmaceutical regularly (with 80 per cent of those doing so on a long-term basis), freedom must be, if not redefined, then at least reappraised.

Yes, a pocket of silence may have lingered within the scholarship on US mass incarceration, but Anthony Ryan Hatch’s masterful Silent Cells: The Secret Drugging of Captive America makes that silence speak volumes.

As the author acknowledges, the book faces a key methodological problem. Namely, that when your topic is the extra-medical drugging of captive populations for purposes of social and political control, not many people invite you in for an interview. Furthermore, there’s a surprising (or perhaps unsurprising) lack of publicly available data on psychotropic use in the institutions Hatch is studying, which, he notes, are paid for by tax-payer dollars.

That said, Silent Cells does not want for statistics. One federal census of state prisons in 2000 puts the number of them distributing psychotropic drugs to their prisoners at 73 per cent. It is the ‘most common form of mental health treatment’. These prescriptions, Hatch writes, derive from several reasons, ‘some of which are related to the treatment of psychosocial symptoms and psychiatric disorders and some of which are linked to the need to maintain order’. Furthermore, the institutional use of psychotropics in prisons is positively related to increasing levels of confinement: ‘in 2000, 95 percent of maximum/high-security state prisons distributed psychotropics, compared to 88 percent of medium-security prisons and 62 percent of minimum/low-security prisons’.

This need to maintain order, to pacify unruly minds and bodies, extends to the old and the young. ‘Somewhere between 15 percent and 70 percent of children in foster care are drugged’, Hatch writes, ‘and prescriptions for individuals in this population have been increasing over time across the United States. Indeed, evidence from statewide samples of fostered youth shows that anywhere from thirteen percent to 41 percent are prescribed more than one psychotropic at the same time.’ As for the other extreme, we are living through an ‘elder zombie apocalypse’, Hatch writes. According to a 2018 landmark Human Rights Watch report on nursing homes in the US, between 25 per cent and 50 per cent of nursing home residents are given psychotropic drugs, at a time when ‘nearly three out of every four [nursing homes] are operated by for-profit companies’. Many elders hold the all-too-real fear of pharmaceutical zombification, being given antipsychotics they don’t need for diagnoses they don’t have.

But it is not just the infirm who suffer from rampant overprescribing, but the fittest too: the military. From 2005 to 2011, there was ‘a 76 percent increase in all the psychotropics prescribed to active-duty troops: orders for antipsychotics increased by 200 percent [and] antianxiety drugs by 170 percent’. Furthermore, a 2010 report from the Defense Department’s Pharmacoeconomic Center reported that around 20 per cent of the 1.1 million active-duty troops surveyed were taking some type of psychotropic drug – be they ‘antidepressants, antipsychotics, sedative hypnotics or other controlled substances’. With long tours of duty, worsening mental health and endless conflicts, military officials have increasingly turned to psychotropics to ‘conserve fighting strength’ in combat zones.

If this taut and nimble book has a fault, it is that it cannot tell us the hidden statistics. The ones that would illuminate the degree to which such institutions are simply being overzealous and irresponsible in their application of a cheap technology to manage a legitimate nationwide mental health crisis versus the degree to which psychotropics function as ‘chemical straitjackets’ to muzzle and subjugate social undesirables and commit what legal scholar Patricia Williams has called ‘spirit murder’. The answer, Hatch notes, depends largely on your conceptual framework. Traditionally, psychotropics have been perceived through the Foucauldian lens of ‘biopower’: the monitoring and regulation of human populations ‘on the basis of [their] biological processes’. Biopower involves ‘the production of biomedical knowledge about the health of organisms and the use of that knowledge to create social structures (e.g. public health agencies and health laws)’. Under this lens, the rampant use of psychotropics within the carceral state is indeed about social control, but mostly through the paternalistic boosting of people’s health (i.e. healthier, happier prisoners/troops/young/elderly mean higher profits and more compliant subjects).

Hatch, however, applies a different framework: namely, social theorist Achille Mbembe’s notion of ‘necropower’. In this schema, ‘governments target particular human social groups for death, […] herd them into isolated territories with no viable social infrastructure, and use overwhelming technological force to kill them’. Necropower creates what Mbembe calls ‘death worlds’: a form of social existence in which vast populations are subjected to conditions of life conferring upon them the status of the living dead. Psychotropics in prisons are certainly about power, Hatch argues, but not in the way Foucault would have imagined. They are weapons aimed at producing ‘mass psychic death’. Necropower also holds greater explanatory potential regarding the lacuna of data that is the book’s main obstacle. For if the production of scientific knowledge shapes the biopower of a society, it is the production of ‘epistemic silence, or willful ignorance’ that shapes its necropower. Silence, Hatch reminds us, remains the key to subordination and silencing groups as both a direct means of achieving oppression and suppressing opposition to that oppression.

The book concludes with the compelling assertion that just as individuals can become addicted to drugs, so too can institutions. Certain psychologists have long held that addiction is a symptom of a sick society and in an era of late-stage capitalism, opioid epidemics and ongoing structural violence against the bodies of the poor, women and people of colour, the secret drugging of captive America is a symptom of a much deeper malady.