From Brexiters citing Ancient Greek legend to Donald Trump rewriting the details of the Normandy landings, Philip Seargeant writes that contemporary politicians are constantly co-opting history for their own ends. Though they pay lip service to the idea of learning from the past, he argues that these populist leaders have little real interest in engaging with the complexities of the challenges their societies face.

Following his 2018 Singapore summit with North Korean Leader Kim Jong-un, President Trump declared that ‘The past does not have to define the future… [A]s history has proven over and over again, adversaries can indeed become friends’. This is a standard mantra for law-makers and leaders: we analyse the past in order to help us navigate the future. But coming from Donald Trump it has a jarring feel. This is the man, after all, who expressed astonishment that Lincoln had been a Republican, and who blamed the Canadians for burning down the White House in 1812. He’s clearly not the most diligent student of history – a fact that, for some people, has worrying implications for his ability to competently carry out his job.

But while Trump may have a very poor grasp of the details of his country’s past, he’s happy nonetheless to cite history when he thinks it will help him make a political point. And in this, he joins a trend among politicians of repurposing the past as a tool for persuasion.

From referencing history to co-opting it

It’s by no means a new phenomenon for politicians to reference history as a way of branding themselves, of justifying their policies, or of making rhetorical points. It’s a standard argumentative strategy, and part of a wider tactic of using narrative to persuade in politics. But what we’re seeing in this era of populist politics is that, often, these references are either hugely simplified or grossly distorted versions of the past. Whereas looking to history as a way of discerning patterns in the present involves careful and contextual study, co-opting history for rhetorical purposes increasingly means perverting and misrepresenting it to fit with your modern-day agenda.

This has been happening on both sides of the Atlantic recently, and often in almost identical ways. Over the past three and a half years, for example, Brexit has thrown up more than its fair share of wildly exaggerated historical comparisons. There’s been Moses ordering the Pharaoh to let his people go, and King John bowing down before Philip II at Le Goulet. Then there’s the small but rowdy cohort of hard-line Brexiters in the UK Parliament’s European Research Group who, during Theresa May’s premiership, took to describing themselves as the ‘Spartan phalanx’.

The allusion here is to the myth of the heroic stand that a small band of Spartan warriors made against the invading Persian army at the Battle of Thermopylae in the fifth century BC. Or maybe it’s to the action film 300 that was based on this history. Either way, the name has somehow taken hold, with the Daily Mail going so far as to mock up an image of the MPs Anne Marie Trevelyan, Steve Baker and Mark Francois standing heroically between Doric columns, all muscular torsos, thrusting spears, and a fetish for leather armour. The imagery also seems to have caught on with some of their followers. During a rally in Westminster on the first ‘no Brexit day’ in March 2019, a few members of the crowd donned ancient Greek helmets. And even after Boris Johnson’s emphatic win in December’s general election with his ‘Get Brexit Done’ refrain, the nickname is still being cited in the media.

But in styling themselves in this way, Francois and friends are just the last in a lengthy line of politicians who’ve had a fascination with the Spartan culture. The Greek historian Thucydides, whose History of the Peloponnesian War records the violent struggle between the city states of Sparta and Athens, has long been required reading for military historians and international-relations experts. Even some of the early members of Donald Trump’s administration were adherents. Both former Secretary of Defense Jim Mattis and former National Security Advisor H. R. McMaster have been known to quote Thucydides’s maxim that people always fight for the same basic reasons: fear, honour and self-interest. Then there was former Trump advisor and chair of Breitbart news, Steve Bannon, who was apparently so obsessed with this chapter in history that his computer password used to simply be ‘Sparta’.

Appropriating history while changing its meaning

These examples of what’s known as Laconophilia – an adulation of the historical culture of Sparta (the word comes from Laconia, the region of Greece which has Sparta as its capital) – follow in a long tradition of appropriation. From the Platonist philosophers though Machiavelli to the leaders of the English public-school system, ancient Sparta has been held up as a noble ideal for society: ascetic, heroic and eschewing financial corruption. But as the imagery has been appropriated, so its meaning has become imbued with the views of those doing the appropriating.

“#UNGA” by The White House is Public Domain.

One of the most notable Laconophiles was the nineteenth century German historian Karl Müller, who pioneered the modern study of Greek mythology. In praising the values of the Spartan society, Müller also introduced the divisive idea of racial purity into the myth. He did this by mixing beliefs about the racial superiority of the Dorians (the ethnic group of which the Spartans were a part), with the cult of ascetic Spartan culture. He went so far as to draw on a study of what was then the new science of comparative linguistics to show that the Dorians were a distinct cultural group, untainted by the influence of outside forces. It’s perhaps unsurprising then that a century later the Nazis were to pick up on this version of the myth, with Hitler himself describing Sparta as ‘the first völkisch [ethnonationalist] state’.

Throughout the twentieth century it tended to be the extreme right which favoured Spartan iconography. And this trend continues today in places such as modern Greece, where symbolism from this and other aspects of Ancient Greek culture are very much the preserve of arch conservatives. To what extent Steve Bannon or the Brexiters are aware of this recent history of appropriation is unclear. As Paraskevas Matalas, Assistant Professor of Contemporary History at the University of Crete, told me the chances are that for them Sparta simply symbolizes abstract ideas of ‘nationalism, isolation [and] resistance to globalization’. Their interest is unlikely to be in the details of fifth century BC conflict, but instead in the simplified myth of stubborn heroism.

‘Us’ vs ‘them’ politics for the 21st century

Another more recent cannibalising of history for rhetorical purposes is the use of World War II to explain some of Trump’s more controversial policies. For instance, following the withdrawal of US support for allied Kurdish fighters in Syria, Trump justified his actions by unexpectedly introducing the idea that the Kurds ‘didn’t help us in the Second World War, they didn’t help us with Normandy’. As a number of people have pointed out, there is in fact evidence that Kurds fought alongside the Allied forces at times during the war, albeit not on D-Day itself. But this sort of factual detail is irrelevant for the narrative that Trump is pushing, which transforms everything into a simplistic conflict between an ‘us’ and a ‘them’, which can then be mapped directly onto modern geopolitics.

Here again, Brexit almost precisely parallels US politics in its use of World War II rhetoric. Prompted by the contention that modern-day Germany dominates the EU, the narrative of Britain pluckily fighting for democracy and freedom as it did back in 1945 has been a favorite for pro-Brexit campaigners. Invariably this has shaded towards xenophobia at times, as in the example of the meme circulate by the Leave.EU campaign in October 2019 which declared ‘We didn’t win two world wars to be pushed around by a Kraut’. But even when the analogies are not so offensive, they still take a disconcertingly simple and romanticized view of what was one of the most painful episodes in European history.

One of the favourite refrains from populists is that the established political system is broken and needs to be radically reshaped. In keeping with this, populist leaders characterise themselves as innovators and mould-breakers. And despite lip-service to the idea that we need to weigh the lessons of the past in order to better shape the future, this determination to alter the system results in a highly cavalier approach to the reading of history. An approach which is content to plunder the past for persuasive myths, but seemingly has little interest in engaging with the sort of complexities which might inform us about the real challenges we’re facing today. 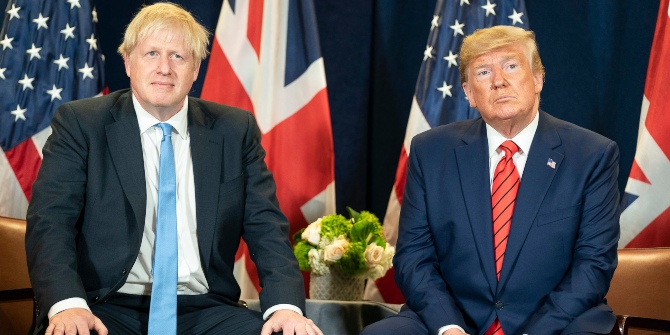