This week President Trump announced a ‘long awaited’ peace deal for Israel and Palestine. Julie Norman argues that the deal is not about peace at all and has in fact long been underway. She writes that the deal, which splits up Palestinian territories, has been largely presented to Palestinians as an ultimatum, and is largely a step backwards for the Middle East.

On Tuesday, US President Donald Trump released his ‘long-awaited’ peace deal for the Middle East. However, the plan he presented is not about peace, it’s not a deal, and it’s not long-awaited—it’s already happening.

First, Trump’s deal isn’t about peace, it’s about legitimising annexation and enabling a military occupation. Among the most contentious elements of the plan is the withdrawing of borders, annexing large settlement blocs and the Jordan Valley, totalling approximately 30 percent of the West Bank, into the state of Israel. (The Palestinian Liberation Organisation (PLO) claims this will leave Palestinians just 15 percent of ‘historic Palestine.’) Supporters of the deal may claim that such borders are necessary for Israel’s security; while Israel’s security should of course be taken seriously in any resolution, it will best be achieved alongside the realisation of Palestinian security and sovereignty.

The deal pays lip-service to a potential Palestinian state, but hardly a viable one. The remaining Palestinian territory, as shown in Appendix 1 of the plan, would consist of an ‘archipelago of Palestinian enclaves,’ not a contiguous state. Further, borders, airspace, and territorial waters would still be controlled by Israel, and the entire territory would be subject to Israeli ‘security responsibility,’ including the right to send in forces, while the Palestinian state would be de-militarised. Lacking the ‘conventional aspects of sovereignty,’ this so-called state would not look much different from the current occupied territories.

Further, ‘resolutions’ for key matters like Jerusalem and refugees, reflect either disregard or naiveté for the nuances of the issues. Regarding Jerusalem, the plan outlines a potential Palestinian capital in Al Quds, or ‘parts’ of East Jerusalem currently outside the separation barrier. However, the barrier extends far beyond the city, such that the territory identified for a capital consists of far-out suburbs. As for refugees, the plan explicitly denies any right of return; those who cannot integrate in host countries or go to the new ‘state’ of Palestine are channelled instead toward Organisation of Islamic Cooperation member countries, thus erroneously putting religious identity before national or homeland identity, and overlooking the Christian Palestinian minority. 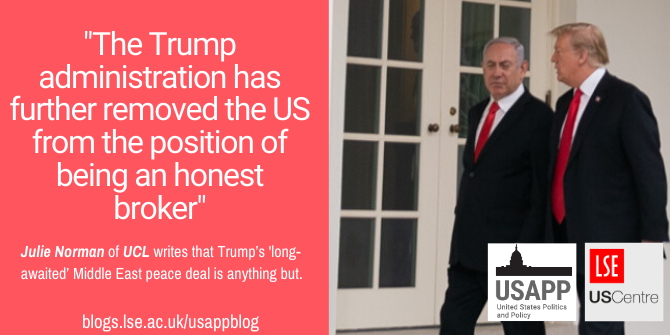 “President Trump Welcome the Prime Minister of Israel to the White House” by The White House is Public Domain.

Second, the plan isn’t a deal, which would suggest at least some consultation with Palestinian leaders and an attempt at symmetrical overtures. Instead, the plan was released only with Israeli review and endorsement, with Israeli Prime Minister Benjamin Netanyahu unveiling the plan with Trump at the White House. The administration has touted ‘Arab’ support for the deal, evidenced with representatives from Oman, Bahrain, and the UAE being present at Tuesday’s event, but Arab states should not be conflated with Palestinian representation (and even some ‘supportive’ Arab states expressed frustration with the lack of consultation prior to the plan’s rollout).

Further, the ‘deal’ has been presented to Palestinians as an ultimatum, with ‘tests’ that Palestinians must pass to achieve even the flawed statehood described above. This type of strong-arm ‘negotiation,’ which makes power asymmetries worse rather than better, has a history of failure in the Israeli-Palestinian conflict, including, crucially, at the failed Camp David II summit in 2000. Such tactics push Palestinians into a corner, and then allow the architects to score political points by blaming Palestinians for walking away from what they know is an impossible deal.

Critics may point out that the Palestinian Authority (PA) has been absent from the table because of their own opposition to Trump. But this opposition hasn’t occurred in a vacuum, and the administration has done nothing to try to re-engage the PA. Instead, Trump has enacted a series of policies that have only further alienated Palestinians, including moving the US embassy from Tel Aviv to Jerusalem, reversing US policy on illegal settlements, recognising Israel’s annexation of the Golan Heights, and slashing funding for Palestinian aid and refugees.

Finally, the ‘plan’ is not ‘long-awaited,’ rather, it has long been under way. While the occupation has been in place for over fifty years, the construction of the separation barrier and increased settlement expansion in recent years has been gradually squeezing Palestinian territory, enabling the annexation outlined in the plan. Indeed, Netanyahu indicated that he would bring the annexation plan to a vote as early as next week. The plan was released at a crucial time for the Israeli Prime Minister, who is facing charges of corruption heading into Israel’s 2 March election, and for Trump, embroiled in an ongoing impeachment trial.

There are no easy answers to the Israeli-Palestinian conflict, and it’s true that the Oslo-era peace process has long been obsolete. But Trump’s so-called ‘peace plan’ is a step backwards, not forwards. Rather then engaging with some of the still imperfect but original models emerging in recent years, the Trump administration has further removed the US from the position of being an honest broker, doubling down on Israel’s interests and weaponising peace for political gain.