Last week the United States Senate voted not to hear from further witnesses in the impeachment trial of Donald Trump, very likely paving the way for the president to be acquitted on all the US House’s impeachment charges. Christopher J. Putney writes on what politicians and pundits have been getting wrong about impeachment. The impeachment and Senate trial are not simply politics as usual, he writes, nor are they a standard legal process. They are, in fact, part of the US Constitution’s own corrective mechanisms.

Over recent months and weeks, we have seen a cacophony of responses to Donald Trump’s impeachment, and to the on-going Senate trial set to conclude this week. And though statements by senators, House managers, and the president’s counsel all suggest an almost certain acquittal, pundits and politicians have missed the deeper problem evidenced by the entire affair: how the abdication of institutional duty by Senate partisans accelerates constitutional decay. Seeing the depth of that problem requires rethinking the premises about constitutional politics generally––and the impeachment process specifically––taken for granted by lawmakers and commentators alike.

The first premise is that Trump’s impeachment and the Senate trial are twin manifestations of politics-as-usual––not an exceptional political episode anticipated by the Constitution’s architects. The second is that the impeachment process itself is chiefly a legal undertaking––akin to a normal criminal proceeding––instead of a distinctive constitutional mechanism with its own standards and logic. Both of those assumptions are wrong.

Their collective appeal among elites, however, is evidenced by the standard responses we see to the trial itself. Figures in both parties (including the president himself) have tended to characterize their opposition as bad-faith actors guilty of the sort of narrow partisan tactics that have come to characterize US politics since at least the Gingrich Congress. Republican politicians, including GOP Senators sitting for the trial, see the entire impeachment drama as one protracted––and lamentable––effort by Democrats to oust a duly elected president guilty of no wrong-doing in an election year. Democrats see impeachment as a grave––indeed, a last ditch––effort to thwart an increasingly unaccountable president bent on the continued abuse of his office. As some analysts have argued, with more evidence related to the trial surfacing almost daily, the latter view may be closer to reality. But the mutual disdain at the center of these competing narratives reveals their shared misconceptions about impeachment as the Constitution’s framers understood the concept.

Impeachment in the Founders’ constitutional design

In the framers’ view, presidential impeachments were thought to be the stuff of crisis politics––a rare form of constitutional process designed to contend with scenarios that were anything but politics-as-usual. Partisans, of course, might benefit from or seek to exploit such circumstances (as Madison and Hamilton each warned), but the core idea was that impeachment might sideline the reliably narrow interests of politicians, and elevate or transform their self-understandings in real-time in service of the polity.

For some Democrats––but especially Senate Republicans––the crux of the misunderstanding that Trump’s trial is merely another partisan escapade is rooted in what one scholar has accurately called the “legalization” of national politics by leaders untutored by the separation of powers design. The phrase separation of powers today evokes the standard legal doctrine cited by American judges, as well as the modern theory of constitutional forms made famous by Montesquieu. As the story goes, legislative, judicial, and executive functions were to be institutionally separated to create competing “checks and balances” in democratic regimes. But what James Madison’s sly invocations of Montesquieu in the 1787 Federalist Papers actually did was defend the proposed Constitution by innovating the theory considerably. The Madisonian iteration of separation of powers is, at its theoretical base, more political than legalistic, and more sophisticated in practice than what Montesquieu ever had in mind.

Under Madison and Hamilton, the principle of separation of powers becomes a description of the polity itself. A new national political architecture, in other words––a logic of governance––that sought to wed the personal ambition of office-holders to constitutional perspectives such that competing sources of power would not only mitigate power’s potential abuse, but also induce a productive form of political agonism. Opposing institutional actors would consider each other legitimate adversaries––with competing constitutional claims––rather than enemies. Senators, judges, and presidents––by virtue of their unique positions within the complicated matrix of offices the 1787 Constitution erected––would “think” and act in ways pursuant to competing public ends assigned to each branch in an order of priority. Popular will would be the chief concern of the Congress, though not irrelevant to presidents and judges; individual rights would be the leading, but not the only, purview of the judiciary; and presidents would prioritize national security, as well as popular will and rights, according to their own systemic vantage point. 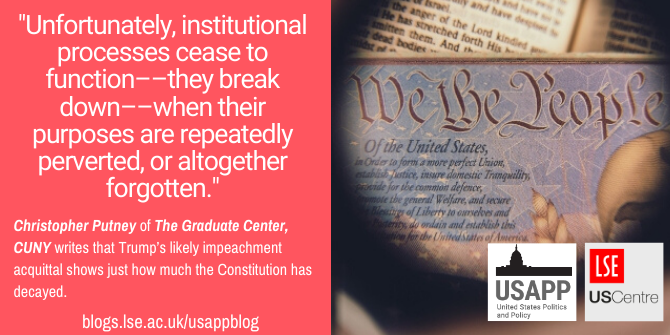 Photo by Anthony Garand on Unsplash

The reality that impeachment is a crucial feature of this deeper separation of powers logic is obscured by framing impeachment as synonymous with mere legal procedure, or a problem better suited for the judiciary alone, as Republicans have done throughout Trump’s trial. Mentioned six times explicitly in the Constitution’s text (and remarkably, in each of its Articles), the impeachment power was instead designed to address a particular type of constitutional failure––one not necessarily legal in nature. The process was thought a systemic remedy for systemic maladies: abuse of constitutional power, or the dereliction of constitutional duty. Removal from office via conviction––and the possible disqualification for holding federal office again––would be the ultimate outcomes. Neither the House, nor the Senate, nor the Supreme Court could offer further punishment beyond that concrete political judgement, even if criminal charges were filed after an impeached official was convicted and removed.

Statutory crimes might be at the center, or adjacent to, the failures of particular office-holders––Bill Clinton’s perjury, or Donald Trump’s failure to spend foreign aid according to Congress’s legally mandated procedures, for instance––but the non-legalistic meaning of the phrase “other high Crimes and Misdemeanors” was meant to capture a category of behavior not restricted to standard crimes like robbery or murder. As Jeffrey Tulis has recently reminded observers here and elsewhere, the analogy between normal legal process and the rare form of constitutional politics impeachment was designed to foster has been misleading. It has sustained the excessively legalistic understanding of impeachment that has predominated in Trump’s case, and in earlier presidential impeachments (e.g., Andrew Johnson).

In several respects, this is unsurprising. Legislators in the House indeed construct impeachment articles akin to indictments by a grand jury. But once those “charges”––which need not exclusively be violations of the law––are sent to the Senate, that body actually “recomposes itself” into a kind of trial court by having members take new oaths as jurors and judges. The Chief Justice of the Supreme Court presides over the trial in a new capacity. The legislative functions of “normal” politics assigned to both House members (“managers”) and senators are replaced by the hybrid judicial-political functions required by this new arrangement of constitutional actors.

The Senate trial was thus designed to use legal elements––lawyers, the admission of evidence, witness testimony, etc.––but only as part of a richer political enterprise meant to determine whether a president has acted in a manner not redressable by normal electoral procedures, standard litigation, or other constitutional procedures. “To say that the process of removal of a president is like a criminal proceeding is also to say that it is not a criminal proceeding.”

The core motivation behind that temporary mixture of institutional means and ends is the idea that presidential impeachments would trump a president’s formidable advantages in national politics––executive independence (including claims of “executive privilege”) and the pardoning power––since conviction and removal from office would require a collective, and non-appealable, judgement by the people’s representatives from each branch. Hence, although Hamilton and Madison each feared the possible exploitation of the ambiguity of the phrase “other high Crimes and Misdemeanors,” at base, they meant impeachment to be more than a prescribed grand-jury indictment or criminal trial. They intended a profoundly political process. Not in the narrower, partisan sense of the word familiar to us today, but in the constitutional sense: a mode of politics in which the partisan concerns of office-holders would be subordinated to the “health”––the larger integrity––of the political system itself.

In the founders’ understanding of a well-designed separation of powers regime, that extraordinary device was political precisely because it was calibrated for extraordinary political contexts; moments that go beyond standard instances of constitutional contestation or litigation, and therefore demand a judgement about how power should be deployed or domesticated in the interest of the nation as a whole.

The Constitution also provides the Congress and the executive branch with conflicting imperatives related to impeachment: the Congress has legitimate oversight claims, while the president has legitimate national security reasons to keep secrets. Despite that inherent tension, it can be reasonably argued that in recent weeks, Trump’s White House and Senate Republicans have distorted the impeachment process’s core purposes, and rendered it largely impotent. To be sure, the tension between independent discretion (presidential prerogative) and national accountability to the citizenry is built into the separation of powers scheme––but it can be inflamed and disfigured by an impeachment proceeding that becomes partisan in the narrow sense of the word. A Senate acquittal of the president, or an assertion of “executive privilege” by Trump, may not be constitutional problems per se; but the Senate’s refusal to consider relevant evidence or witnesses during the trial should be an arresting inflection point for observers concerned with the integrity of the constitutional order.

The repeated claim by Senate Republicans and the president’s counselors that criminal wrong-doing constitutes the only standard of removal for a president––even despite its apparent presence in Trump’s case––is both a sign, and an accelerant, of constitutional decay. It is a flagrant demonstration that partisan expediency has subsumed formerly robust institutional duties and norms, and that the GOP––long self-described as “the party of the Constitution”––has sacrificed those purported concerns on the altar of tribal allegiances.

Unfortunately, institutional processes cease to function––they break down––when their purposes are repeatedly perverted, or altogether forgotten. Somewhat ironic in light of that scenario, Democrats, in the course of making their case to the Senate, have actually rediscovered the Constitution’s underlying political logic––even citing at length arguments about abuse of power and the abdication of constitutional duty by Hamilton, Madison, and others. In this sense, Democratic leaders have ultimately come closer than their Republican counterparts to the more accurate understanding of impeachment as an extraordinary, vital––and inherently political––“autoimmune” process embedded in the polity’s design. But Republicans bent on reframing the process as politics-as-usual or a “hoax”––and prematurely manufacturing an “exoneration” based on a prevailing anti-constitutional legalism––have all but guaranteed that such a civic renewal may be too little, too late.

With Trump’s expected acquittal, that legalism is slated to win the day.