When he became President, Donald Trump broke with tradition by not divesting himself from his businesses and maintaining ownership of the Trump Organization. Jacob Parakilas writes that Trump’s continued involvement with the business that bears his name presents a distinct threat to national security. Any threat to the Organization, he argues, would throw US national security policymaking into disarray, as the President would be strongly tempted to intervene with US resources to protect it.

The US drone strike which killed Quds Force commander Qassem Soleimani on January 2nd, and the missile strike that Iran launched against American forces in Iraq shortly afterwards, has brought to the fore the question of where the US is vulnerable to pressure from conventionally weaker opponents. But a major national security vulnerability has been missing from that conversation: the President’s continued ownership of an international business with properties across the world.

The Trump Organization – a privately held, geographically dispersed entity whose properties are inseparable from the image and personal finances of the president – is enormously controversial in American domestic politics. And rightly so: disregarding precedent and the spirit (if not the letter) of anti-corruption law, Trump retained full ownership of the company that bears his name, whose operations are run on a day-to-day basis by his sons, Donald Jr. and Eric. Moreover, as the owner of the company, its profits continue to be the bulk of the president’s personal income – although until and unless his tax returns are released, the public and Congress have no understanding of what precisely that means.

The conflicts of interest, selling of influence and opportunities for open corruption inherent in this arrangement have been ably described elsewhere. But it is important to understand the extent to which the president’s business interests are a domestic political issue in order to understand the nature of the security risk they present.

Not a conventional risk

There is no doubt that the US has world-leading defense, intelligence and security capabilities. But those capabilities do not in and of themselves translate into the automatic realization of American foreign policy goals. They require an enabling political environment – political will, in short – and even that is a necessary, rather than a sufficient, condition to create the desired end-states. That enabling environment has sometimes been described in terms of a ‘bipartisan national security consensus’ – the idea that messy, contentious American domestic politics does not interfere with clear-headed foreign policymaking.

But to understand why the Trump Organization presents a unique security risk, it is important to understand that the ‘bipartisan national security consensus’ only really operates in very broad terms. That consensus holds, for example, the United States should be willing and able to defend its interests with both military and non-military means. In principle, that is what allows the executive branch to act quickly, decisively and flexibly in response to an attack or urgent threat.

But the executive branch has taken an increasingly dominant role in national security decision-making, and the political consensus might convince them that they have more latitude than they actually do. For example, most Americans hold unfavourable views of Iran – but the same poll numbers demonstrate that there is little consensus on whether diplomatic or military means should take precedence in US strategy towards it.

The Trump Organization presents a special risk precisely because it gives American adversaries an opportunity to pry open the existing and significant gaps in that political consensus. The President has a radically different view of the symbolic and actual value of the Trump Organization than does the national security bureaucracy or most of the public. Even the public disclosure of a credible threat to the Trump Organization would create instant resistance to the prospect of using federal resources to secure it. Could a President who has been impeached precisely for failing to distinguish between his personal fortunes and the national interest hope to convince the country that he was deploying the resources of the federal government in the people’s interest rather than his own? 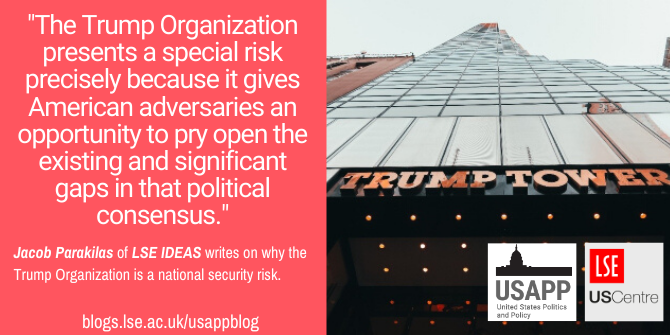 Photo by Miltiadis Fragkidis on Unsplash

At the end of the Cold War, the US military advanced a concept called “effects-based operations,” whose animating principle was that with the employment of precision weapons directed at specific categories of target, it became possible collapse an adversary’s political will and win wars more quickly and less bloodily than might otherwise have been possible. The difficult part of creating those effects was always in understanding, from the outside, what targets might produce which desired end-states.

Turning the concept around and using it to look at the US, it is possible to see in clear relief the vulnerability presented by the Trump Organization. Placing it at risk would drive an instant wedge into American domestic politics, and thereby create friction and incoherence in the policymaking process. In doing so it would likely make it much more difficult for the US to use its security capabilities as part of a coherent and effective response.

Policymakers are never singular instruments of their country’s political will. They always have personal interests, predictable ideologies and other vulnerabilities that are theoretically exploitable by an adversary. Those vulnerabilities cannot be completely eliminated, but an engaged public can advocate for a system which manages them down to the point where exploitation is difficult and unlikely.

It is possible – and certainly to be hoped for – that federal agencies have long since considered the risks presented by the Trump Organization to American national security and quietly have both preventative measures and response plans in place. But such preparations would serve to, at best, mitigate the acute strategic vulnerability that exists as long as Trump is simultaneously president and owner of his business.

Ultimately, the best way to manage this risk dovetails with the best way to promote more transparent and public-interest-minded governance: instituting and enforcing a more comprehensive regime of laws and regulations to limit conflicts of interest which apply all the way up to the President. There are ample domestic reasons to institute such a regime but considering the national security element as well might convince the public of its urgency.

Jacob Parakilas – LSE IDEAS
Jacob C. Parakilas is an author, consultant and analyst working on US foreign policy and international security. He is also an Associate with LSE IDEAS.