Next Tuesday voters across 14 states will go to the polls to select their preferred nominee to take on President Trump in the fall. Caitlin Jewitt takes a close look at Virginia’s Democratic Primary, writing that while it is not the largest state in terms of pledged delegates to be won, the Old Dominion State will still have an important role to play in the nomination contest. While uncertain polling has Vermont Senator Bernie Sanders and former New York Mayor, Michael Bloomberg, tied for the lead, the state’s open primary, which allows Republicans to participate, may be to the advantage of more moderate candidates.

With the Iowa caucuses producing chaos rather than a clear front-runner, candidates falling and surging in the polls, and “fiery” debates, the first few weeks of the 2020 Democratic nomination contest have been tumultuous and exciting. Candidates are fighting to win the momentum race, striving to dominate the media narrative. The goal is to show that they are on the upswing, well on their way to becoming the Democratic nominee. Winning in Virginia’s competitive primary on Super Tuesday is one way for a candidate to demonstrate strength and appeal.

In the 2016 general election, even with Senator Tim Kaine (D-VA) as the Democratic vice-presidential candidate, Virginia was considered a swing state. The state’s electorate is geographically sorted, with Democrats concentrated in cities, especially in Northern Virginia, and much of the rest of the state more rural and Republican. In recent years, however, the tide has turned blue, favoring the Democrats, who have racked up several statewide victories. Virginia is also the only southern state that President Trump lost in 2016. Though it may not play as critical a role come November, Virginia has the potential to be influential in the Democratic nominating process.

The Role of Super Tuesday

On Super Tuesday, voters in Virginia and thirteen other states will head to the polls to have their say in shaping the trajectory of the Democratic presidential nomination. In addition to the fourteen states holding primaries, the primary for Democrats abroad and the caucuses in American Samoa will also be held on Super Tuesday. With 99 delegates, Virginia will award the fourth largest delegate prize on Super Tuesday. Though it is dwarfed by the 415 delegates California holds and Texas’s 228 delegates, Virginia still plays a crucial role in the race.

The State of the Race in Virginia

When Super Tuesday arrives, the race is all but guaranteed to have multiple candidates and still be competitive. Like the nomination more broadly, the outcome in Virginia also looks uncertain. A recent Monmouth University poll showed a tight race in Virginia with former New York Mayor Michael Bloomberg and Vermont Senator Bernie Sanders both having the support of 22 percent of Virginia voters and former Vice President Joe Biden at about 18 percent. In this poll, former South Bend, Indiana, Mayor Pete Buttigieg, Minnesota Senator Amy Klobuchar, and Massachusetts Senator Elizabeth Warren were all below the fifteen percent threshold necessary to capture delegates. Of course, depending on where their support is concentrated, candidates may garner 15 percent of support in a congressional district and thus be eligible to receive the delegates tied to the district.

Despite Sanders and Bloomberg’s apparent lead in the state, there could be significant shifts in support as the primary draws closer. Notably, only 25 percent of voters said that they were firm in their candidate choice. The margin of the error of the poll is also +/- 4.9 percent, indicating that there is considerable uncertainty here.  This poll was also conducted before Bloomberg appeared on the debate stage (and his disastrous performance) and Sanders pulled off a big win in Nevada. 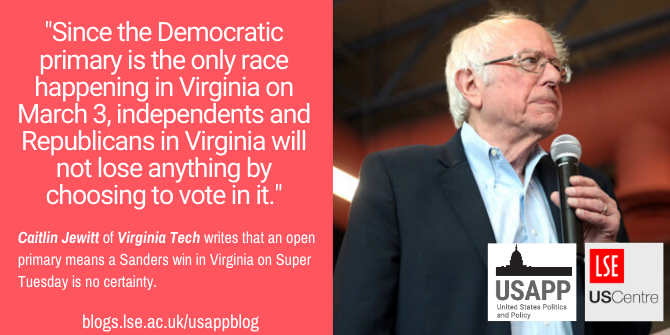 While most of the other candidates have been largely focused on the four early states, Bloomberg has been campaigning heavily in Virginia, spending significant money on advertising and campaign outreach. Bloomberg’s pitch to voters is that he can defeat President Trump in November. That may resonate with Virginia voters where many express dissatisfaction with President Trump. In an August 2019 poll, President Trump’s approval in Virginia hit an all-time low, with a majority of respondents reporting they disapproved of his job performance.

It is also possible that those dissatisfied with President Trump will turn out on Super Tuesday in Virginia. Any registered voter, regardless of party identification, will be allowed to vote for their preferred Democratic candidate because Virginia holds an open primary. This may be a particularly enticing opportunity because the Virginia Republican Party notified the Department of Elections that it will not be holding a 2020 primary. Instead, the Virginia Republican Party will select its delegates to the Republican National Convention at the party’s state convention in early May.

Since the Democratic primary is the only race happening in Virginia on March 3, independents and Republicans in Virginia will not lose anything by choosing to vote in it. This creates a different scenario compared to other Super Tuesday states. For instance, Alabama also holds an open primary but there is also a hotly contested Republican Senate primary. Alabama Republicans would be giving up their chance to weigh in on the Senate contenders if they choose to vote in the Democratic presidential primary.

An influx of independents and moderate Republicans could increase turnout in Virginia in 2020 (turnout in the 2016 Democratic primary was only 13 percent of the voting-eligible population) but may also benefit the more moderate candidates. Virginians already tend to favor more establishment Democratic candidates, as Clinton beat out Sanders in 2016 with 64 percent of the vote. Yet, if the more establishment or moderate Democrats on the ballot split the vote, that may leave room for Sanders to capture the win.