Since his election, President Trump has largely governed as he campaigned, with appeals to nativism and prejudice, and has transformed the presidency into a kind of performance, writes Christopher J. Putney. With a president who is constitutionally incapable of real leadership, he argues, American democracy is wholly unprepared for the crisis.

Stripped of its partisan iconography, all of the familiar institutional trappings, and its near-mythic role in Americans’ collective imagination, the presidency is really about one thing–power.

This power makes unique demands on all occupants of the office, but for many observers, the permanent question that undergirds the job is whether the president’s power can be utilized in service of the public good when it matters most. As the anxious surreality ushered in by Covid-19 quietly blankets the United States, we can glimpse the presidency’s core dilemmas with striking clarity. Mr. Trump’s on-going response to the crisis reveal both a shallow understanding of the purposes of executive power, as well as how vastly unprepared for this emergency Americans really are. Camouflaged in plain sight amidst news headlines and presidential tweets, the gravity of that reality is currently escaping analysts.

The ambivalence of presidential power

Defining what the “public good” is, and how it should be pursued, is at best ambiguous during politics-as-usual, and nearly impossible during national crises. By design, the presidency is one attempt to solve that permanent feature of democratic politics. It is an approximation of power that responds directly to the tension between what the Constitution’s framers, especially Hamilton, called the necessity of prerogative (the need for the president to exercise their unique powers), and the needs of public accountability.

If the concept sounds overly theoretical, just think of the many caricatures of prerogative power present in popular culture. These are actually parodied, somewhat ironically, in Donald Trump’s reality TV persona: there’s the “decisive” business leader making tough choices or closing big “deals”; or the “outsider” CEO-turned-political-messiah put at the helm of the ship of state. All are symbols, however superficial, of the logic at the heart of presidential leadership.

In truth, all Commanders in Chief, especially in the modern era, have had essentially every available resource at their disposal – and a considerable level of discretion and constitutional obligation – to act with what Hamilton called “energy” and “dispatch”; to answer the 3:00am Pentagon phone call, to make the impossible choices that no other officials can (or would likely desire to) make. The proverbial buck stops, Harry Truman famously quipped, at the Oval Office’s Resolute Desk.

One need not be a constitutional scholar to see the danger built into this model for a nation (formally, at least) that is committed to rights and the rule of law. Powerful executives might become indistinguishable from autocrats, or induced by corrupting circumstances to abuse the tremendous power they wield (e.g., Nixon’s Watergate or Trump’s Ukraine scandal). The presidency’s architects took seriously this problem of competing necessities, and structured the office’s duties and powers under Article II of the Constitution such that those contradictory impulses could serve the public. With history as a guide, we should argue about whether they were successful by their own standards. But Trump’s case is instructive because it shows, unfortunately, that the reality of crisis leadership is more harrowing in practice than in theory: just think of the governing quandaries confronted by presidents like Lincoln or FDR.

For Lincoln, the impossible circumstances of national break down, and eventually, slavery’s destruction, required notoriously extreme measures – many of which pushed the constitutional limits of executive power in ways that laid bare both its inherent dangers and its necessities. In the crucible of constitutional ambiguity and widespread violence that was the Civil War, those imperatives were ultimately vindicated, but at tremendous cost. (The American Battlefield Trust observes that, taken as a percentage of today’s population, the conflict’s death toll “would have risen as high as 6 million souls.”) Later, in the context of an unparalleled economic depression – and a World War Americans were less than eager to enter – Franklin Roosevelt would find a similar opportunity for a reconstructive politics forged in crisis, and defined by the attempt to deploy presidential power.

The key insight in such cases is not a “great man theory” of capital-H History, but instead a lesson in how highly contingent circumstances can constrain – or unleash – the possibilities of power’s uses. Mr. Trump’s ineffectual attempts to marshal his office for major policy objectives have obviously never matched the messianic persona he regularly performs for the press, on Twitter, or at campaign rallies. But the president’s profound incapacity for real leadership during the present crisis – as opposed to demagogic leadership – has been made readily clear in recent days. 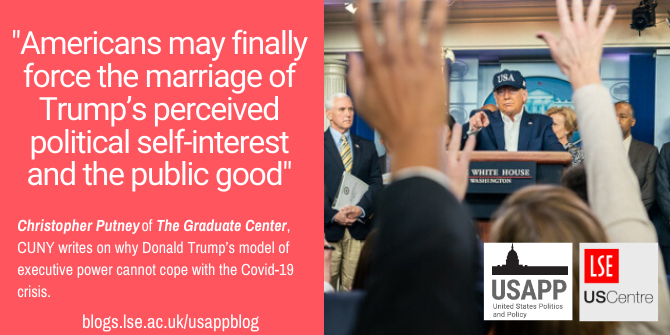 “Coronavirus Press Conference” by The White House is Public Domain

After weeks of downplaying the risks of the illness to Americans – and racializing the terms of the problem as one solvable by closing borders or rallying markets – the president declared the pandemic a national emergency. As of this week, the administration has been scrambling to do what it likely should have done weeks ago: set up an infrastructure for widespread testing, and establish clear guidelines for social distancing. But based on what we’re learning about the virus’s global spread, the newest measures may be too little too late. As Susan Rice, the architect of the Obama era Office of Global Health Security and Biodefense, recently explained, the administration “has failed miserably” to adequately respond to the illness’s rapid transmission. “The number of cases,” she emphasized, “is growing exponentially, and our health system is ill equipped to determine the scope of the disease or to treat the explosion of serious cases that will almost certainly soon present.”

Why this series of potentially catastrophic oversights?

One important explanation is that Trump’s true innovation in American politics is that demagoguery has become, under his adaptation, not just one mode of deploying power for governing purposes, but the whole of executive power. Since nativism and racial demagoguery actually occupy a perfectly traditional place in US history, the real “novelty” of Trump’s tenure is his gradual transformation of the presidency itself – from a vehicle for national stewardship and the pursuit of larger political projects – into a performance for its own sake. That demagoguery is dangerous when wedded to the most powerful reservoir of state power in the world is not a new notion. That demagogic “leadership” represents, on the other hand, the ends and the means of presidential power, an object in itself, is an entirely different matter.

Put differently, for Trump, the 2016 election never really ended. Hence, neither did the fabricated national “crisis” against which he weaponized the ideals of ‘America First’. His critiques of “globalism,” immigration, and non-whites were shorthand for the story long recycled by illiberal nationalists: that ethnic and religious minorities are invading, and thus endangering, traditional American identity. “The Wall” in that story – just like the “Wuhan virus” in this one – served as a symbol of the problem, and implied a solution. Both are examples of demagogic storytelling designed to inflame passions within Trump’s electoral base; they are tools for governing as he campaigned. The on-going erasure of the line between campaigns and governance – between political fantasy and administrative fact – may be the singular hallmark, and perhaps the most serious pathology, of Trump’s presidency. For it demonstrates that he is constitutionally incapable of substantive leadership.

Still, the deeper problem is that a real crisis – a global pandemic, for instance – demands a real response. The new coronavirus is precisely the variety of national dilemma democracies are ill-equipped to deal with effectively, since the very virtues we rightly associate with democracy are transformed into vices: partisan deliberation blocks rapid responses, as lay-opinion and rumors generate confusion, panic, and misinformation. Serious Americans in both parties should hope that those realities – which, for the same reasons, make executive power a necessity in this crisis – short-circuit Trump’s standard operating logic. Unsatisfied by Orwellian reassurances that they are actually not in real danger, as their daily lives grind to a halt, Americans may finally force the marriage of Trump’s perceived political self-interest and the public good.

But for the sake of a safer near-future, it must be recognized that such a marriage – in this case, the pandemic relief package approved Wednesday in the Senate – has happened despite Trump’s “leadership,” and not because of it. Only time will tell if that recognition is a prelude to more action, or merely one more interlude in a global crisis being unveiled in slow-motion.