While it now looks almost impossible that that Vermont Senator Bernie Sanders will be the Democrats’ presidential nominee, his populist candidacy has once again struck a chord with many Democratic voters. Taylor Downs responds to recent critiques of Sanders’ populism, arguing that his rhetoric focuses on a tiny group of elites who have wealth and power, and who are deeply invested in maintaining the status quo. Bernie Sanders’ supporters, he writes, have always been capable of their own resistance, but would be so much more empowered if they were supported by the political establishment.

New York Times columnist David Brooks, recently wrote an op-ed arguing that an “organizing myth” is key to success for presidential candidates. He focused on the relative success—compared to the other candidates—of Vermont Senator Bernie Sanders’ ‘us vs them’ anti-elite populism. While Brooks’ piece was penned before the South Carolina primary (Sanders is no longer in the lead), his idea of an “organizing myth” is still relevant.

I generally agree that an “organizing myth” is important for building culture, community, and effective collective action. For better or for worse, this seems to be what’s required and it’s good to have it called out clearly like this. I do, however, disagree with Brooks on a couple of critical points. To begin, I think he’s missing an important “good faith” vs. “bad faith” distinction in populism. (As an aside, I’d point Brooks to a recent column by Dani Rodrik, Ford Foundation Professor of International Political Economy at Harvard, on the many forms of populism as Brooks’ depiction of populism may be lacking nuance in a number of ways.).

Here’s some context for an upcoming point on populism: according to the Federal Reserve, the top 1 percent in the United States holds 32 percent of the nation’s wealth. The next 9 percent holds 37.5 percent. And the bottom 90 percent of households in the United States make up for the remaining 30.5 percent of wealth. With this in mind, there is a populism which is intended to stoke fear and hatred in the hearts of that vast majority and hasten them to action that may ultimately enrich those pulling the strings. Then there is also a populism which is intended to stoke hope and solidarity in the hearts of the majority and urge them to action which might enrich them at the (short term) expense of those few elites. While my initial reaction is that Brooks misses this distinction, it’s not the strongest rebuttal to his piece because:

(a) determining if Trump or Sanders are acting in good faith or bad faith is impossible (this is a bit tongue-in-cheek, of course—you can look at Sanders’ voting record and Trump’s business/political record for a decent approximation of who they’ve been trying to serve over the last half-century—but it’s still a hard distinction to nail down objectively) and;

(b) without more information, we have no way of knowing whether Sanders’ policies will actually allow the vast majority to better their condition (this is not at all tongue-in-cheek—there are still a small number of smart people that make straight-faced arguments for the kind of trickle-down Reaganomics that Trump endorses: corporate tax cuts, higher tax-free inheritance limits, etc.)

Anticipating these responses, let’s leave this argument behind.

My second response is, I hope, a bit more empirical. Brooks talks about “gathering” as an alternative form of myth in opposition to Sanders’ populism. He talks about going to Compton, Los Angeles, and seeing “systems that are struggling—school systems, housing systems, family structures, neighborhoods trying to bridge diversity”. In contrast to Trump and Sanders’ fueling of tensions, Brooks notices that there’s little or no populist-style “us vs. them” rhetoric in these places. There is only an urge to come together, writes Brooks. It’s the “opposite of group vs. group war” he says. 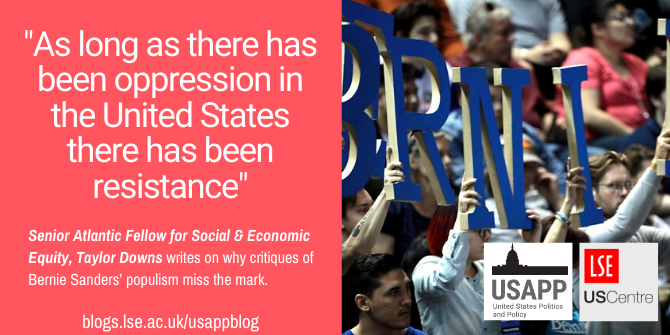 “Bernie Sanders supporters” by Gage Skidmore is licensed under CC BY SA 2.0

What’s missing from this analysis though, is that in the places Brooks visits there is no “other” that exists outside Sanders’ key demographic. Yes, Sanders is exclusionary, and he does create a mythological monster, but that monster is so minutely small in numbers and so absolutely enormous in wealth and power (remember this lovely illustration by CBS?) that it’s not a visible part of the daily lives of almost everyone else.

How elites protect themselves – and the status quo

A lot of the work being done by the elite in the US is to legitimize their own position (though it’s important to say that this doesn’t have to be in the sense of some nefarious “project”—is just the regular old, fairly mindless job we all do in our own way to sustain and protect ourselves and our way of life.) This often occurs in the framing of pro-business policies as “common sense”, and the shifting of the bounds of “civilized conversation” so far Right that it’s hard to get anything done with/for people experiencing poverty unless you’re willing to dispute the “rules of the game”. As an aside, this was ultimately President Obama’s shortcoming. His strategy was to fight for the people from within the rules of the game, the rules of “civility”. Then he met Senate Majority Leader Mitch McConnell.

But what about all those non-1-percenters that supported folks like the former mayor of South Bend, Indiana, Pete Buttigieg, or now front-runner Joe Biden? Great question. I’m reminded of an amazing article in the Atlantic from Matthew Stewart, “The Birth of a New American Aristocracy” about the top 9.9 percent that enable and sustain the power of the 0.1 percent. I doubt that Brooks’ “common man” subjects include many from the top 9.9 percent, but if he met them, he might find a decent amount of resistance to Sanders’ message as well. For the 9.9 percent (of which many readers may be a part), the status quo seems to be working! It seems to be working well, in a very short-term sense.

Pete Buttigieg’s and Joe Biden’s message of a “return to normal” sounds OK if you have healthcare, are on track to pay off your mortgage, and are offended by Trump’s ‘Vegas-style’ White House vulgarity. There may be some big issues with the environment, political instability, loneliness, poverty, inequality, and criminal justice, yes. And don’t get me wrong, these things may seem legitimately problematic to the 9.9 percent, but they’re issues that will ultimately get cleared up within the normal course of “progress”. There is no need for revolution, which might destabilize everything that is working well for them. This particular response to the troubling “remaining issues” yet to be dealt with by liberal progress reminds me of Lord Kelvin’s famous speech on what he felt was the end of physics in 1900. He mentioned two small “clouds” on the horizon (blackbody radiation and the Michelson-Morley experiment) which were sure to clear up shortly. He could not have been more wrong, and Albert Einstein’s (among others’) work on those problems led to a complete paradigm shift—the discovery of fundamental limits to how classical physics could be used to explain or understand the universe. An entirely new physics was born.

I agree with David Brooks in that the vast majority, the 90 percent, from whom Sanders draws his support, are capable of “gathering” and “repairing systems in their lives” entirely apart from the indisputable mess that is national politics. Do not ever forget this. As long as there has been oppression in the United States there has been resistance. But now, for one moment, imagine what our future might look like if they were supported by a political establishment that had their backs. That’s a future that I want to be a part of.

Taylor Downs
Taylor Downs is a Senior Atlantic Fellow for Social & Economic Equity, focusing on the securitization of national artificial intelligence policy and how it influences democratic participation in the regulation of technology. He received the first annual Harvard SECON Social Impact Award and the 2017 Antonio Pizzigati Prize for software development in the public interest. He was named to Forbes’ 30 under 30 list, is a 2012 Echoing Green Fellow, a 2014 Rainer Arnhold Fellow, and a 2015 PopTech Fellow. He is the founder and Head of Product at Open Function, an iPaaS company that serves the international development sector, driving efficiency at large international organizations like UNICEF, The Wildlife Conservation Society, and the International Rescue Committee, as well as leading social businesses and NGOs like MyAgro, Lwala Community Alliance, and LivelyHoods.