In recent weeks, a number of US Senators have been criticized for selling stocks just before most had been able to realize the seriousness of the threat posed by Covid-19. Lauren C. Bell writes that US politicians have a long history of stock trading in ethically murky circumstances, and that Congress’ recent efforts to address this problem with legislation does not go far enough.

In mid-March, as the US was first beginning to realize just how dangerous the novel coronavirus really was, ProPublica reported that one-month prior, Senate Intelligence Committee Chairman Richard Burr (R-NC) sold off stocks worth up to $1.7 million just as his committee was receiving daily intelligence briefings on the threat of Covid-19. At almost the same time, The Daily Beast revealed that Senator Kelly Loeffler (R-GA) —who happens to be married to the chair and chief executive officer of the New York Stock Exchange—also sold multiple stocks on the same day that the Senate Health Committee, on which she sits, held an all-day briefing by administration officials on the coronavirus.

There were other senators, including Democrat Dianne Feinstein (CA) and Republicans James Inhofe (OK) and Ron Johnson (WI), whose financial disclosures to the Senate Ethics Committee indicated that they, too, sold stocks in the weeks leading up to the COVID-19 outbreak in the US, but their sales were less obviously connected to information they received in their roles as US Senators and were more plausibly explained by other evidence.

The US Department of Justice announced at the end of March that it was opening an investigation into lawmakers’ stock transactions; so far, Burr appears to be in the most hot water.

Accusations that members of Congress have profited from knowledge they acquired in their official capacities are nothing new. Charles Guisst, in his 1997 book Wall Street: A History from Its Beginnings to the Fall of Enron, writes that in “[t]he period prior to the Civil War saw” Whig/Oppositionist Congressman Russell Sage (NY) “engaged in many railroad deals, usually using his insider’s knowledge gained in Congress to move in on deals at the appropriate time.” The Congressional Misconduct Database identifies three members of Congress who were ensnared in the 1873 Crédit Mobilier Scandal, which involved the sale of, and profit from, cut-rate shares of stock in a fraudulent construction company created by Union Pacific Railroad to bribe government officials. 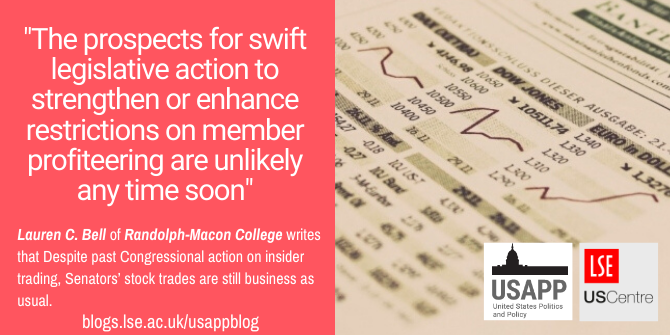 More recently, it was noted in the Journal of Business and Securities Law that in 2005, Tennessee senator and future US Senate Majority Leader Bill Frist sold his holdings in Hospital Corporation of America (HCA), a company his family founded, just days before the stock price dropped substantially over a period of successive weeks. Former House Financial Services Committee Ranking Member Spencer Bachus was accused of insider trading when he made a series of stock moves throughout the summer of 2008. Both Barack Obama and Hillary Clinton were briefly investigated, at least by the media, in the mid-2000s for potential ethics violations related to the stock market. In 2019, Representative Chris Collins (R-NY) was investigated for, and later convicted of, insider trading violations.

Despite multiple examples of members of Congress benefitting, or appearing to benefit, from information they obtained in the course of their regular duties, for several decades leading up to congressional action in 2012, the conventional wisdom was that insider trading laws did not apply to Congress. According to Sung Hui Kim, writing in the Cornell Law Review in 2013, this was because members of Congress were thought to be immune from federal laws prohibiting insider trading. Insider-trading laws required a breach of fiduciary responsibility, and members of Congress, simply put, were thought to have no fiduciary duty to anyone.

In 2012, Congress passed the STOCK (Stop Trading on Congressional Knowledge) Act to “prohibit Members of Congress and employees of Congress from using nonpublic information derived from their official positions for personal benefit, and for other purposes.” Versions of this act had been introduced as early as 2006, but it was not until 2012 that the Act was signed into law. (At the time the STOCK Act was passed, McClatchy News reported that Senator Burr was one of only three senators to vote no on the bill.) In addition to banning the use of non-public information for private gain, including by members of Congress, the Act shortened stock sales’ reporting timelines from within a year to within 45 days—which is how we learned so quickly about the Burr and Loeffler sales.

The STOCK Act made it explicitly illegal for members of Congress to profit from classified or other private information they received in the course of doing their jobs. And it seemed to work: in a December 2019 editorial in the New York Times, citing a 2017 study by Public Citizen, the editorial board wrote: “The volume of stock trading by members of Congress declined by 65 percent in the three years after[the STOCK Act] took effect, compared with the three years before its passage.”

Still, making congressional insider trading illegal is the easy part. Proving that members committed a violation of the STOCK Act and attendant federal law remains difficult. Moreover, many political observers believe that the Act does not go far enough. Members are not required to put their assets in a blind trust, nor are they required to forego continued trading or earning profits on existing stocks. In May 2019, US Senators Jeff Merkley (D-OR) and Sherrod Brown (D-OH) introduced legislation to strengthen legal and ethical prohibitions on members profiting from stock holdings. The legislation was already unlikely to gain much traction in the legislative graveyard that the Senate has become in recent years. Now, with Congress facing a global pandemic, an economy turned upside down nearly overnight, and an upcoming presidential election, the prospects for swift legislative action to strengthen or enhance restrictions on member profiteering are unlikely any time soon.

Congress’s approval ratings have been deeply underwater for decades; the recent revelations of possible insider trading on the part of a handful of members will further entrench the view among a large swath of the American public that members of Congress seek to enrich themselves at the expense of their constituents and the country. With the US facing urgent public health and economic crises, this further erosion of public confidence could not be coming at a worse time.