In the 2016 presidential election, Donald Trump very nearly won in Minnesota, only missing out by 45,000 votes in the state. Rubrick Biegon takes a close look at whether Minnesota should now be considered to be a swing state. He writes that despite Trump’s recent appeals there, the North Star State’s progressive history and present may make a victory for him very difficult this fall.

Donald Trump’s ability to break through the fabled ‘blue wall’ was central to his 2016 election win. His narrow victories in Michigan, Pennsylvania, and Wisconsin were surprising—none of those states had been won by a Republican presidential candidate since 1988. Trump was close to capturing one additional Midwestern prize: Minnesota. Do ongoing realignments in American politics mean the North Star State will now be a battleground from now on?

Although Barack Obama won Minnesota twice by comfortable margins, Hillary Clinton edged out Trump by just 1.5 percentage points (or approximately 45,000 votes) in the 2016 contest. The state was not expected to be in play. In a recent appraisal of swing states for Politico, the magazine’s senior politics editor wrote that a Trump victory in Minnesota ‘would have been the shocker of a shock election. His stunning near-miss… has placed it high on the Trump re-election campaign wish list’. Trump has invested heavily in Minnesota this time around, after having just one staffer on the ground there in 2016.

From Blue to Purple

Minnesota has a long history of liberal and progressive politics, sometimes attributed to the Scandinavian heritage traditionally associated with its residents. The state branch of the Democratic Party is officially the Democratic-Farmer-Labor (DFL) Party, the result of the merger of the Democratic and Farmer-Labor parties in 1944. Its prominent politicians have included Floyd B. Olson, a socialist governor during the 1930s, Hubert H. Humphrey, a key architect of 1960s-era civil rights legislation (and 1968 Democratic presidential candidate), and Paul Wellstone, a populist senator in office from 1991 until his death in 2002.

Among individual states, Minnesota has the longest active streak of voting for Democratic presidential candidates. The last Republican to win its electoral votes was Richard Nixon in 1972. Even during Ronald Reagan’s 1984 landslide, Democrat Walter Mondale, vice president under Jimmy Carter, was able to carry his home state. Somewhat paradoxically, as Minnesota has diversified in recent decades it has gradually become more ‘purple’ than ‘blue’. In 2006, Minneapolis sent Keith Ellison to the House of Representatives, making him the first Muslim member of the US Congress. He was succeeded by Somali-American Ilhan Omar, part of ‘the Squad’, an informal group of progressive congresswomen elected in 2018. And yet the state also has a culturally conservative streak that produced Rep. Michelle Bachman, a voice of the Tea Party movement in the early-2010s.

Related to its shifting demographics, there is a growing (sub)urban-rural divide in Minnesota that reflects national patterns. In the 2018 midterms, Democrats picked up two House seats from Republican incumbents in suburban districts, only to watch the GOP take two rural seats held by Democratic lawmakers. Rep. Collin Peterson, from northern Minnesota’s seventh district, held his seat. Reflecting Trump’s relative popularity among his constituents, Peterson was one of only two Democrats to vote against impeachment in December 2019. 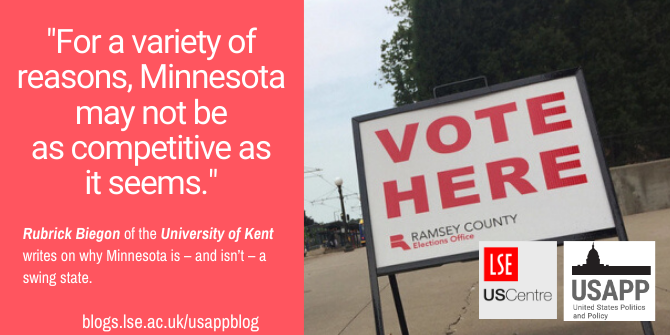 Trump clearly thinks Minnesota is up for grabs. He has visited the state a number of times as president, holding campaign-style rallies in several places. Rather than appealing to voters in the Minneapolis-St. Paul region, home to over half of the state’s population, Trump’s strategy centres on expanding his base. By bolstering turnout in rural counties, he could potentially find the votes to overcome the narrow margin of his 2016 loss. In such a scenario, however, he would need to limit his deficit in the Twin Cities metropolitan area. Data suggest Trump struggles with the suburban demographic relative to previous Republicans.

The Uncertainties: Biden, the Veepstakes and COVID-19

For a variety of reasons, Minnesota may not be as competitive as it seems. Much will depend on events at the national level, of course, but developments within the state since Trump’s election suggest an uphill battle for the incumbent president. All state-wide elections held in 2018 (including for governor, attorney general, and two Senate seats) were won by Democrats. The president’s approval rating in Minnesota has hovered around 40 percent for most of his first term. And it may be that presumptive Democratic nominee Joe Biden is more palatable to rural voters than Clinton was in 2016, making it harder for Trump to ‘run up the score’ in outlying counties.

Biden’s strong performance on Super Tuesday included a victory in Minnesota over Bernie Sanders, who won the state’s 2016 primary. Biden benefited from Senator Amy Klobuchar’s decision to drop out of the race and endorse the former vice president. Now in her third term in the Senate, Klobuchar remains popular in the state, despite polling behind both Biden and Sanders in the primary contest. She is discussed as a potential vice presidential pick, and her presence on the ticket would likely move Minnesota well out of Trump’s reach.

Widely seen as a moderate, however, it is not clear that Klobuchar would help Biden generate enthusiasm among younger and more progressive voters at the national level. Although Biden runs comfortably ahead of Trump in Minnesota in head-to-head polling, there are enough doubts about his strength as a campaigner to render this lead fairly tenuous. Coming from the establishment wing of the party, his candidacy is unlikely to resonate with the populist impulses found in a certain cross-section of the Minnesota electorate—one of Clinton’s problems in 2016.

The COVID-19 crisis and its economic and political fallout will add further uncertainty into the mix. This could encompass procedures for the election itself, assuming the public health aspect of the pandemic is still impacting everyday life come November. In contrast to other Midwestern states, Democrats have a firm grip on the executive branch in Minnesota, making it easier to implement a comprehensive vote-by-mail system (despite some legislative opposition). If required, this may boost overall voter turnout, which is often understood as benefitting Democratic candidates.

A staple of ‘horse race’ journalism, the term ‘swing state’ doesn’t have a settled, scientific definition. From a certain vantage, a state becomes a battleground when campaigns treat it as such, investing resources and targeting voters in accordance with their own strategies and modelling. By this measure, Minnesota is more ‘swingy’ than it has been in a long time. In general, however, and relative to some of its neighbours (namely Wisconsin, which has moved more sharply to the right since the Great Recession), the evidence suggests that Minnesota probably belongs in a separate category for the time being.

May 1st, 2020|2020 Primary Primers, Elections and party politics across the US, Rubrick Biegon|3 Comments
Previous post Next post