Last month a government commission recommended that women register for selective service – the draft – for the first time. Alair Maclean writes that changes to who is able to serve in the armed forces is often an indication of wider social change. Including women in selective service registration, she argues, not only eliminates gender discrimination in the military, it also has the potential to further break down gender stereotypes more widely.

In March, a presidential commission recommended that women register for the draft in case the US needs to mobilize in an emergency. In doing so, the commission members cited the goal of increasing the supply of recruits to the armed forces. But such a change would also solidify arguments in favor of gender equality, as well as give women standing in any debate about whether or not to implement conscription.

While the commission’s report focused on service of all kinds, commentators paid the most attention to the 49th and final recommendation: including women in the federal program that has applied to men for the last 40 years. The eleven members of the commission collected information and listened to testimony over two and a half years. Ultimately, they advocated that women register alongside men when they turn 18.

The United States has operated some form of registration system as the precursor to mandatory military service in most years since the Civil War. In the first seven decades of the 20th century, men were drafted to fight in both World Wars, as well as the conflicts in Korea and Vietnam. Men served at high rates even during the peacetime period between those latter two wars. In my research on a cohort of students who were high school seniors in 1957, nearly half of men enlisted in the armed forces.

Since 1980, men have had to register with the selective service system, which collects the information to be used to draft troops in case of emergency. In theory, the system ensures that if there is a war, the US would be able to induct 100,000 troops within 7 months to fight a large-scale war. To put this number into perspective, the armed forces added 165,000 volunteer enlisted service-members in the most recent year for which data are available, 2018.

Over the last 47 years, the armed forces have relied solely on volunteer recruits. Indeed, all the service-members who have fought in Afghanistan and Iraq volunteered for service. To make the point that this burden of service was inequitable, Congressman Charles Rangel introduced legislation to institute a draft at least five times in the decade and a half after the beginning of those wars.

Women in the military

Women have never registered for the draft in the United States, though they have gradually come to play a larger role in the US military since World War II. During that war, they served in only auxiliary roles in gender segregated branches. In 1948, they were first allowed to serve in regular roles throughout the armed forces. They have served at rates increasing from 3 percent at the beginning of the volunteer era to 16 percent of active duty enlisted forces today. 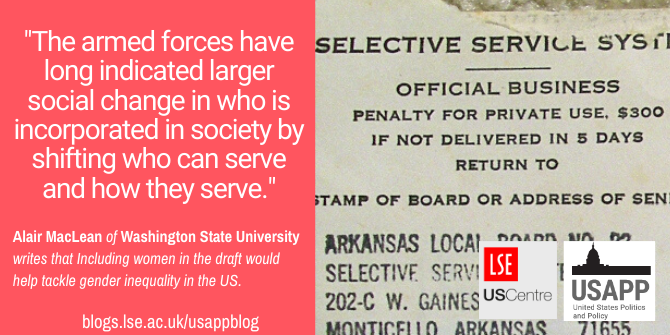 “Selective service, August 1972” by Lisa Brewster is licensed under CC BY SA 2.0

Until recently, the Department of Defense excluded women from units involved in combat. In 2013 and then more fully in 2015, the Department opened combat units and thus positions to women, after years of debate, getting rid of this vestige of official occupational segregation. Congress went further, ordering that the military provide standards for these occupations that are gender-neutral.

These changes altered the legal context of registration for the draft. In 1981, the Supreme Court ruled that males-only registration did not violate the constitution because the draft was meant to provide replacements for combat troops. Now that women can perform these roles, advocates have again claimed that excluding women from registration violates the constitution.

The arguments for and against women registering

While the members of the presidential commission primarily advocated expanding registration to women in order to increase the quantity and quality of potential conscripts, they also recognized that such a shift has the potential to break down gender stereotypes.

Indeed, some opponents drew on such stereotypes to argue that women should not be drafted because they differ from men biologically. They focused on the roles that women play as mothers, bearing and caring for children during the years when they would most likely serve in the military. They also argued that women are weaker, on average, than men. And they pointed to empirical research that shows women tend to be injured more frequently than men during military training. But the draft has often exempted men with dependents, and pregnant service-members are not currently deployed.

Other opponents argued against not just the idea of women being drafted, but the notion of a draft on any grounds. Some argued against it for pacifist reasons, others that it costs the government too much to administer a program just to collect information in case a draft is needed.

Yet the armed forces have long indicated larger social change in who is incorporated in society by shifting who can serve and how they serve. In doing so, they have often presaged or at least reflected shifts in how the members of different status groups are perceived. Through the Second World War, African-Americans served in racially segregated units. In 1948, Harry Truman got rid of this formal exclusion, beginning the process of racial integration of the armed forces. This shift came six years before Brown v. Board of Education outlawed such segregation in schools in 1954. And it took place a decade and a half before Congress enacted the Voting Rights Act of 1965 to eliminate political barriers based on race.

During the Clinton Administration, the armed forces kept gay people from serving openly under the policy of “don’t ask, don’t tell.” The policy was repealed in 2011, four years before the Supreme Court ruled that gay marriage should be allowed in all states.

In including women in selective service registration, the government would address another distinction based on a status characteristic in eliminating the last formal vestige of gender segregation in the military. As a consequence, women would have a greater claim to participate in any debate about whether a draft should be implemented.

Alair MacLean – Washington State University
Alair MacLean is an Associate Professor of Sociology at Washington State University. Her research and teaching focus on inequality and the life course. Her research has focused on unequal pathways through the transition to adulthood, first examining military service and, more recently, higher education. In other work, she examines how people’s lives are shaped by the places where they live.