After spending 18 years in the House of Representatives, Republican Steve King of Iowa, will no longer be heading to Washington DC following his recent primary election loss. Álvaro J. Corral writes that while King may be leaving national politics, during his time in office, the Republican Party has moved to be aligned much more closely with King’s once fringe anti-immigration views such as building a border wall and linking immigration with terrorism.

Earlier this month Steve King lost the Republican Party’s primary for Iowa’s 4th Congressional district, a seat he first won in 2002. Yet for many immigrant rights activists King’s loss is overshadowed by the troubling realization that his anti-immigrant vitriol and white supremacist beliefs lasted for 18 years in Washington DC in the first place and that his mantle is carried forward by Donald Trump and Stephen Miller, the President’s Senior Adviser.

Steve King may soon be out the door but Stephen Miller, the administration’s immigration architect, remains as powerful as ever after capitalizing on the pandemic to effectively seal the southern border and hollow out the asylum process. Although Steve King’s comments last year defending white supremacy were widely condemned by his colleagues, when reporting documented the extent of Stephen Miller’s ties to white nationalists few Republicans voiced strong opposition or called for his resignation.

The news of King’s defeat could be a sign of things to come, perhaps suggesting a wider rebuke of the anti-immigration agenda that was the centerpiece of Trump’s presidential campaign and the driving force of his presidency. But rather than looking forward, reflecting on the trajectory of Steve King’s immigration rhetoric and policy prescriptions from the fringe to the mainstream reveals the extent of the Republican Party’s transformation.

For example, King was long the champion of reforming the 14th amendment to deny birthright citizenship to the children of undocumented immigrants—introducing H.R. 140 every congressional session since 2011. The bill often received the support of many colleagues including thirty Republican house members who co-sponsored H.R. 140 during the 116th Congress and the idea was revived by the Trump Administration in 2018. 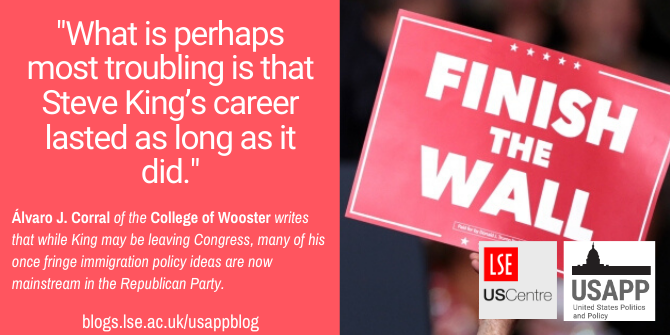 The border wall was also long the subject of Steve King’s attention. King’s original prototype for a border wall shared on the House floor was topped with electrified barbwire which he assured should not cause any alarm because “we do that with livestock all the time.” King’s ideas for the border wall were shared with influential members of the Trump Administration including Department of Homeland Security Secretary Gen. John Kelly during the preparations of the transition team in January of 2017. Trump and Miller would go on to float these same ideas years later and while the use of electricity has been shelved, it appears that an effort to paint the wall black in order to maximize heat absorption appears to be moving forward.

The GOP’s hardening stance on immigration since 2004

All of these measures are motivated by Steve King’s core message – non-white immigrants are unworthy of humane treatment because they are inferior. The dehumanization of immigrants underlies the Border Patrol’s strategy of “Prevention Through Deterrence” which funnels undocumented border crossers to the most dangerous terrain in the southern border where hundreds die every year. It was at the root of Mitt Romney’s “self-deportation” plan which was predicated on subjecting undocumented immigrants and their families to such levels of hardship that they are forced to leave the US. This logic of cruelty toward immigrants for the sake of sending a “message” about law and order delivered us images of kids in cages.

A brief comparison of the 2004 and 2016 GOP party platforms on the subject of immigration suggests that Steve King leaves behind a Republican Party more in his likeness than the one he found. For example, the 2004 GOP platform, drafted during his first term in Congress, makes no mention of constructing a border wall, only enhancing border security, but the 2016 GOP platform calls for a wall that covers the “entirety of the southern border.” The 2004 GOP platform contains three mentions of the word “alien” in reference to immigrants, the 2016 platform contains six. While the 2004 document does use the phrase “illegal alien” the 2016 platform’s rhetoric is far more severe – describing them as “criminal” and “dangerous aliens” who pose “grave risks” despite the near “consensus” that increased immigration is either mostly unrelated and often negatively associated with crime.

The 2004 GOP platform called for a temporary worker program which would allow for some to “come out of the shadows and to participate legally in America’s economy,” meanwhile the 2016 document characterizes the legal immigration system that grants new lawful permanent residency to 1 million immigrants every year as “indefensible.” Lastly, and perhaps most tellingly, despite the 2004 platform’s greater proximity to the events of 9/11 it is the 2016 document which more firmly links immigration to the specter of terrorism describing 2016 as “a time of terrorism.”

A narrative of immigrant inferiority now taken up by Trump

Throughout his time in Congress, Steve King made numerous overtly racist remarks that demonized immigrants even questioning the growing sympathy toward DREAMers by suggesting that some were drug mules “with calves the size of cantaloupes” masquerading as honor roll students. This dehumanizing language directed toward immigrants, refugees, and asylum seekers was steadily normalized by King throughout his years in Congress paving the way for Trump to deploy this rhetoric with regularity. Whether it is Trump responding with laughter to the suggestion that migrants should be shot by Border Patrol, saying that immigrants will “infest” the country, and referring to immigration as an “invasion” – language that would go on to appear in the racist manifesto written by the man who murdered 23 people at an El Paso, Texas Wal-Mart last year –the statements are part of a pernicious narrative of immigrant inferiority.

The irony, of course, is that Iowa’s growing population of Latinos, the group so maligned by Steve King, has been an essential lifeline for the state’s economy. Yet the central content of Steve King’s message—that Latino immigrants and People of Color pose an existential threat to the country—was not the focus of opponent’s campaigns against him, instead it was that his lack of committee assignments rendered him powerless to the constituents of Iowa’s 4th district.

Thus, King’s attacks on immigrants, his connection to Europe’s most ardent right-wing politicians including Marine Le Pen, Geert Wilders, and Viktor Orban, his endorsement of a white supremacist for mayor of Toronto because of her “Pro Western Civilization” values, and his defense of white supremacy and white nationalism only indirectly led to his loss. What is perhaps most troubling is that Steve King’s career lasted as long as it did. Steve King may soon be gone from the halls of Congress, but his ideas linger in the White House—at least through November.