For several months, protests have been ongoing in Portland, Oregon, following the police killings of Breonna Taylor and George Floyd. Aaron Roussell and Gisela Rodriguez Fernandez examine the intentional misconceptions which have developed to delegitimize the protests in Portland and elsewhere, writing that despite sentiments that such tactics are ‘not American’, the use of police violence and federal agents against protests in US cities is nothing new.

Portland, Oregon, the city where we live, research, teach, and organize, is once again in the national and international news. We began writing this on Day 70 of continuous nightly protest in Portland. The protests began as a result of the killings of Breonna Taylor and George Floyd in Louisville, Kentucky, and Minneapolis, Minnesota, respectively by local law enforcement, but the Portland Police Bureau (PPB) has its own record of brutality and murder of Black Portlanders, as well as those experiencing mental health challenges and houselessness. Our overarching caution is simple: None of this is new. In 2017, a Portland police officer shot and killed Quanice Hayes, a 17-year-old Black teen while Hayes was on his knees (a full list of Portland shootings and deaths in custody available here). Police killings of Patrick Kimmons and Jason Washington soon followed.

To understand the political depth of these events and their national and international repercussions, we must address a few common fallacies and intentionally created misconceptions. It is through this umbrella of cautions that we discuss the events and tactics.

Protests across the US

First, Portland is not alone in its resistance. Following the Minneapolis uprising where poor and working class youth took over several police precincts, more than 2,000 towns and cities in the US exploded in protest against police violence against Black people. Among the many demands put forth in Portland, the Portland African American Leadership Forum presented a plan to divert $50 million of PPB’s budget to social services and investment in Portland’s Black, Indigenous, and Brown communities. The City Council, despite public support and the considerable research that went into it, dismissed the plan.

Black Lives Matter is not just about police; police homicides are an outcome of the structural white supremacy that also resulted in the lynching of Ahmaud Arbery in Georgia in February, the murder of Trayvon Martin in Florida in 2012, and countless others. This structural racism—a key component of racial capitalism—produces both the expropriative prison nation in which we live and the antiBlack tribulations suffered by Black people daily including gentrification, discrimination in housing and employment, and racial profiling.

Although continuous protest is itself a measure of the importance of the issue, it was none of these things that brought Portland inter/national attention. Rather, it was the deployment of federal agents to quell Portland’s protest by overwhelming force and extra-judicial, paramilitary tactics such as taking protestors into unmarked vans, the declaration of a “no fly zone” in downtown Portland, a circling Air Force Surveillance plane (presumably for gathering signals intelligence), bulk data surveillance of entire social media platforms, and mass arrests and injuries of protestors, including journalists, whose constitutional rights were subsequently hobbled. However this was not the first time federal intervention was threatened (and not just in Portland). The constitutional parameters on the use of force federal agents must follow is unclear, but a federal judge articulated essentially the same rules that govern the Portland Police Bureau (PPB). As of August 11, 2020, the (new) local prosecutor determined that many charges against the ~600 protestors will be declined, including interference with police officers, disorderly conduct, criminal trespass, escape, harassment, riot, and (some) resisting arrest charges. The adjudication of the nearly 100 federal charges remains unclear.

“Protester” by Chad Davis is licensed under CC BY NC SA 2.0

How protests are delegitimized

Next, contemporary political discourse requires every media commentator to draw bright lines between “peaceful” and “violent” protest. This is a distraction. The general effect is both to delegitimize protest and legitimate state violence. Demonizing some protestors at the expense of others breaks protest momentum, fractures solidarity, and justifies the use of extreme state force. This division has several effects:

1) It sets up “violence” as a proxy for political affiliation where “good” protestors have a message that is worth supporting through free speech rights. In mainstream political discourse, acceptable messages are inherently reformist: trust the system and vote. “Bad” protestors thus are simply inherent criminals who are taking advantage of social unrest. On the ground, however, protesters organize and march together, often agreeing on a diversity of tactics, which can include property destruction. As activist Tamika Mallory said at a rally in Minneapolis, “I don’t give a damn if they burn down Target, because Target should be on the streets with us calling for the justice that our people deserve.”

2) It sets the stage for the “outside agitator” trope, deployed to some effect in Minneapolis. This tactic is from the Civil Right Movement, allowing local officials to nullify homegrown demands for justice and blame outsiders who are imagined not to share the local values. This is nonsensical in the face of protests in nearly every US city. Unsurprisingly, the outside agitator trope is also a proxy for political affiliation—contemporarily, outside agitators are often portrayed as young white anarchists unconnected to local grievances. This highlights racial divisions while ignoring interracial and class solidarity.

3) It justifies police violence as defensive violence. Threat, of “violent” protestors or unarmed Black people, is the bedrock upon which offensive police violence rests. The difference is that the former evokes political threat and less-lethal weaponry while the latter evokes the existential social fear of Blackness, a rift at the heart of US (and global) society, and lethal force. It is a tactic in which police and federal agents can produce the conditions needed to use as much force as they like on whomever they choose, justified by dubious use of the word “violence.” Indeed, most of the “violence” committed by protestors comprises graffiti and “attacks” on the “sacred fence” unlawfully erected in downtown Portland to keep protestors away from the federal courthouse. Law enforcement attack people indiscriminately.

Why police violence and Federal intervention in Portland is “very American”

Finally, is the policing of Portland’s protests and related federal deployment unprecedented on US soil? Is it exclusive to Donald Trump? As a CBS reporter mentioned on air, “This doesn’t look very American”. This captures the general sentiment of the US mainstream media about the police violence and Trump’s abuse of power. Trump’s “un-American” behavior is seen as unbecoming of a constitutional republic and instead comparable to the behavior of overseas dictators.

Despite political spin, the protests are not about Trump specifically, although federal deployment has amplified that interpretation. Again, none of this is new. These tactics have been honed for centuries on US Black and Brown communities which have experienced the kidnapping and jailing of loved ones historically and during contemporary mass incarceration and deportation regimes. Domestically, examples such as DC’s “jump-out squads” and Chicago’s “black sites” remind us that these tactics are normal for local police operations and why communities have resisted police incursions for generations. Overseas, communities around the world have experienced these tactics by the US military directly, vicariously, and with training from local US police.

Just as the US Constitution provides loopholes for slavery abolition, other constitutional protections can be suspended as well, particularly 100 miles with the US border. Since airports count as borders, this includes most of the US, but Border Patrol operates beyond this limit as well. For example, the Border Patrol Tactical Unit (BORTAC), deployed to Portland for protest suppression, also carried out a military-style raid on the humanitarian organization No More Deaths’ aid station near the US-Mexico border. BORTAC completely destroyed the station, slashing volunteers’ tents, and abducting 30 migrants. As far back as 1966, Border Patrol created and trained paramilitary units in Guatemala which raided communities, disappearing and assassinating dozens of leftist community leaders. Violence and suppression wreaked by the US is the rule, not the exception—it is very American.

Contrary to the headlines, Portland, like many US cities, is used to federal intervention. Even as BORTAC and other agencies officially withdraw from Portland, federal Immigrations and Customs (ICE) agents remain, alongside US Marshals, Federal Protective Service, and Homeland Security. Federal agents exerted considerable force in 2018 to repress Portland’s “Occupy ICE” resistance to immigration detention and family separation. Federal agents coordinated with local police nationally to crush the 2011 Occupy protests, including in Portland. Federal intervention rarely leaves Portland improved, even in the case of well-intentioned efforts like PPB’s 2012 federal settlement agreement, which did little to curb PPB’s violence against the mentally ill. Moreover, police violence continues after the official federal withdrawal as the Portland Police Bureau again flooded the streets with tear gas, slashed tires, and broke car windows.

Mainstream media and the public must understand is that repression at home and abroad are linked. Black, Brown, and Indigenous communities in the US continue to experience this first hand. What Portland and the US needs is not more tear gas, but radical solidarity with these communities here and around the world and mutual aid to meet the challenges we face. 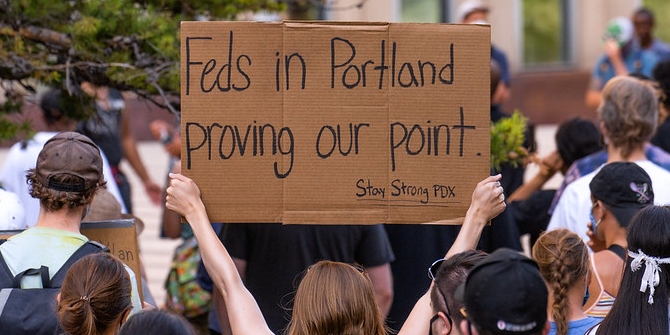