Last week the Republican Party held its national convention to nominate Donald Trump as their candidate for the 2020 presidential election. Bonnie Honig writes that the convention gave us another look at what power can look like if unchecked and unbalanced.

“Here. Don’t say I never gave you anything,” Trump sneered when he tossed a candy at German Chancellor, Angela Merkel, early in his presidency. (This was at a 2018 G-7 meeting, though Trump may have mistaken it for a Middle School lunchroom.)

Last week at the Republican National Convention (RNC) he tossed a candy at the American people while he took everything else away. “Impeach this!” he all but said as he strode down a long staircase (no escalator to be had) and then strutted around a White House turned from a symbol of public government into a stage for his Republican campaign for the Presidency.

Recasting the RNC Convention into the template of TV shows like The Bachelor, Trump rose above the slight vulnerability of electoral uncertainty (would the Party choose him? Would the country?). Instead, Trump took the television role of the one who does the choosing. Who would get the rose, freshly plucked surely from the new and improved Rose Garden? Ivanka? Or Melania? The dirty look that passed between the women after Ivanka spoke was straight out of one of those romance reality shows. So was the curved staircase on which the First Couple made their entrance, she tottering on stilettos, he — just tottering.

On the South Lawn of the White House sat 1500 people unmasked in a pandemic defying the risks and the laws that require they sit further apart and elsewhere. Convening at the White House for a Republican Party event turned one of the seats of America’s divided government into a partisan wing of a partisan party. Checks and balances are the hallmark of America’s divided government, but last week was one more peek, not our first, into what power can look like unchecked and unbalanced. With the Border Patrol Union in illegal attendance, in uniform, there was no one to, you know, patrol borders.

There were checks and balances to be had, however, albeit not from rival branches of the US government. The illegal RNC speeches, music, and closing fireworks were checked and balanced by protesters who brought their own sound and light shows to the party. As RNC speaker after speaker spoke illegally at the White House, demonstrators gathered in Washington D.C. edged ever closer with drums, horns, and chants to project their collective noise onto the White House lawn, protesting the taking of their public thing. Their noise – a resounding No! — rose over the only substantial wall Trump has built during this presidency: the one that went up during the George Floyd protests this summer and now bunkers the White House.

The popular protest of sound was partnered with a popular protest of light. Just a few blocks away from the lawless scene at the South Lawn, the lintel of the entrance to the Trump Hotel shone with the digits 180,814, signifying the unholy number of American dead, so far, from the coronavirus pandemic. Light projection sends messages that hit home without violating private property protections. This kind of graffiti does not leave a trace and cannot be disallowed.

Trump’s RNC used light too. At the end of the evening’s ceremonies, fireworks went off and his name appeared in the sky. It was like the old Broadway producers’ promise: Just imagine! Your name, up in lights! And there it was: TRUMP, all caps, lit up in the sky. But this kind of graffiti does leave a trace. The letters burned themselves out, and then tumbled in embers, to the ground below. An Icarus of writing.

It is because such embers invariably fall to the ground, posing a possible risk of fire that fireworks over the Mall normally have to be approved by the government. The National Park Service approved the RNC application for fireworks a few days ago. It was one of several enablements that supported the illegalities of the RNC’s spectacle.

And that was the point, surely: the outrageous illegality of it all. The message? He is Unchained. Unbalanced. Unchecked. And in case anyone missed it, he announced it: “it’s not a House, it’s a home,” he said, meaning: it is not our House anymore, it is his home. Later Trump would point at the White House and say: “what’s the name of that building?”

“What’s in a name? That which we call a rose, By any other name would smell as sweet,” says Juliet in Shakespeare’s tragedy. But she is wrong. There is no denying the power of the name. 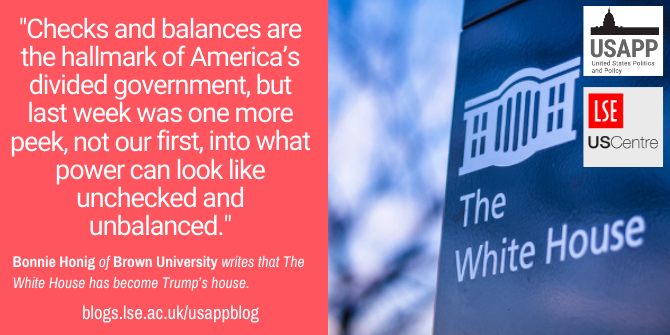 So too for us: Can it still be the White House once Trump emblazons it with his brand and makes himself at home there? Can the White House still be the building that symbolizes the revolution of a moment and the as yet unkept promise to repay the unpaid labor of American history?

More relevant still than Shakespeare, though, is Homer’s Odyssey, in which the palace of Odysseus is taken over by would-be rivals in his absence. Odysseus is away for years, first fighting the 10-year long Trojan War and then distracted for many years more by worldly delights and tricks as he takes the rather long way home. Summarizing Odysseus that way makes him sound a lot like a mythical version of the US, which has neglected its domestic obligations because too long at war and then too long distracted from democratic work by various adventures and delights.

The rivals who take Odysseus’ place in his absence are called the Suitors because they desire not only his wealth but also his wife. They are careless young men “arrogant and self-indulgent, making themselves at home” in a place that is not theirs, driven by a lust and waste so bottomless that they seem to prefigure Naomi Klein’s examples of neoliberal rapaciousness in The Shock Doctrine. But in Homer, if not in Klein, that rapaciousness extends misogynistically to wanting to take possession of Odysseus’ wife Penelope too.

Last week, Trump took the role of Homer’s Suitors, grabbed us all by the pussy and announced to us: it’s my home not your House and, by the way, when you’re President they let you do it. It’s incredible!

So he says, but even in the old days, sometimes those who were grabbed objected. In the old days, he would quiet objectors down with NDA’s, threats, denials, and payoffs. Now he sends troops into the streets, lobbing flash bombs, and threatens long prison sentences that will put the protestors behind Barrs, where they belong.

Earlier in the day, Joe Biden and Kamala Harris made public appearances to preview the case against Trump. Harris made note of the importance to her and to us of the sentence she would say when she appeared in Court as District Attorney. “Kamala Harris, for the people.” She suggested she was still “for the people” in this upcoming election. We need the representation! In Court, the point of that sentence is to de-personalize the proceedings, to make it about law or justice, not vengeance. Whatever the injustices of law in the US, and they are many, this idea that there is a public peace that needs to be voiced, a depersonalized public thing that needs to be personated in Court, is a powerful democratic idea.

Its opposite is Trump who personalizes and privatizes everything meant to be public and shared.

Public things, like the White House, diminish us as individuals with their grandeur and ennoble us as citizens. They call to us to be gathered by them into the kind of collectivities that energize democratic life. These are collectivities that go on strike in response to racial injustice, or march to protest the usurpation of a still aspirational democracy by dynasts and despots, or wear masks to prevent contagion from spreading to the vulnerable.

At the end of the evening, they played Hallelujah, a gorgeous song by Leonard Cohen, who is certainly turning in his grave right now to have his work used in this way and whose estate has since issued a strong rebuke for its use. The scene of the song is another palace, this one belongs to David, the flawed Biblical King of the Israelites who slew Goliath and lusted after Bathsheba. Another pussy-grabber with no boundaries.

Halellujah is a break-up song, though, so it may promise more than the RNC counted on when they booked it in the hope that it would enfold their dubious nominee in some messianic glow. But the glow is itself embered. As the song says: “It’s a cold and it’s a broken Hallelujah.”