Under both President Obama and Trump, Eastern Europe has faded from the foreign policy agenda of the United States. With the 2020 US presidential election around the corner, Cristian Nitoiu, Florin Pasatoiu and Loredana Simionov analyse the impact of a potential Trump or Biden administration on the region, with a focus on Romania. They write that depending on who wins the White House, the next four years may see a new focus on promoting US-style liberal values in Eastern Europe, or the continued fallout from US-antagonism towards China.

For many pundits, over the last four years, the foreign policy strategy of the United States has been confused and uncertain at best. That said, despite his erratic behavior when it comes to US domestic politics, Donald Trump has actually been more consistent in his foreign policy rhetoric if not in action, which seems to have brought a degree of stability in the international arena. That is, his tenure has not really experienced some of the upheavals and crucial events that in the last two decades have marked the perception of the decline of the liberal world order: e.g. the aftermath of the wars in Afghanistan and Iraq, the Russian-Georgian war of 2008, the Arab Spring or the Ukraine crisis.

Even more than in other parts of the world, Eastern Europe seems to be a prime example of US policy of engagement and disengagement at the same time. This trend predates the Trump administration and has its roots in Obama’s presidency. Contrasting policies such as the Asia Pivot or strengthening the so-called ‘Eastern front’ mark the profound dualism of US strategy in Eastern Europe. Most countries in the region view a strong transatlantic partnership as a sure way of keeping Russia at arm’s length and trade increased influence in the EU. However, this makes US commitment towards the region increasingly complacent as Eastern Europeans are perceived to seek to preserve their transatlantic partnership at all costs.

A key difference between the approaches of the US Democratic and Republican politicians to Eastern Europe seems to lie in the contrast between values promotion and security commitments. The Trump administration has disproportionately emphasised the latter, while the Democratic Party seems to be focused on achieving a certain level of ideological influence: especially when it comes to the promotion of liberal values such human rights, democracy, the rule of law and more recently social justice.

A second Trump presidency will probably mean more of the same for Eastern Europe. On the one hand, the strategy of both engagement and disengagement will lead to an enhanced military presence in the region. On the other, US foreign policy is bound to be to more concerned with deterring China. The withdrawal of US troops from Germany has already been translated into an increased military presence in Eastern European countries. Moreover, with the coronavirus crisis, the Trump administration has ramped up its antagonism towards China, with some voices even floating the idea of appeasing Putin’s Russia in a bid to stifle Beijing.

The Trump administration has also continued the isolationist trend that began during Obama’s presidency. It is likely that a Biden administration would spend considerable time and energy on internal matters in order to undo the perceived failures of the Trump administration. And the list in this regard is endless: from racism, immigration to social justice and gun policy. Even less attention will be paid to Eastern Europe. Countries in the region will he expected to show a commitment towards closer relations across the Atlantic not only when it comes to upholding the existing security architecture but also closely mimicking liberal values-led developments in the US, especially in the area of social and racial justice. However, this is likely to cause a considerable backlash as the majority of the population in Eastern Europe tends to be rather conservative.

Romania looks to the US, but the US isn’t looking back

Within Eastern Europe, Romania is one of the strongest stalwarts of transatlanticism. This is shown by the military presence of the US in the country, the one-sided public debate which generally promotes the transatlantic partnership, or the country’s tendency to favor US perspectives over EU priorities in world politics. Faced with the reality of US simultaneous engagement/disengagement strategy Romanian policymakers have chosen to turn on a blind eye to American disengagement from Eastern Europe.

Trump’s presidency has constantly put in doubt (at least in rhetoric) the level of US commitment. Considering this trend, Romanian policymakers have resorted to paying lip service to the Trump administration, while keeping their fingers crossed for a candidate from the Democratic Party to take the reins in White House from 2021. Romanian public and official discourse often emphasises that the strategic partnership is as strong as ever in spite of Trump.

The isolationist trend embraced by the Trump administration increasingly pushes small states around the world toward greater agency and autonomy as they are left to think and fend for themselves. While some countries in Eastern Europe like Poland, Hungary or Czechia have perceived this as an opportunity to enhance their ties with non-Western states such as China, India, Japan or Russia, Romania has stuck to its guns and declared its unwavering desire to develop a single direction in foreign policy: namely transatlanticism.

A future Joe Biden presidency will likely alleviate the fears of Romanian policymakers and further lock the country into the unchallenged orthodoxy of its current transatlantic partnership. Imitating internal trends and developments in the US will take precedence over safeguarding the security architecture. This process has already started with President Klaus Iohannis emphasising the need to study the genocide of the Roma community in Romanian schools. Moreover, Romania has been a key critical voice against Russia’s aggressive actions towards small states in Eastern Europe. Trump’s ambiguity in relation to Moscow has not been favorably received in Bucharest. A Biden administration is thus preferred as it is expected to clear the air and maintain a strong stance against Putin’s Russia. 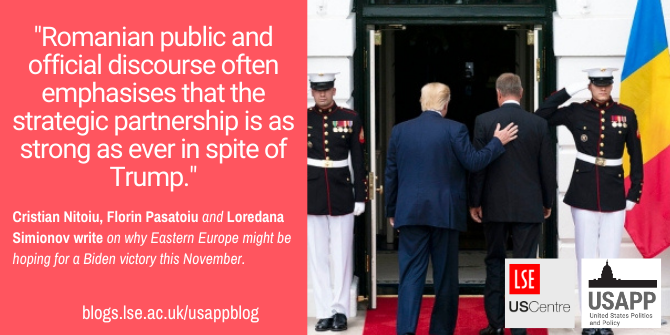 “President Trump Meets with the President of Romania” by The White House is Public Domain.

In contrast to Donald Trump, Biden has shown a greater desire to accommodate China. This will undoubtedly pose an important puzzle for Eastern European countries like Romania who have already expressed their unwillingness to cooperate with Beijing. Romania has stressed on multiple occasions that it cannot partner with China, as leaders in Beijing do not share transatlantic values. Earlier this year the country signed a memorandum with the US that bars non-transatlantic companies from participating in Romania’s 5G network. Moreover, the Romanian government recently backtracked on an agreement signed in 2015 which would have seen China’s General Nuclear Power Corporation construct two new reactors at the Cernavoda nuclear station.

While we can’t know who will win the White House this November, Romanian leaders, much like their peers throughout Eastern Europe, seem to be keeping their fingers crossed for future Biden administration. Such an outcome will, nevertheless, lead to a series of developments in Romania (and other Eastern European countries) which might not play well with the conservative leaning majority of the general public. A stronger stance on Russia will likely have to balance the more appeasing approach towards China proposed by Biden and the push to mimic domestic developments in the US.

Cristian Nitoiu – Loughborough University London
Cristian Nitoiu is an Associate Fellow at LSE IDEAS, a Lecturer in Diplomacy and International Governance at the Institute for Diplomacy and International Governance, (Loughborough University London). He is also co-Director of the Centre for Foreign Policy and Security Studies (CFPSS).