Trump’s hospitalization may do even more damage to the president’s already poor credibility on managing the COVID-19 pandemic.

Trump’s hospitalization may do even more damage to the president’s already poor credibility on managing the COVID-19 pandemic.

Last week, President Trump announced that he had tested positive for COVID-19 and was then hospitalized on Friday. In this Q&A, LSE US Centre Director Professor Peter Trubowitz writes on how Trump’s hospitalization may affect the election race, including this week’s Vice-Presidential debate and key US Senate races where Republicans are facing strong Democratic challengers.

How will Trump’s hospitalization impact the presidential race?

We are now in uncharted waters, but it is hard to see how any of this helps Trump in terms of the election. He has spent the last six months doing everything he can to move the national conversation away from the pandemic and his mismanagement of the crisis. Now the president is Exhibit A for the argument in favor of taking this seriously, and whatever empathy some voters feel for him, others will likely view this as a reminder of how careless and reckless the White House has been throughout the pandemic, downplaying the science and ignoring the experts. A Reuters-Ipsos poll taken after the president announced on Twitter that he has COVID-19 indicates that nearly two-thirds of those polled think Trump could have done more to avoid the virus, including 50 percent of Republicans. The president continues to trail Biden badly in the national polls (see here) and the overwhelming majority of voters have been telling pollsters that their minds are made up, and that nothing will change that. It is possible that some voters will have a Kumbaya moment and rally around the ailing President, but as they say in Texas, “don’t bet the ranch on it.”

What do you expect from the Trump campaign in the coming days?

I suspect the Trump campaign will pivot to the economy this week. This is the one and only policy area where Trump consistently outperforms Biden in the polls, even if last Friday’s lacklustre jobs report underscores just how fragile the economic recovery is today. I think Trump’s single best play at the moment is getting the stimulus package that the House passed last week on his desk to sign. This will mean caving into Democratic House Speaker Nancy Pelosi’s demands (she continues to have the stronger hand), but it will allow the president to say that even while he is convalescing, he is on the job for the American people. Trump can expect some resistance from Senate Republicans if he moves in this direction, but at the end of the day, they realize that if the president loses badly on November 3, he could well take a number of key Republicans seats with him and give the Democrats control of the Senate. That might even be too much for those Republican Senators with presidential ambitions of their own who are not up for re-election this year.

How might this impact Republicans in key Senate races?

I think a lot of down ballot Republicans are very worried right now, and for good reason. Biden is polling surprisingly well in states like Georgia, Texas, and Arizona that are typically a lock for Republicans. The Republicans find themselves at this stage of the 2020 campaign defending seven to nine Senate seats that are now competitive, while Democrats face a serious challenge in only two states (Alabama and Michigan). The Democrats need to net 4 seats total to take the Senate outright (three if Biden wins the presidency and Harris becomes the tie-breaking vote in the Senate). With a month to go, the Democrats are well positioned to pick up seats in Arizona, Colorado, and Maine and competitive in Iowa, Montana, and North and South Carolina. To be sure, a lot can change in these tight races in the coming weeks and the Democrats still have their work cut out for them. But if I’m Senate Minority Leader Chuck Schumer, I like where these races are a month out from an election.

What does this mean for the Vice Presidential debate on Wednesday?

Normally, the Vice Presidential debate receives relatively little attention, but I think Trump’s illness has elevated the stakes for both campaigns Wednesday night when Vice President Pence and California Senator Kamala Harris face off. Assuming the debate goes ahead as planned, Pence really has his work cut out for him for two reasons. First, he has been the administration’s point man on the virus since the start and given its mismanagement of the pandemic, Senator Harris will almost certainly press him on the administration’s performance and implicitly, Pence’s leadership as head of the White House Coronavirus Task Force. Second, given Trump’s medical condition, Pence needs to demonstrate to Americans that he’s ready to the step into the job should it come to that — that he’s not simply Trump’s yes man, which is how many Americans think of him. Harris also needs to show that she is ready for prime time: Biden is no spring chicken, after all. But I think when they debate on Wednesday night in Utah gets underway there will be more pressure on Pence. He’s the one that has to explain away the administration’s poor performance. 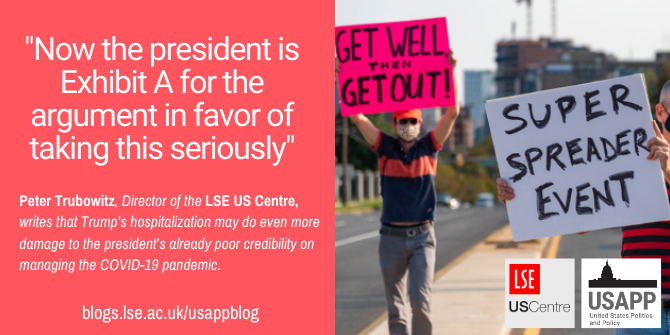 What are some of the big “known unknowns” politically at this moment?

There are many, but the two consuming Washington today are (1) when did the president contract the virus and (2) what impact will all of this have on the vote to fill the Supreme Court vacancy left by the recent passing of Ruth Bader Ginsburg. With respect to the first question, the issue is was the president traveling and holding political events last week knowing that he was infected with the virus? If so, it will sap what’s left of his badly damaged credibility with voters on responsibly managing the pandemic. With respect to the Supreme Court vacancy, there is now some chance that Republicans won’t have enough Senators present to win a vote on Trump’s Supreme Court nominee Amy Coney Barrett. Right now three Republican Senators, Sens. Ron Johnson (R-WI), Mike Lee (R-UT) and Thom Tillis (R-NC) have tested positive for COVID-19. If they are not present when the vote on Barrett is taken, and Sens. Susan Collins (R-ME) and Lisa Murkowski (R-AK) vote to reject her as promised, McConnell will either have to find some way to change the Senate rules or put the vote off until after the election, something he is desperately trying to avoid.

With Trump on the side-lines, what does the Biden campaign do?

Biden has to comport himself with compassion and grace in this situation and if there is anything we can expect from the former Vice President, it is his ability to show empathy. I think he will do all of that (and is), while also treating this as a “teachable moment,” reminding Americans to listen to the scientists and experts on matters having to do with health and safety. This will help draw out the contrast with Trump’s approach to the virus without having to run negative ads while the president is in the hospital. Right now, the main things the Biden campaign needs to do is keep the former Vice President and Harris healthy and safe, do what it can to fuel enthusiasm among progressive Democrats, and continue to focus its resources and time on the battleground states it must have in its electoral column to win the presidency.