Since he announced he was running for the presidency in 2015, Donald Trump has used social media, and Twitter in particular, to connect with voters and to promote himself like no previous US politician. Devin J. Christensen analyzed media coverage of over 2,500 of Donald Trump’s tweets and found that those with the most inflammatory language were more likely to be highlighted. He warns that social media’s lack of editorial standards means its current use as a primary outlet for political communication threatens the future of American democracy.

As Election Day approaches, Republican and Democratic politicians alike are turning to social media to engage with constituents they cannot meet in person. This seems like a no-brainer: most Americans already have social media accounts, and they have come to expect politicians to maintain active social media presences thanks to a precedent set by Donald Trump.

However, my fellow political science researchers, John A. Curiel and John Lovett, and I are concerned about social media as a platform for official political communication. For example, on Twitter, @RealDonaldTrump routinely pokes fun, calls names, postures, complains, makes fictitious announcements, and calls into question the validity of traditional news reporting. This behavior has eroded trust in the free press and threatens to damage American democracy.

When we think about democracy, we think about more than just elections. Democracy is a complex web of adversarial institutions that split and balance authority to ensure no one person or group gains too much power. One such institution is the free press, which reports on leaders’ behavior in office and allows citizens to hold elected officials accountable for that behavior in the ballot box.

Unfortunately, the press’s role in protecting democratic norms is complicated by market competition. Ratings are determined by viewership, and viewership in turn is determined by media producers’ ability to supply news that Americans want to watch. And Americans want to watch fights. Combative or polarizing content, like Trump’s tweets, are uniquely attractive news pieces: broadcasters on the right distribute these outrageous tweets to a Republican audience eager to agree with them, while broadcasters on the left present the same messages to their Democratic viewers as evidence of Trump’s unfitness for office. This partisan delivery of news content in turn leads to lower political knowledge, increased polarization, and decreased political engagement.

Consequently, Trump’s most inflammatory messages receive the most media attention. We confirmed this result by downloading all 2,546 of Trump’s tweets during his first year in office and inspecting them for polarizing, disrespectful, and misleading content. We then collected 46,066 full-text transcripts from all major broadcast news in the United States during the same time period, plus news-like infotainment programs like Trump’s favorite, Fox & Friends. Finally, we used statistical tools to compare the content of the broadcast transcripts against Trump’s tweets. We found that tweets with the most inflammatory language appeared in the transcripts more often, in more complete form, and more quickly than less inflammatory messages.

Over the past four years, this hasty proliferation of Trump’s most damaging tweets have caused many to lose trust in traditional media reporting. In 2017, George W. Bush remarked that the media is “indispensable to democracy.” Now, just three years later, the Republican National Convention has rallied behind Trump’s rhetoric and even adopted a platform resolution calling into question the validity of American news reporting. 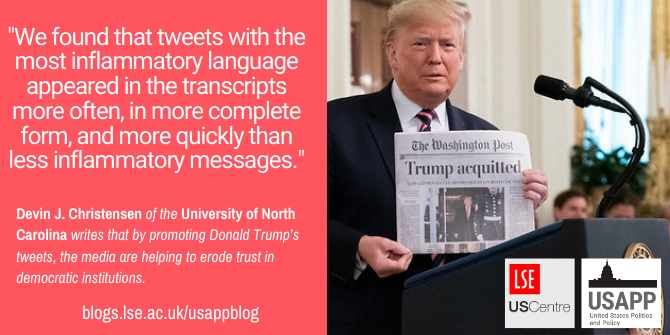 This loss of trust in the free press has triggered a “Twitter turn,” where citizens increasingly rely upon social media as a primary news source. However, these platforms lack the editorial standards which form the basis of traditional news media’s role in protecting democracy. Twitter and Facebook have demonstrably inconsistent censorship practices. Elected officials block followers in order to suppress critical commentary, a violation of First Amendment rights. And, social media platforms are more vulnerable to misinformation and foreign interference. For these reasons, adopting social media as a primary outlet for political communication threatens the future of American democracy.

What we can do about the Twitter turn? We could insist that the media stop transmitting damaging social media messages, but unless consumer tastes change, profit-seeking media companies have no incentive to change their ways. Another option would be to educate citizens about the risks of relying on social media as a source of political information. Unfortunately, Trump’s efforts to delegitimize the mainstream media have been so successful that many citizens will see any such claims as only more fake news.

Social media is here to stay, so our best bet is to think of ways to make social media a more reliable source of news. We can start by correcting what we already know is wrong with platforms like Twitter and Facebook by making community standards known, applying them uniformly across all accounts, and publicizing crackdowns on fake accounts and foreign influence. If we’re going to be hearing from politicians on Twitter, we can at least demand that their statements adhere to a minimal standard of civility and truthfulness. The future health of the American democratic experiment may depend up on it.