In new survey research, Andreas E. Murr and Michael S. Lewis-Beck asked people in each of the 50 states and Washington DC who they thought would win their state in the presidential election. Adding up their raw data, their survey suggests that President Trump will win re-election next week with 320 electoral votes to 218 for former Vice President, Democrat Joe Biden.

There are a number of ways that political scientists and those who watch elections can predict who might win an election. Citizen forecasting uses voter expectations to make these predictions. The method has a strong track record of accurate election forecasts for national elections in the United Kingdom and the United States. Recently we published citizen forecasts for the 2020 United States presidential election, drawing on unique survey data gathered in each of the American states, thus allowing direct prediction of Electoral College results.

In July, these vote expectation polls asked a state question, “Which candidate for president do you think will win this state?” The sample was made up of 2,483 respondents in Amazon Mechanical Turk (MTurk). This research design enables us to report directly a prediction for each state, indicating a candidate win when 50 percent-plus of the state respondents name that candidate. For instance, in Delaware, the Democratic nominee, Joe Biden’s home state, 77 percent of the respondents said he “will win”, while in the red state of Oklahoma, President Trump scored 87 percent.

When these July state-by-state predictions are aggregated, what is the estimated distribution of votes in the Electoral College?

Simply using the raw data by adding up the 50 percent-plus states for Biden, we see that he would garner 204 electoral votes, compared to 334 for Trump.

Given the first time, experimental nature of our study, not to mention the July time frame, we thought that it would be valuable to run our survey again. Thus, in October we re-ran the study, which yielded a fresh sample of 2,352 across the 50 states plus Washington DC.

When these October state-by-state predictions are aggregated, what is the estimated distribution of votes in the Electoral College?

Looking again at the raw data by adding up the 50 percent-plus states for Biden, we see that he would garner 218 electoral votes, compared to 320 for Trump. In other words, the results appear essentially the same, with Trump holding a 100 plus vote lead over Biden. 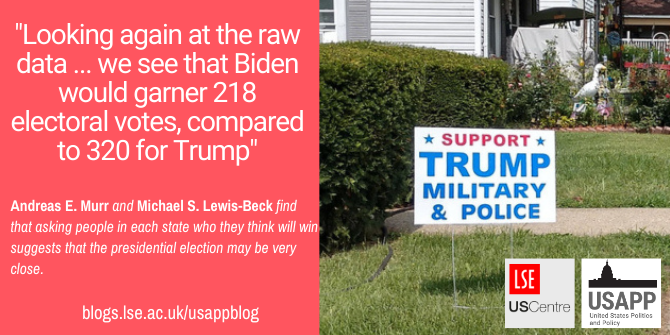 How certain are these results?

Of course, they have a degree of uncertainty, and Donald Trump may not emerge as the winner. Undoubtedly, the concern in the mind of many readers relates to the quality of the MTurk samples, especially as they appear to differ from leading vote intention polls. We have explored this possibility and can point out, among others, the following assessments. First, there are no July respondents in the October sample. Second, we collected the same information using the same criteria as in July. Third, we were able to reject the possibility that states are simply forecasted randomly. Fourth, we computed the proportion of people who forecast the same for the state and nation and compared it between MTurk and American National Election Studies (ANES) samples. The historical ANES average is 73 percent, the same as the MTurk value in October. Fifth, we looked at the average level of political interest among respondents along a three-point scale; in July it was 2.5, in October, 2.6.

Sixth and last, but not least, we compared the national forecast between MTurk and YouGov in October: of the MTurk sample 49.7 percent said Biden would win; in a recent The Economist/YouGov poll (12 October) 50.6 percent said Biden would win the popular vote (with a margin of error plus or minus 4 percent). Hence our results are in line, at least at the national level, with a reputable poll. While these assessments by no means provide a definitive answer to the quality question, they do imply some degree of data reliability.

Taken together, these two citizen forecasting exercises in the American states, in both July and October, unprecedented as they are, suggest, at minimum, that the race is close. Voters would do well to take note.