The race for the White House has implications that extend far beyond the United States. Anthony Salamone writes that, while relatively neglected, the US-Scotland relationship is an important aspect of the latter’s growing debate on its own role in the world. He argues that, whether Scotland becomes independent or remains part of the UK, it would be prudent for the nation to invest more in US-Scotland relations.

The fast-approaching US presidential election will be a decisive moment in the American democratic story; it will also have significant global ramifications. A Joe Biden administration would be very different from a second term for Trump in almost all its policy measures, and foreign policy would be no different. This difference is now even more important with the emergence of consistent majority support for Scottish independence and its effects on the debate on Scotland’s role in the world. Bilateral relations with the United States are an important part of this, and the new US president will matter to Scotland.

US-Scotland relations and the presidential election

Scotland and the US share close political, economic, social and cultural connections. The next US administration will have a notable impact on how they will continue to develop. Managing the US-Scotland relationship requires Edinburgh to navigate challenging political circumstances. The Scottish and UK Governments have markedly different approaches to EU and international affairs. Scotland consistently rejected Brexit, and the Scottish Government is decidedly ill at ease with the tenor of the UK Government’s ‘Global Britain’ foreign policy. The scope for cooperation between them in these areas is therefore much reduced.

The Scottish Government also disagrees with positions taken by the Trump administration on Brexit, the EU, US foreign policy and US internal affairs. Donald Trump has Scottish roots: his mother emigrated to the US from Scotland. He could ostensibly be entitled to Scottish citizenship under independence. Such connections to the president of the United States should be diplomatic gold for Scotland, leading to possibilities of access, interest and support. In reality, with their differences, the official relationship between Trump and Scottish political leaders is confrontational. Should he secure a second term, such divisions would continue and potentially intensify. These dynamics are not favourable for building US-Scotland relations.

By contrast, the Scottish Government would likely support positions taken by a Biden presidency on these same issues. Joe Biden often references his Irish roots and his early years in Pennsylvania. Given his favourable disposition towards Ireland, it is an open question whether as president he could likewise be receptive to Scotland. Although the US-Scotland relationship will be influenced by political personalities, it should not become defined by them. The focus for Scotland should be to nurture long-term links which can develop whatever governments hold power in Washington or Edinburgh.

The US response to future Scottish independence

Were Scotland to become independent, relations between Scotland and the US would be transformed. During the transition to statehood, the main challenge for Edinburgh would be to demonstrate that Scotland would remain a stable and reliable partner, not become a further source of instability in global affairs. The impact of Scottish independence on transatlantic relations would surely be a focal point for the US, including Scotland’s future relationships with the European Union and NATO.

The view of the US Government would be vital to Scotland. To achieve effective independence, Scotland would need the United States to recognise it as a state at the point of independence. Formal diplomatic relations with the US would be essential in their own right, including related access to the American economy and financial markets. Moreover, many other countries would look to the US in deciding their own approach on Scotland. US support would also be needed for Scotland to join the UN and numerous other international organisations. 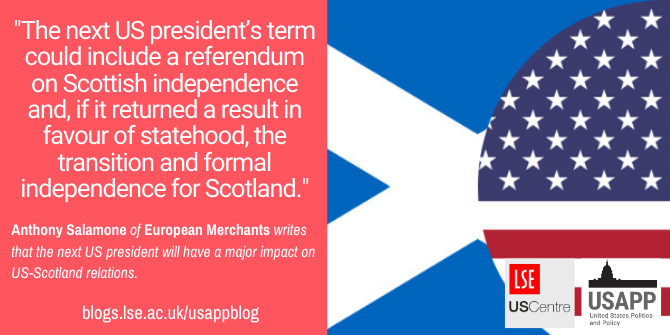 Decisions on state recognition are the prerogative of the Executive Branch. Trump is largely unpredictable, rarely guided by discernible policy principles. It is impossible to envisage to any reasonable degree how he would respond to Scottish independence. Decisions related to Scotland made under a renewed Trump administration could be reversed at any time without warning or reasoning. Biden would be far more likely to base decisions on a clearly defined set of principles for America’s role in the world and its global outlook. Provided independence was achieved through a democratic process agreed with the UK, it would seem probable that a Biden administration would recognise Scotland as a state.

The next US president’s term could include a referendum on Scottish independence and, if it returned a result in favour of statehood, the transition and formal independence for Scotland. It would matter to Edinburgh who occupied the White House.

In recent years, Scotland’s public debate on European and international relations has become overwhelmingly focused on Brexit and the EU. While that development is understandable, the relationship between Scotland and the US is also important, in its own way. A common idea has emerged that Scotland has to choose between close links with the EU or the US – whereas, in reality, it needs strong relationships with both. The discourse on Scotland becoming part of a trade agreement with the US is also highly negative, which is clearly not conducive to furthering bilateral relations.

Regardless of its constitutional future, it would be prudent for the Scottish side to invest more attention, thought and energy in the US-Scotland relationship. The priorities should be to build deeper political connections; increase the role of US-Scottish relations in the public spheres; and foster new mutually beneficial partnerships across government, business and civil society in both countries. US-Scotland relations must be fully insulated from the Scottish independence debate, else their practical value will be limited.

This year’s race for the White House demonstrates that – particularly under independence, though also as part of the UK – Scotland has to respond to external events and circumstances which are not within its control, but nevertheless have substantial impacts on Scottish society. To maximise its connectivity and influence, Scotland should take the initiative, develop the Scottish caucus in the US and advance the US-Scotland bilateral relationship.