Despite the importance of national elections, many Americans see little value in voting. Tsjalle van der Burg, Lara Carminati and Celeste Wilderom use economic theory to argue that the potential benefits of voting always outweigh the costs to an individual. They write that while the likelihood that any one vote might make a difference is very small, if a voter feels that their candidate is better for the country’s national income over the next four years, that potential benefit will outweigh any cost of voting.

Despite record turnout in the 2020 presidential election, millions of Americans still did not vote. And while many of those may have been unable to cast a ballot, a large number likely did not participate in the democratic process because they may have believed that their vote had little value. Despite this likelihood, in our view, it is perfectly rational to vote, since having just a very small chance to make a very big impact is worth much more than the costs of going to the polls. We argue that, in the end, it’s a simple economic calculation.

But let us first sketch the problem. To begin with, the chance that one vote can make the difference is indeed very small. In the 2008 presidential elections, for an average US citizen the chance that their vote made the difference was approximately one in 60 million. We take it that chances were (approximately) the same in the 2020 elections, which is what we examined.

Going to the polls involves costs, among other things, the time spent to vote. We take the costs to be $10 for bringing out each vote (other estimates will not change the conclusions). Now, do the benefits of voting outweigh the costs?

Consider a selfish voter. They can choose between two candidates, A and C. The voter thinks that if A is elected, their net income will increase by $60,000 – quite a high figure. Now, for a voter it is reasonable to think that the value of their vote is equal to the expected value of its benefits, at least in the first instance. The expected value would be $60,000 divided by 60 million in our example, or one-tenth of a cent. Since the costs of voting are higher, voting is irrational. A similar conclusion was drawn in earlier research for all selfish citizens, and we don’t disagree.

Voting should be rewarding if you care about your country

For a voter who cares for their Country, however, the situation is different. To explain this, we turn to citizen Jones. Jones cares for the US. He believes that, if A is elected, national income will be higher than if C is elected. Imagine Jones thinking the difference will be equal to one percent of national income over the next four years. This would mean that electing A instead of C would improve national income by about $900 billion. So, if Jones’ vote for A were to make the difference, the benefits to the US of this vote would be $900 billion.

The expected value of the benefits of Jones’ vote is then $900 billion divided by 60 million, which equals $15,000. This is much more than the costs of voting. Therefore, it is rational for Jones to vote. Others have drawn similar conclusions for other voters who care for their Country.

However, this conclusion is not yet fully convincing. The fact remains that it is certain that the costs of voting are $10. It is not certain that the vote will have any effect. The chance that it has no effect is even 99.9999984 percent. Indeed, as it is ‘quasi-certain’ that it makes no difference, it therefore would be rational not to vote.

Using economic theory to determine the benefits of voting

In our view, the debate can be settled by applying some solid insights from portfolio theory and cost-benefit analysis, which are generally accepted among economists. One of these insights is that a decision-maker should take both the expected value of the effects of their decision and the related risks into account.

Portfolio theory also offers another insight: we don’t need to worry about risks if we take steps to cancel them out through the decisions we make. For example, if an investment in Volkswagen shares is risky because there is a chance that Volkswagen will no longer be able to compete with Ford in the future, and if an investment in Ford is risky because there also is a chance that Ford will no longer be able to compete with Volkswagen, then an investor who invests in both companies can neglect these individual risks. After all, when the Volkswagen shares go down because its customers turn to Ford, the Ford shares go up, and vice versa, so that the returns to the portfolio remain the same. 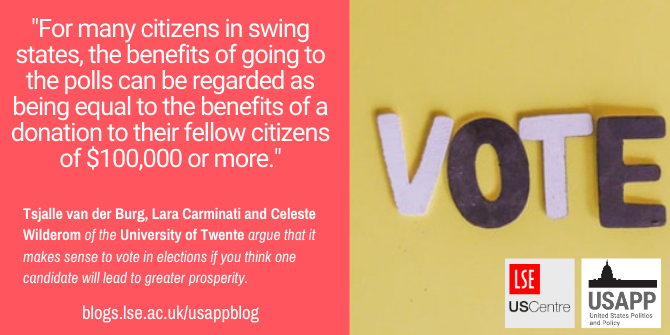 Photo by Glen Carrie on Unsplash

Let us go back to our citizen Jones. Jones cares for his Country. In other words, Jones wants the effects of the large portfolio of all actions, projects and policies that affect US national income to be favourable. When Jones casts his vote, this is just a small action that is part of the large portfolio. Whether the vote is decisive, depends on sheer luck. According to the theory, this implies that the risk that Jones’ vote has no effect is cancelled out against the risks of all the other actions, projects and policies in the portfolio. Therefore, Jones can base his decision on the expected value of the effect of the vote, only. That implies that they should vote.

Let us turn to voters in swing states. The chance that a single vote in a crucial swing state will be decisive can be in the order of one in nine million. There will be many citizens who think the election of their preferred candidate will increase US national income by one percent or more. If the increase is one percent exactly and if the chance of being decisive is one in nine million, the expected value of the effects of each vote on national income will be $900 billion divided by nine million, or $100,000. Since the large risk that the actual effect of the vote differs from the expected value can be neglected because it cancels out in the aggregate, we come to the following conclusion: for many citizens in swing states, the benefits of going to the polls can be regarded as being equal to the benefits of a donation to their fellow citizens of $100,000 or more. Compared to this, the costs of voting are (very) small.

In states like California the chance of one vote being decisive is much lower; it can be one in 600 million. But even with such a low chance, a citizen who believes that the candidate of choice will increase national income by one percent, has a good reason to vote. In that case, the benefits from a single vote can be valued at $900 billion divided by 600 million: $1,500.

Thus, if you reckon that a candidate or party is significantly better for our country than the other one, it is perfectly rational to exercise your right to vote, even though it is only one vote.

Tsjalle van der Burg – University of Twente, Netherlands
Tsjalle van der Burg is an Assistant Professor in Economics at the University of Twente, Netherlands. He is the author of the book “Project Appraisal and Macroeconomic Policy” (1996, with a foreword by Kenneth F. Wallis). This book deals with the question of how to analyse the macroeconomic effects of (very) small projects.