When Joe Biden enters the White House in January, he will have the ability to reset an economic model that has failed to deliver prosperity for millions of Americans for decades. John Van Reenen calls for the creation of a Grand Innovation Challenge Fund that would see a large increase in Federal funding for research and development to fuel technological innovation to raise productivity growth.

The task the new Biden-Harris administration faces when it takes office on January 20th are formidable. But it is also exciting: an opportunity to re-set the model that has failed to deliver inclusive prosperity to the American middle classes.

To my mind, the major long-run problem is stagnant wage growth for the typical US worker, as shown by the pink line in Figure 1. Median hourly wages have barely risen in real terms for nigh-on four decades — and, for less educated men, they have actually fallen. As a result, generations of Americans feel they will be no better or even worse off than their parents. 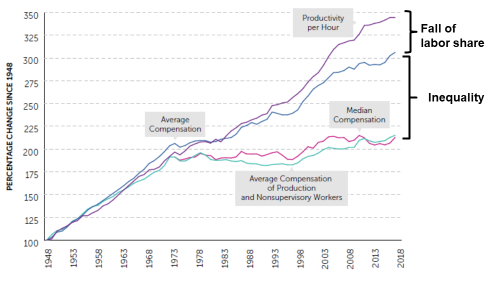 These are the structural economic conditions that fueled the rise of populism and helped sweep Trump to power four years ago. We need to craft policies and institutions to help return to sustainable wage growth.

But why has pay been so poor? The direct causes are easy to identify:

I am going to focus on policies to raise productivity growth – the first part of the fundamental problem, building on a Hamilton Project proposal I released earlier this year, arguing for a step change in Federal funding for technological innovation. I called this a Grand Innovation Challenge Fund.

Why focus on growth? Of course, we also need policies for redistribution such as a substantial increase in the minimum wage and the earned income tax credit (EITC), a massive increase in skills and training and an overhaul of the tax system. However, whatever happens in the Senate run-off elections in Georgia this January, policy change will require some minimum degree of bipartisanship. It is easier to get a coalition around growth policies than for pure redistribution.

Further, I believe there are many growth policies that are also directly good for tackling inequality, and I will mention some below.

The good news is that we have abundant empirical evidence that faster technological innovation boosts productivity growth. The bad news is that we also know the private sector will not provide enough R&D if left to itself. This is primarily because of knowledge spillovers – the firms who perform R&D only capture a small fraction of its ultimate benefits. This means firms do not have enough incentives to invest in innovation from society’s point of view, especially more basic R&D which has less clear commercial applications. My recent work with Stanford’s Nick Bloom and CRAI’s Brian Lucking finds that the social returns to a dollar of R&D are about three times the benefits of the private returns. 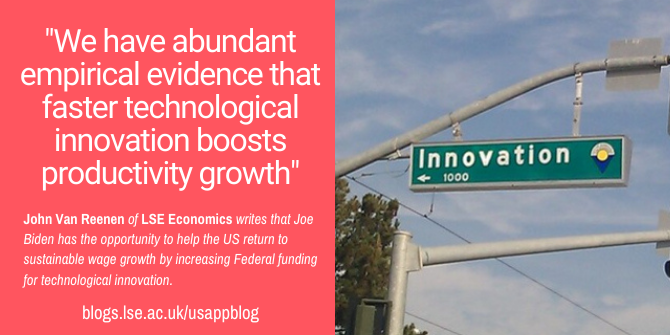 “Innovation Drive” by Christian Heilmann is licensed under CC BY 2.0

Much of federal R&D goes on basic, high spillover research, but as Figure 2 shows the sad truth is that government funded research has collapsed as a proportion of national income. It has fallen from almost 1.9 percent in the mid-1960s to under 0.7 percent today. Moreover, although business funded R&D has increased, the fraction of this going on basic research has also dwindled.

My Hamilton Proposal suggests an ambition to increase federal funding for innovation gradually by about 0.5 percent of GDP or about $100 billion. This is large, but it bridges less than half the gap with the mid-1960s.

More important than the exact amount, is which innovation policies are chosen. In recent work with Heidi Williams, we surveyed the deep reservoir of empirical evidence accumulated in recent years on such policies.

The evidence shows that, when well designed, R&D tax incentives have positive causal effects on innovation, as do direct grants through agencies such as the National Institutes of Health, and the Department of Defense. Forward commitments and prizes have also proven to be successful (e.g. on vaccines). I would put about half of the funds here.

The downside, however, of these “demand side” policies is that they may drive up the cost of R&D. Therefore, they need backing up by strong supply side policies to increase the quantity and quality of potential inventors.

Here are at least three effective supply side policies. First, boost the size of the science, technology, engineering and mathematics (STEM) workforce through more resources for studying science and pursuing a STEM career. Second, increased skilled immigration is a no-brainer. This has the advantage of being cheap and quick to implement. So, although political unpopular in some quarters, immigration is worth fighting for.

Finally, America loses many talented potential inventors, because kids from low-income backgrounds, minorities and women often face huge barriers to becoming innovators. Raj Chetty and I have labelled this the “Lost Einstein” or “Lost Marie Curie” effect (Figure 3). For example, Kids whose parents were in the richest 1 percent of the income distribution were ten times as likely to grow up to be inventors as kids in the bottom 50 percent. Only a small minority of this gap can be explained by early ability on things like math test scores. A lot more is to do with the fact that growing up in a poor neighborhood means that you are often not exposed even to the possibility of becoming an inventor or entrepreneur.

Figure 3 – Lost Einsteins? Kids born into richest 1% of parents are ten times more likely to grow up to be inventors than kids born into bottom 50% 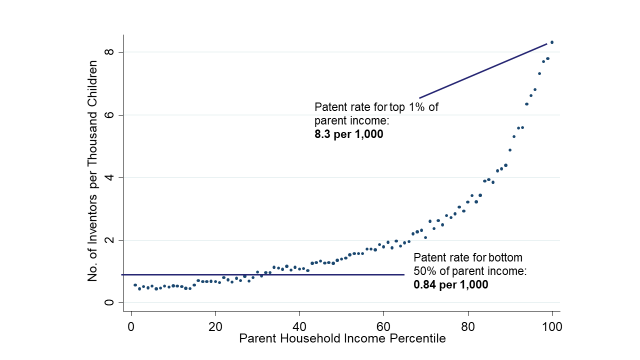 Supply side policies to find the Lost Einsteins and Marie Curies are not only a matter of social justice. By boosting the supply side, we reduce both inequality and improve growth prospects. There is no quick fix to this, but there are many possibilities: Gifted and Talented programs in public schools focused on disadvantaged kids who show early promise; restoring the National Science and Mathematics Access to Retain Talent (SMART) student grants – $10,000 per year for underrepresented minorities to study STEM at college and support initiatives by pioneering foundations such as Conrad and Lemelson. All need more rigorous evaluation, but all show promise.

Can we afford the Grand Innovation Challenge in the light of COVID-19?

I wrote the proposal Before Covid, so the question arises whether we can afford it? However, the real question is can we afford not to? Borrowing to invest in innovation has an excellent social Return on Investment.

The Innovation Fund is only one part of a portfolio of policies to deal with the malaise. Other policies towards productivity such as investing in infrastructure, skills and management are also important.

History teaches that crises can be moments of great political and social change. We are at such a historical conjuncture when reset button can be hit on the model of growth. After the Second World War, the West re-invented itself; we realized our deep interdependence and the necessity of investing substantially in what Vannevar Bush called (in 1945) the Endless Frontier of science.

The challenges of security, health and the environment are no less pressing now than they were then. We need an equally ambitious response.