In the 2020 presidential election, the Libertarian Party candidate, Jo Jorgensen, gained 1.2 percent of the vote, less than half the party’s 2016 election result. Jeffrey Michels and Olivier Lewis write that despite signs that pointed towards the potential for libertarian voters to be king makers in the 2020 election, their dislike of Donald Trump turned many to Joe Biden and the Democratic Party.

In the 2016 US Presidential election, the former Republican Governor of New Mexico, Gary Johnson gained 3.3 percent of the national vote share, the highest on record for a Libertarian Party presidential candidate. This modest milestone could have been written off as the result of a race featuring two highly unpopular mainstream candidates, Donald Trump and former Secretary of State, Hillary Clinton. But it might also have portended a more meaningful movement in US electoral politics, one in which a growing Libertarian Party – or at least an increasingly independent bloc of libertarian voters – gains the critical mass to tip the race. In fiercely competitive bipartisan contests, protests voters could position themselves as power brokers.

The Libertarian Party and the 2020 election

When we entertained this possibility during the primary season, plenty of signs were pointing to another strong result for the Libertarian Party. The frontrunners of the Democratic Party primaries were relatively radical candidates like Senators Elizabeth Warren and Bernie Sanders, who were proposing a new push of state intervention in the economy – anathema of course to libertarian ideology.  Meanwhile, Trump’s dominance of the Republic Party was unquestioned, blocking any attempt to move the party away from the incumbent’s brand of blunt nativism. And the one Republican House Representative, Justin Amash, who did dare question this dominance  – and in doing so became a minor cult hero  – threw in his hat for the Libertarian Party ticket.

But then, a lot changed. Democrats rallied behind moderate former Vice-President Joe Biden, while Libertarians chose Jo Jorgensen, a familiar face within the party but a stranger beyond it. The COVID-19 pandemic then rendered impossible the in-person canvassing necessary to raise Jorgensen’s profile. And it left little place for libertarian discourse in public debate. In the run up to the election, the question was not whether government intervention was justifiable, but rather how much and what kind was needed.

As a result, in Libertarian candidates finished with just under 1.2 percent of the vote in the 2020 election, losing nearly two-thirds of their share compared to 2016.

Did the 2020 ‘setback’ confirm that the Libertarian spike of 2016 was not a sign but a fluke? Looking at the bigger picture, was it rash to consider that libertarian voters could become kingmakers in US Presidential elections?

Libertarians were not 2020 spoilers

One straightforward response was put forth immediately after the election by commentators and politicians who argued that the Libertarian Party nonetheless decided the election, “spoiling” a Republican victory. Despite underperforming relative to the previous election, Jo Jorgenson’s ticket still was the second-best result in Libertarian Party history, and it was enough to cover the difference between Trump and Biden in several swing states.

This “spoiler” argument rests on the false assumption that voters of the Libertarian Party, and more generally voters whose identification with libertarian values rivals their loyalty to any particular party, belong, in the end, to the GOP. It was precisely the extent to which this assumption was false that provides a key to answering the questions set out above. The Republican Party showed in 2016 that its turn to Trump could cost it a large portion of voters to a Libertarian Party protest ticket. Doubling down on Trump in 2020, the GOP proved it could push the lion’s share of these same voters into the enemy camp, assuring its defeat. 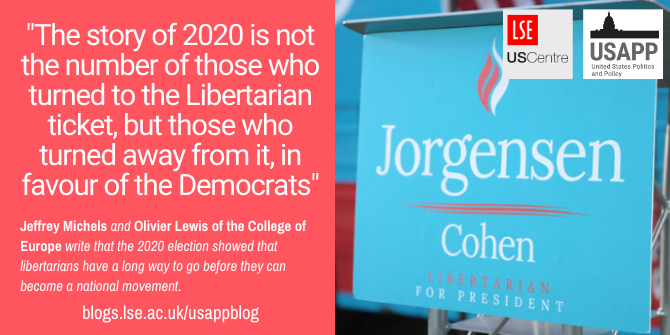 Indeed, the story of 2020 is not the number of those who turned to the Libertarian ticket, but those who turned away from it, in favour of the Democrats. Among the eight million people who voted for a third-party candidate in 2016 (half of which voted for the Libertarian Party), an overwhelming majority sided with Biden in 2020. The main indicator is that while Trump’s 2020 results are similar to those of 2016, Biden’s are much better than Clinton’s in 2016. Some of these not-Clinton-but-yes-Biden voters might be new voters or former Republicans, but exit poll surveys corroborate the hypothesis that a significant number of 2016 Libertarian voters opted for Biden in 2020.

They did this despite the fact that Joe Biden’s career record and electoral campaign still presented a number of red flags for libertarians. Most notably, he proposed what could be become the most ambitious plan of government spending in decades. But these concerns were evidently outweighed by the prospect of another four years of a Trump presidency. “If there is any libertarian case for Biden,” as one libertarian commentator put it, “it’s situational, and that situation ends on January 20”.

Where will Libertarian voters go now?

The 2020 elections showed then that the bloc from 2016 is still there and is still important, but that its potential to determine elections comes from swinging from one party to another instead of settling on and leveraging its own.

Unfortunately for libertarian-minded voters, this leaves them with only relatively poor options in future elections. There is a possibility that many of them will turn back to the Republican Party once it puts forth a less offensive candidate. But the GOP will likely remain in thrall of the bloc that Trump forged, a bitter reality for libertarians who just a decade ago seemed to take the reins with the success of the Tea Party movement. The Democratic Party will surely keep some of the votes it won from this bloc as well.  But the pressure to placate its far-left wing will likely outweigh its desire to permanently win over the moderate libertarians. And for the Libertarian Party to be anything more than a last resort, it would have to prove itself capable of exactly that which it failed to do this election: rally this bloc under a common banner with a shared strategy, in so doing convincing mainstream parties that it cannot be ignored.

In the next Presidential election, the bloc’s votes will likely be divided between these three options, weakening the efficacy of each and likely stoking a fourth option: abstention.

There is a paradox that limits the bloc’s potential. The same characteristics that predispose libertarians to be swing voters – their pride in rational, independent behaviour, and their resistance to organised politics, if not outright anarchism – also makes them unlikely to coordinate their action on a large scale to optimally leverage this position. Perhaps they could rally together through another groundswell movement like the Tea Party, not a totally fantastic scenario considering that resistance to government spending and restriction of civil liberties will surely mount as Covid-19 recedes. But could this feed into an independent force that would “break the two-party doom loop,” without being co-opted by the general anti-establishment rage buoying the Republican Party?

The need to stay small – for now

Instead, Libertarian Party and independent libertarian voters will have to settle for getting creative and picking smaller strategically placed battles. We have already observed this in the elections for Senate, where libertarian candidates in Georgia helped to force two run-offs, the results of which will decide the majority. The run-offs are still mostly a ‘lose-lose’ for libertarians, but there is surely a thrill in throwing a spanner in the workings of the major parties, especially if this incites the opposition to offer more libertarian policies. As Libertarian candidate in Georgia Shane Hazel noted: “I hope people understand that creating a run-off should be the primary mission until the party is much stronger”.

Of course, the Libertarian Party can also ‘think global, act local’. In Wyoming, Marshall Burt became the first Libertarian to win a statehouse seat since 2002, and the fifth in US history. Via its “Frontier Project”, the Libertarian Party hopes to win a few more state-level seats in North and South Dakota, Montana, Utah, and Wisconsin. There is also the possibility of winning more specific, less party-political ballots, via referendums. In 2020, many referendums passed seemingly libertarian proposals on drugs, taxes, rent, voting rights, ranked-choice voting, and labour regulations. Californian referendums are a prime example of this, but Alaska and Colorado are also interesting cases.

The question of whether the Libertarian Party or a bloc of libertarian voters emerges as a swing factor and ‘kingmaker’ in future US elections will depend on the success of a project to carve a common identity and settle on a shared strategy. They could do this autonomously with their own party or by fitting into a space left by one of the mainstream parties. But neither scenario appears likely in the short-term, meaning the battle for libertarian values will likely be waged where it has been waged best, far from the centre of the biggest electoral stage.

December 23rd, 2020|2020 What Happened?, Elections and party politics across the US, Jeffrey Michels, Olivier Lewis|6 Comments
Previous post Next post