Modern constitutions often include strong executives to contend with national emergencies. But what if the executive is the emergency?

Our Constitution, like many of the other national constitutions written after it, has mechanisms for accountability—including the impeachment process that was invoked in 2019-20 following President Trump’s efforts to enlist a foreign power to smear his political opponent in an election. The accountability mechanisms are designedly slow and deliberate.

But emergencies require speed and action—qualities we purposely invest in executives, not legislatures. And executive power is always in being. The person who is president sleeps, but executive power never does, as vividly illustrated in modern times by the sentinel outside the presidential bedroom who holds the nuclear codes. Congress, by contrast, often suspends its business and periodically goes on recess.

Nevertheless, Congress has the tools to meet this moment.

An emergency government plan for Congress

The final two weeks of the interregnum before the inauguration of our president-elect are a time of genuine peril for the United States. It may be, as some optimistic observers have suggested, that President Trump will not attempt to take any other anti-democratic actions in his remaining days in office—but we have no guarantee of that. We don’t know how he might abuse the presidential pardon power in his remaining days in office. We don’t know what else, in moments of pique and pettiness, he might attempt. We don’t know how he might choose to use the social media outlets that remain available to him. Moreover, it is hard to believe that he will be attending to the responsibilities of the office that require attention—not least those relating to the pandemic that is reaching terrible new milestones.

And our most optimistic hopes have been obviously dashed by Trump’s incitement at his rally this past week and the insurrection that followed.

So, it is imperative that Congress use all of the power at its disposal to generate an emergency government. Here are many of its resources: 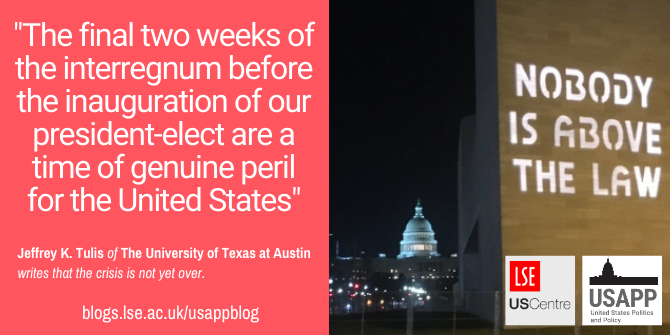 President-Elect Biden has made clear that he does not want to be involved in impeachment proceedings. He wants to devote his full attention to his transition, to standing up a new administration on January 20, and on making good on his commitment to bring the nation together. All the more reason why Congress needs to lead now, on its own, and ideally with some Republican support.

Pence needs to step up. And Pelosi and Congress as a whole need to stay on the job.