OVID-19 vaccination presents a picture of inequality: about 51% of the world’s vaccines are in the hands of 14% of the global population. Between and within countries, the distribution of vaccines has reflected existing racial and socioeconomic hierarchies rather than allocations that would maximise collective social welfare. Many countries see this as a contest. As a result, ‘winners’ order many more vaccines than they need, leading to reduced supplies and higher prices for everyone else. Miqdad Asaria and Joan Costa-Font explain why this doesn’t make sense from a health security point of view and is likely to backfire economically.

Ongoing COVID-19 vaccination strategies make it seem that the vaccines have been designed and implemented as treatments for individuals, much like pharmaceutical treatments for non-communicable diseases, rather than public goods to achieve the collective goal of eliminating the virus in the population. This makes sense from the profit-maximising perspective of pharmaceutical companies, as well as from the perspective of individuals desperately looking for ways to protect themselves from the virus during the pandemic, as described in this recent review. However, from a societal standpoint, it is an expression of what can be labelled as ‘myopic self-interest’, expressed in the differential access to vaccines both between and within countries.

An example of ‘myopic self-interest’

Vaccines are primarily designed as public health tools to achieve herd immunity in the population, thereby collectively protecting everyone from the virus by stopping its spread. The rollout of vaccination against COVID-19 is a textbook example of a public goods problem in which actors, each acting in their myopic self-interest, give rise to a global suboptimal allocation equilibrium. This calls for collective action and coordination to maximise the common good—a role that governments have seemingly failed to grasp when thinking of either national or international vaccination strategies. International organisations have been powerless to influence them. The WHO has urged those countries who have amassed large stocks of vaccines to pause the national rollout once their highest priority recipients have been immunised and share their supplies with similarly high-priority people in countries that have not managed to secure stocks of the vaccine. The consequence of what looks like ‘myopic self-interest’ is mapped in Figure 1 below. 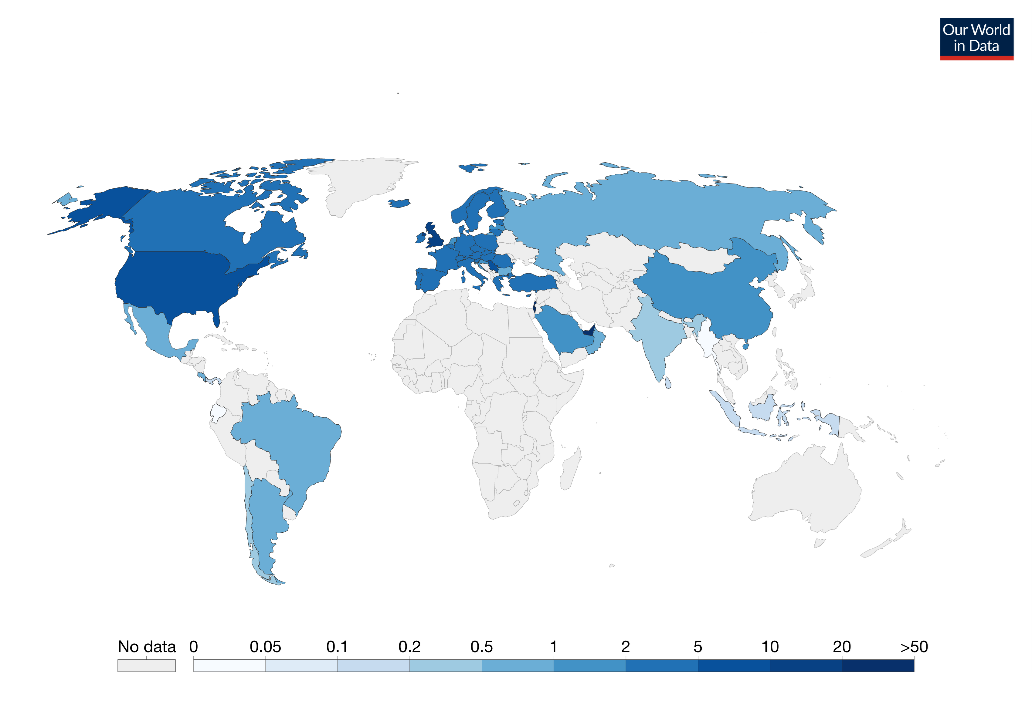 Note: This is counted as a single dose and may not equal the total number of people vaccinated, depending on the specific dose regime (e.g., people receive multiple doses). Source: Official data collated by Our World in Data – last updated 31 January 9:10 (London).

Unsurprisingly, national myopic self-interest has led to faster vaccination rates in those parts of the world that already have more economic and political power, a process that has come to be known as ‘vaccinationalism’, a form of national self-interest. In practice, this means that about 51% of the vaccines are in the hands of 14% of the world’s population. This is because high income countries buy vaccines in excess of their needs and lower income countries are at the mercy of what the COVAX vaccine pillar (the multinational initiative designed to deliver at least some vaccines to lower income countries) can give them access to. These ‘vaccinationalistic’ behaviours have also been exhibited within countries, where immunisation rates have reflected existing racial and socioeconomic hierarchies rather than allocations that would maximise collective social welfare.

Vaccine fast-tracking as a ‘national contest’

Fast-tracking a country, or a group within a country, to vaccination reflects the wider global competition for the health care resources that protect us during a catastrophe. Similar issues have already been observed with personal protective equipment (PPE), ventilators and even toilet paper during the early stages of this pandemic. Many countries like the UK, Australia and Canada have approached the purchase of vaccines as a contest in which winners seize the opportunity to order many more vaccines than required to fully vaccinate their populations, resulting in reduced supply and higher prices for their neighbours, whom they see as losers.

Populations in these “winner” countries may be fully vaccinated before those in neighbouring nations, providing an opportunity for nationalist governments to feel vindicated in their isolationist policies such as the UK after Brexit. These countries will soon realise, however, that for their economies to recover it is not sufficient for their populations to be vaccinated. Their neighbours and trading partners also need to be free of the virus, and delays in their neighbour’s vaccination strategy will delay their recovery and health security.

Vaccine fast-tracking as an expression of ‘wider inequalities’

Besides efficiency arguments, vaccine fast-tracking gives rise to large inequalities in access to immunisation not just between countries, but especially within. In the US, evidence suggests that older individuals without support are not getting the vaccine, as they cannot overcome barriers such as the distance to vaccination centres, or the digital divide that puts older individuals without internet access or skills at risk. Importantly, these barriers affect Blacks and Hispanic elders as well as non-native English speakers.

There is also evidence that individuals have been using their political power and influence to get early access to the vaccine. In Spain there was huge outrage when the minister of health in the region of Murcia not only skipped the queue to get vaccinated himself, but also managed to get his wife vaccinated with him. Similarly, in the US there has been a debate over the fast-tracking of politicians’ access to the vaccine. In Poland, celebrities have joined politicians as the people fast-tracked to access the vaccine.

In the UK there is evidence that those in more affluent neighbourhoods, where the virus spread the least, have subsequently achieved the highest rates of vaccination. A recent study shows substantial racial inequalities in vaccination rates in Britain: only 20.5% of Blacks who are over 80 years old, live outside of care homes and are eligible for the vaccine have already been vaccinated, against 42.5% of all Whites in this group. This suggests that more attention should be paid to the lower vaccination rates for key groups in which the virus has spread the fastest. These include ethnic minorities, people living in areas of higher deprivation, and those with severe mental illness or learning disabilities. These groups seem to be more likely to be vaccine-hesitant.

Differential death rates from COVID-19 both within and between countries are largely due to the differential spread of the virus across some deprived populations, which in turn have not been fast-tracked yet in the vaccine rollout. Prioritising the vaccination of groups in which the virus is spreading the fastest both globally and nationally— typically those living in deprived communities—is likely to be a fairer and more efficient way of tackling the virus as a global public goods problem, rather than leaving countries and individuals to act in their parochial interests.

Miqdad Asaria – LSE Health Policy
Miqdad Asaria is an assistant professorial research fellow at LSE’s Department of Health Policy. He is a health economist with extensive experience in both academic and policymaking settings. His research interests include health inequalities, health financing, healthcare prioritisation and healthcare management with a particular focus on the health systems in India and the UK.

Joan Costa-Font – LSE Health Policy
Joan Costa-Font is an associate professor (reader) at LSE’s Department of Health policy. He is an economist affiliated with CESIfo in Munich and IZA, Bonn. The core of his current research is on health economics.