This week has seen the second impeachment trial of former President Trump unfold. Julie Norman looks at how the trial is being run, and the political implications of a likely acquittal.

How has the trial unfolded?

The trial began on Tuesday 9 February with a 4-hour debate on the constitutionality of the proceedings, followed by up to 16 hours of arguments from the prosecution and defense teams over two days each. The prosecution team consists of nine members of the House of Representatives, called the House managers, led by Rep. Jamie Raskin (D-MD). Former president Donald Trump is not present at the trial, and is represented by a private defense team consisting of attorneys Bruce Castor, David Schoen, and Michael van der Veen. The entire senate serves as the jury in the trial, with Senator Patrick Leahy (D-VT), the president pro tempore, presiding. A two-thirds vote is required to convict, meaning that 67 senators (all 50 Democrats and at least 17 Republicans) would need to vote against Trump for conviction.

What are the charges?

Trump was impeached by the House on a single article of impeachment, incitement of insurrection. While focusing on Trump’s role in the rally that preceded the 6 January Capitol riot, the incitement charge also cites Trump’s erroneous claims of election fraud in the weeks prior to the riot that galvanised supporters, as well as his pressure on state officials to change election results. Democrats have used emotive video packages to show how the riot unfolded on 6 January, including previously unseen footage from inside the Capitol emphasising the severity of the situation. Crucially, Democrats also went beyond the emotions of that day to weave a narrative using Trump’s own words and tweets dating back months to argue that he was directly responsible for summoning supporters and inciting their actions.

What can we expect from the defense team?

Trump’s lawyers have called the trial ‘political theatre’ and have already challenged the constitutionality of impeaching a former president. This question has been debated by legal scholars in recent weeks, but most, including some prominent conservative lawyers, have argued that the Constitution, as well as precedent, do allow the trial to proceed. In addition to the procedural argument, Trump’s defense team is expected to claim that his speech on 6 January and previous statements were within the bounds of the First Amendment and did not meet the US threshold of incitement. However, impeachment, and then conviction, does not require the same threshold as a criminal court, but rather that the official violated their oath of office. 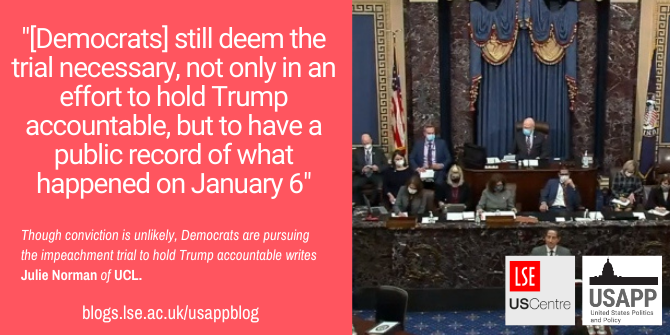 Will Trump be convicted or barred from office?

Trump’s second impeachment trial will almost certainly end in acquittal. Despite the emotional impact of the Capitol footage, it is unlikely that many GOP senators will change their minds about voting to convict Donald Trump. With 44 of the 50 senate Republicans voting against the constitutionality of the trial on Tuesday, it is likely that many will cling to the procedural argument, giving them cover to vote for acquittal without defending Trump’s words or actions.  Others will stick with arguments that appeal to many of their voters, including defending First Amendment rights, or painting the Democrats as engaging in political vengeance against Trump.

Even those who might be tempted to convict are well aware of the potential political costs. Polls this week showed that over 70 percent of Republicans would view those who vote to convict as disloyal rather than principled. Further, several Republican lawmakers who have supported elements of the impeachment process are already facing censure in their home states. A second acquittal will only increase Trump’s standing with his base, enabling him to leverage his political capital against those seen as disloyal, especially the 16 Republican senators facing re-election in the 2022 midterm elections.

What do Democrats hope to get out of the trial?

Democrats are well aware that they probably will not get a conviction, which would be required to bar Trump from holding future office. But they still deem the trial necessary, not only in an effort to hold Trump accountable, but to have a public record of what happened on January 6, prevent a culture of impunity for similar actions by public officials in the future, and allow American citizens to draw their own conclusions about Trump’s culpability. However, even winning over the court of public opinion is an uphill battle. Even though polls show that 56 percent of Americans support conviction, this falls on sharp party lines, with nearly 90 percent of Democrats in favour and over 80 percent of Republicans opposed, which is unlikely to change significantly given the level of polarisation between the parties.

Where has Biden been in all of this?

President Joe Biden has been staying out of the impeachment fray as much as possible, agreeing that the trial ‘has to happen,’ but deferring to Congress to see it through and focusing instead on building support for his $1.9 trillion relief package. Like many in Congress, Biden is likely hoping the trial wraps up by the start of next week, a notably shorter period than last year’s three weeks of impeachment proceedings, so that the spotlight can be on his agenda.

Julie Norman – UCL
Dr Julie Norman (@DrJulieNorman2) is a Lecturer in the Department of Political Science at University College London (UCL), and a researcher at UCL’s Centre on US Politics (@CUSP_ucl).