With the impeachment and exit of Donald Trump from the presidential stage, the Republican Party now faces a dilemma of how to define itself so that it can win back Congress and the White House. In new research Rosalyn Cooperman, Gregory Shufeldt, and Kimberly Conger find that GOP activists fit into two broad groups: Establishment Republicans who are more likely to compromise with other party members and Democrats, and Contemporary Conservatives who place policy goals above party loyalty. They write that heading into the next electoral cycle, these divisions will likely hamper cooperation within the party and chances for Congressional bipartisanship.

Now that Donald Trump has been impeached and acquitted (again), and congressional Democrats hold a slim majority over Republicans in both the House and Senate, the Republican Party finds itself at crossroads in how to define itself moving forward, particularly in the absence of a party standard bearer and high external polarization between them and the Democratic Party. Our research on a key group party activists, party delegates, sheds light how much of an appetite the party has to move on with and without Trump, find opportunities for compromise to get things done in a Congress with slim Democratic majorities, and to recruit candidates who will help them take back the Congress and/or the White House.

Party activists are the bridge between candidates and voters. Every four years delegates from each party come together to formally nominate their party’s candidate for president and create the party’s policy platforms. Parties always have internal divisions, and these divisions can change, deepen, or ease, as new and returning activists get folded into the base. In our research we uncovered two distinct factions within the Republican Party activist base – Establishment Republicans, and the more populist faction that we label “Contemporary Conservatives” – that we also see among Republican officeholders and voters. Our findings about Republican Party activists may help explain how or even whether these factions negotiate and resolve their disputes.

Divisions within the party are not about issues but about goals and attachment to the party itself.

The two main factions of Republican Party activists largely tend to hold similar positions across three issue dimensions – culture, security, and social welfare – and this is helpful in articulating policy stances that have widespread and deep support among members. Republican Members of Congress have largely supported President Trump’s policies and acquiesced to his anti-democratic impulses. But establishment Republicans and Contemporary Conservatives are divided in terms of their attachment to the party and their interest in getting the GOP to support their preferred policies. Contemporary Conservatives are significantly less attached to the Republican Party and significantly more interested in using the party to support their preferred policies and goals. As activists stand now, the idea of the “party faithful” refers to Establishment Republicans, not Contemporary Conservatives who view involvement in the party as a means to achieve their preferred ends. 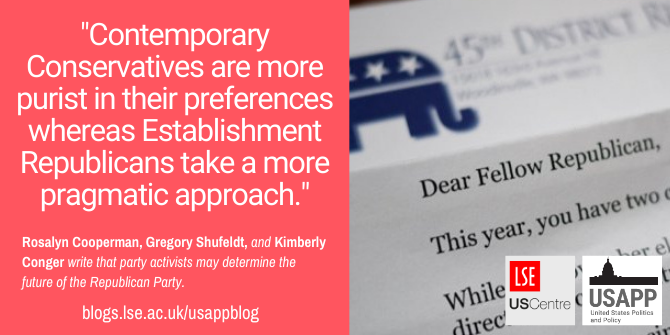 As President Biden – who has repeatedly stressed a desire for bipartisanship – works with slim Democratic majorities in the 117th Congress to advance his legislative agenda, the matter of compromise will again become relevant in the presence or absence of bipartisan support for his first major legislative priority, passage of his $1.9 trillion COVID-19 relief bill. Our research suggests a strong disincentive for Republican Members of Congress to vote to support the bill; the electoral pressure from the farthest right flank of the party against any kind of bipartisan compromise is palpable.

Delegates’ preferences among those candidates who ran for the Republican nomination in 2016 suggest opportunity for Marco Rubio, neutrality for Donald Trump, and caution for Ted Cruz heading into 2024.

Why do we care about the incentives and preferences of party activists when officeholders and voters often receive more visibility and attention?

Political parties will always need to navigate their internal divisions even as they compete with the opposing party. As the bridge between candidates and voters, how internal party divisions are played out among activists can help us anticipate the path forward as a losing party, in this case, as the Republican Party regroups and redefines itself to compete ahead of the next round of elections in 2022 and 2024.