How do voters make decisions when they know almost nothing about a political candidate, including their party affiliation? In new research, Raluca L. Pahontu and Stavros Poupakis argue that when a candidate’s party isn’t known, voters often use an information shortcut – the candidate’s appearance. They find that voters are more likely to select candidates that look more like other elected officials from their preferred political party, and that this effect is stronger for Republicans than for to Democrats.

While political campaigning is ultimately about the attractiveness to voters of a candidate’s ideas and policies, other factors, such as appearance, can influence election results. Those candidates that are judged as being more physically attractive or dominant looking are more likely to benefit in elections. And recent research shows these candidates are more likely to run on right-wing platforms. At the same time, voters often use information shortcuts – called ‘heuristics of representativeness’ – to navigate politics, and discriminate against candidates based on race, gender or appearance. If the faces of liberals and conservatives consistently differ, can voters infer a candidate’s partisanship from their looks in the absence of other information?

In the absence of party labels, we argue voters rely on these information shortcuts, which are often the candidate’s characteristics, to infer her partisanship, and then use this cue to discriminate against candidates. Specifically, we propose that voters discriminate between candidates based on their resemblance to elected legislators. Consistent with candidate selection, we find this effect to be stronger for right-wing candidates. Empirically, we are able to gauge this by relying on a machine learning algorithm for face recognition that allows us to calculate facial resemblance between legislators from the same political party.

This algorithm is similar to those used to unlock our phones. Facial recognition technology relies on comparing the data points of two images, one stored in the phone’s memory, such as from the time we set up face unlocking, and one that is captured each time we unlock the phone through facial recognition. The software then compares these two photos by creating a similarity score, which ranges from 0 to 1. Our phones have a pre-specified cut-off (often set up by the manufacturer), and when the similarity between the two images passes that cut-off, the phone unlocks. This happens irrespective of facial hair, the occasional summer tanning, or posing. 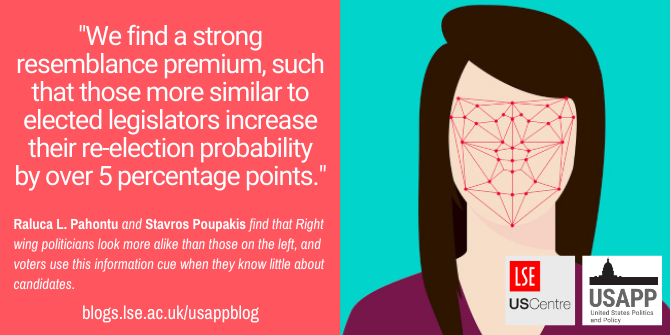 Image by teguhjati pras from Pixabay.

While this technology can be used to unlock phones, its applications go far beyond an owner’s identification. For example, it can be used to predict political orientation. In our study, we use these facial analysis algorithms to study voting behavior in elections in the US and the UK. Both countries have two-party systems that make them ideal settings for our analysis. Using official portraits of legislators, we construct a resemblance matrix between all members of the lower house in their respective countries (Republicans and Democrats in the US; Conservatives and Labour in the UK). Our analysis reveals a stronger within-party similarity among Republicans and Tories (Figure 1). This holds for both men and women. In addition, it holds even when we condition on race.

Figure 1 – Density plots of average similarity within the Democratic and Republican Party, across all US congresses

More importantly, using both observational and experimental data, we find that right-wing voters are able to identify candidates’ partisanship, even more so for right-wing candidates. In the US, we find a strong resemblance premium, such that those more similar to elected legislators increase their re-election probability by over 5 percentage points. While this is true for both parties, Republicans gain the most. In the UK, we administered an experiment where we found that Tory voters were more likely to identify and select the Tory candidate. In both cases, our analysis focuses on white male candidates to rule out selection effects due to greater gender and racial diversity among Democrat and Labour candidates.

In real-life settings, when voter decisions are likely based on multiple information sources, the reliance on looks remains an important predictor of electoral behaviour. Even more, a candidate’s face may have such an impact on how people vote, such that partisanship and policy platform may only have a marginal effect. This has important implications for how and what public services are provided and for minority representation, especially when voting happens when people do not have much information about candidates.

Raluca L. Pahontu – LSE European Institute
Dr. Raluca L. Pahontu (@ralucapahontu) is Fellow in European and International Politics and Policy at the London School of Economics (@LSEEI), an Associate Member at Nuffield College, University of Oxford (@NuffieldCollege) and an Affiliate of the US Centre at the LSE (@LSE_US).