The position of Secretary of Transportation typically has a much lower profile compared to other US Cabinet positions. But it still has power and influence and is now at the centre of President Joe Biden’s Build Back Better agenda. Emanuele Monaco writes that the new Secretary of Transportation, Pete Buttigieg, will use the office to help Joe Biden fix not only America’s crumbling roads and bridges, but US society more broadly, by expanding the definition of ‘infrastructure’ and the scope of the federal government.

Traditionally the role does not attract much spotlight after confirmation. Still, Mayor Pete’s story has a unique appeal to it, reflected in the number of TV shows he has been invited to speak on. Of course, the celebrity of being a presidential candidate played a role, but the barrier-breaking nature of his nomination adds a broader meaning. He is the first openly gay person to be confirmed by the Senate for a Cabinet position. The pride of having his husband, Chasten, near him during the hearings is a central theme of all his early interviews as Secretary. That and the stark difference between his experience and the last time an openly gay nominee walked through the doors of a Senate committee hearing.

Buttigieg was 17 years old when James Hormel, nominated by Bill Clinton as the new ambassador to Luxembourg, was viciously attacked by Republican senators and religious groups because of his sexual orientation and ultimately denied a vote in the Senate, forcing a recess appointment by the President. Buttigieg mentioned this episode during his acceptance speech for his nomination last December and many times afterwards. “I hope that my experience”, he told Jimmy Fallon, “will deliver a different, better, opposite message to some kid who’s watching right now, that you have every right to belong, every right to serve, every right to be part of this country “.

Apart from the historical significance of his appointment, Buttigieg was rewarded with the role of running a complex department and, most importantly, selling the flagship plan of Joe Biden’s Build Back Better agenda. It is certainly not an easy job since Democrats and Republicans talk and think about infrastructure in two wildly diverging ways. That is certainly reflected in the fundamental differences between the recent proposals and previous infrastructure plans.

Biden’s bill, The American Jobs Plan, is more than just a $2 trillion spending proposal, partly funded by an increase in the corporate tax rate. It redefines infrastructure, acknowledging at the same time its role in racial injustice, social disparity, and climate change. Funding for road and bridges, transit and railways, the things everyone immediately links to the word infrastructure, is just one of three big parts of the plan, each worth roughly $600 billion. It also includes the complete refitting of federal buildings, colleges, schools, hospitals, the reconfiguration of the water system and a historic investment in fast internet broadband. 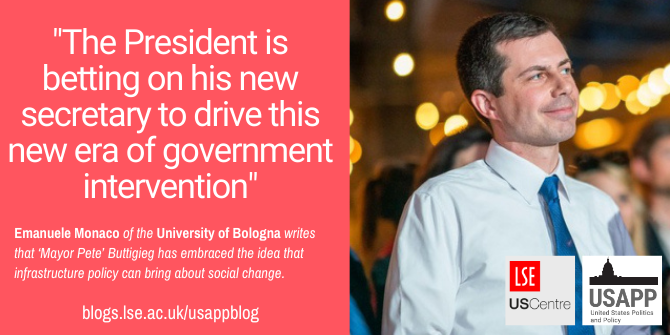 The third part is potentially the more politically divisive because it redefines both the capacity of infrastructures to bring social change and the role of the government in the economy. It entails big investments in the green economy, from power batteries to solar panels to electric cars, marrying the campaign promise of creating new well-paid union jobs to the pledge of tackling climate change. One might counter by saying that there is no time or need to build a green manufacturing industry in the US when it’s easier and cheaper to buy from China. However, being able to compete with the Chinese in green innovation and industry is a crucial element of this plan, as stated in its premise. In so doing, it embraces a form of “industrial policy”, reintroducing the concept in the public discourse after decades of it being a sinful proposition in American politics, thus rolling back a Reaganite consensus that lasted forty years.

Another critical idea infused into the plan is equity. Eliminating racial and gender inequities might not be everyone’s idea of infrastructure policy, but the plan boldly embraces it. With more than $400 billion dollars for the home-care economy and childcare system, it would have a disproportionately positive impact on communities of colour, especially women, whose vote was critical in ensuring Biden’s win last November.

Adding to the more comprehensive $1 trillion American Families Plan the administration is planning to put forward as the second part of its domestic agenda, this would open a new chapter in the history of Social Security. “As FDR created for seniors, Biden would effectively create it for kids”, as Catherine Rampell put it in the Washington Post.

Tackling inequality is also central in the more transport-related parts of the legislative agenda. The President is betting on his new secretary to drive this new era of government intervention. Buttigieg plays well in this strategy for two reasons. His past as mayor, far from making him inexperienced, as he was called at the time of the hearings, positions him perfectly within the people Joe Biden wants to work on his agenda. These are ex-governors and mayors who can appreciate the impact that investment on infrastructure can bring and the power that minutiae and internal regulations have in changing people’s lives. It is not surprising that one of the first decisions Buttigieg took was to roll back the limits on Obama-era federal regulation and their enforcement pushed by President Trump and former Secretary of Transportation, Elaine Chao. The intention is to better address some of the key elements of the administration agenda, like environmental protection and equity criteria in funding programs.

Buttigieg has also embraced the idea that infrastructure policy can bring about social change, which fits his political need to rebuild his relationship with racial minorities, alienated by his message during the campaign. He has discussed the link between racial equality and transportation in every single television interview. He is making it a priority to address the inequities built into the American transportation system, which historically impacted African American communities virtually everywhere. From city-crossing highways that led to the decimation of minority neighbourhoods to bridges built too low for buses to pass through, the American transportation system has been an instrument of racial policy for decades. With African American households three times less likely to own a car than white households, entire parts of the population are cut off from the infrastructure most prioritised and funded by the government. This makes pollution a matter of race relations.

“I think there’s got to be a lot of listening,” Buttigieg told Politico. “Not because I’m new to these issues, but because we need to understand the full scope of how we got here, and because everyone needs to be at the table in dealing with the solutions.”

The big question for Mayor Pete moving forward: will that be enough to transform “Infrastructure week” from a media punchline used by Trump to distract from his scandals to an instrument of lasting change?