Last week, President Joe Biden unveiled a federal budget totaling $6 trillion, which includes significant new spending on infrastructure. If passed in its entirety, the budget would increase federal spending as a portion of the economy to historic heights — reaching sustained levels not seen since World War II. In this Q&A, Thomas Gift examines the implications of this proposed rise in federal spending, the centrality of infrastructure to the budget, and whether the White House and other Democrats can broker a compromise with Republicans.

What do you make of the new $6 trillion budget Joe Biden announced last Friday, which includes calls for significant increases on infrastructure spending?

Biden had outlined many of the budget details before, but the total dollar figure remains staggering. It’s not too strong to say that it represents a paradigm shift in how some leaders in Washington view the role of the federal government in stimulating GDP growth, boosting productivity, and helping the US to compete internationally. If Biden’s package passed without revisions—which it won’t—it would raise federal spending to sustained effective thresholds not seen since the Second World War. It would put the U.S. on pace to spend $8.2 trillion within a decade, with annual deficits ballooning upwards of $1.3 trillion over that period. Of course, the big-ticket item, and where most attention is focused, is infrastructure. The final budget will largely depend on how much Biden can get Republicans to buy into his plan. In recent days, Republicans and Democrats have slowly inched closer together on this issue. Currently, Democrats are pushing a package worth $1.7 trillion, whereas the Republican plan totals $928 billion.

What do you think the odds are right now of an infrastructure bill getting passed?

Democrats and Republicans are still almost $800 billion apart. That number has closed from where the two parties began—when Democrats were at $2.3 trillion, and Republicans were at $568 billion—but it’s still a substantial gap. The two sides might be able to forge a compromise—and it’s true that, if there’s one area where bipartisan consensus exists, it’s over the idea that America’s infrastructure needs upgrading. Still, it won’t get easier from here. Republicans have criticized Biden’s effort to massively increase expenditures by Washington. A big challenge is that talks over infrastructure come against the backdrop of the COVID-19 relief package. The White House expended considerable political capital and frustrated Republicans by passing that bill through budget reconciliation, a process which allows bills to pass with a simple Senate majority, rather than the 60 votes needed to overcome the filibuster. So, if Republicans are to get onboard with infrastructure, they’ll likely expect Democrats to come down even further from $1.7 trillion.

If either Democrats or Republicans got what they wanted on infrastructure, how would their plans differ?

Besides the total dollar figure, there are two key differences between the Republican and Democratic infrastructure plans. One is how the money would be spent. The Republican blueprint is more narrowly focused on initiatives that most citizens would traditionally think of as infrastructure—roads, bridges, tunnels, airports, transit, and so on. A major area where Democrats have received pushback is that their definition of infrastructure is so broad (including social programs like home health care), Republicans argue that it’s almost limitless. The other main difference between the Democratic and Republican plans is how the bill would be financed. Republicans are resisting tax hikes on large businesses, where Biden has recommended raising the corporate tax rate from 21 percent to around 25 to 28 percent. Republicans also want to pay for the infrastructure bill partially by tapping into so-far unspent money from the COVID-19 relief package. Unsurprisingly, Democrats claim that this would hurt the pandemic response and slow the economic recovery. 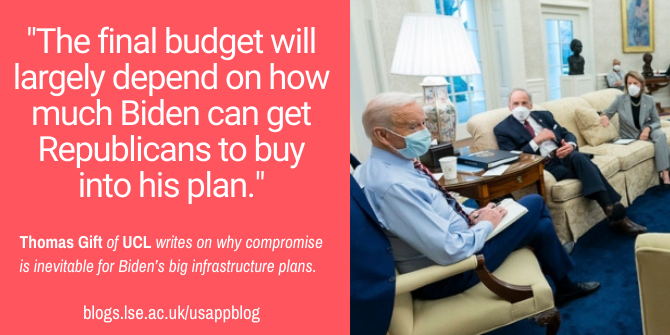 Is there any chance Democrats will pass an infrastructure bill through budget reconciliation, which wouldn’t require Republican support?

Using budget reconciliation to pass an infrastructure bill is possible, but unlikely. Democrats only have 50 seats in the Senate, so they’d need everyone in the party to vote together, with Vice President Kamala Harris casting a tie-breaking vote. The main senator standing in the way is Joe Manchin, a moderate Democrat from West Virginia who’s unlikely to support pushing through an infrastructure bill along purely partisan lines. It’s true that Manchin voted for the COVID-19 relief bill that passed through reconciliation earlier this year. At the time, however, he expressed concerns about the process, seemed dissatisfied that Democrats didn’t make a better effort to obtain Republican support, and publicly affirmed that he wanted to see bipartisan compromise on infrastructure. So, at least right now, reconciliation seems like a non-starter unless Manchin perceives that Republicans aren’t making a good-faith effort to negotiate. He’s already praised the Republican counter-offer on infrastructure as “very, very good,” so that’s unlikely.