In countries such as the UK and the US, Black and Brown people continue to be underserved by education systems and are more likely to leave school early without adequate qualifications for higher education or well-paid employment. This phenomenon is often linked to the White dominated environment in which they live. S. Joel Warrican draws a parallel between the plight of minority groups in these larger countries and in the Caribbean. He suggests that though they are in the majority in the Caribbean, Black and Brown people are still affected by the legacy of the region’s White colonial past, where deeply entrenched education structures are maintained, even in the face of evidence of their harmful effects on today’s students.

There is a crisis in the education systems in the Caribbean, and like elsewhere, certain groups in society are harder hit than others. In places such as the UK and the US, where Whites are the dominant group, Black and Brown children and youth are most likely to be the ones negatively affected by injustices in education systems. In 2017, a UK study reported that Black Caribbean students were performing below the national average. The report also presented a list of 24 factors that contribute to the low achievement of Black Caribbean students there, including (1) Headteachers’ poor leadership on equality issues, (2) Institutional racism, (3) Stereotyping, (4) Teachers’ low expectations, (5) Curriculum relevance and barriers, and (6) Lack of targeted support. The argument is that these students may not be achieving at the low level because of a lack of ability, but rather because of factors linked to inequities in the school system.

The story appears to be somewhat similar in the US. Evidence from a 2015 study suggests that Black students, including those with Caribbean connections, in US schools achieve at a much lower level than their White counterparts, especially in schools with a high density of Black students. This is apparently true even though the perception is that in recent years, achievement among Black students has been rising, but it is still lower than that of White students. One report suggested that in some states, the gap in achievement is not because the White students are performing at a particularly high level (their achievement is generally at the national average), but because Black students’ achievement is particularly low. A suggested explanation for this is that national achievement tests do not take into account cultural and linguistic backgrounds of Black youth in the US.

Assessment in the Commonwealth Caribbean

In the Caribbean, we are also aware of the possible negative fallout from assessment practices. Here, where the population is predominantly Black and Brown, unlike in the UK and the US, the negative impact is not always easily linked to race, but more to social class. Students from a working-class background are more likely to be disadvantaged and to achieve at a much lower level than those from more privileged backgrounds. Consider the following.

In the Commonwealth Caribbean (former British colonies), students in primary/elementary schools usually cap off this stage of education with an exit examination (known by names such as common entrance, 11-plus, and primary exit assessment). The results of these assessments are used for entry to secondary school, with the students with the highest scores being assigned to the most prestigious schools (those with British grammar-school-like histories). Year after year, these assessments come under scrutiny and criticism. Unsatisfactory results in student achievement often lead to calls to abandon this form of assessment, as it is recognised that generally, it is students from working-class homes who perform poorly on these examinations. In addition, these students are also, based on their results, assigned to the less prestigious, under-resourced secondary schools, continuing their trajectory of failure.

The outlook is even more grim among students exiting secondary level education. In the region, these students write Caribbean Secondary Education Certificate (CSEC) examinations administered by the Caribbean Examinations Council (CXC). The CARICOM Human Resource Development 2030 Strategy observes that the CSEC examination “which serves the region’s top academic students well, does not address the needs of the majority of students in the system”. The report went on to state that:

only about 30 percent of the eligible age cohort is permitted to write CSEC examina­tions annually, and of that group, only 25 percent achieve five passes or more including Mathematics and English Language, while 25 percent obtain no passes in subjects. Passes in Mathematics and English Language are compulsory for entry into most tertiary education programmes. However, only very small percentages of students pursue many of the CSEC technical subjects such as Information Technology and the sciences that could lead to better employment opportunities upon graduation (p. 29).

It will come as no surprise to learn that the majority of the students who are not allowed to write these examinations or who perform poorly, are from working-class backgrounds. While many reasons are given for this poor showing (for example, poor cognitive ability, lack of interest in education, laziness, absence of parental guidance and interest), I believe that there is something else that is being overlooked or minimised. To me, what is not being given sufficient attention is the unjust, marginalising and debilitating systems of education that oppress and depress students whose language, culture, and values do not reflect those of the dominant White, male, middle-class ideals of modern education. 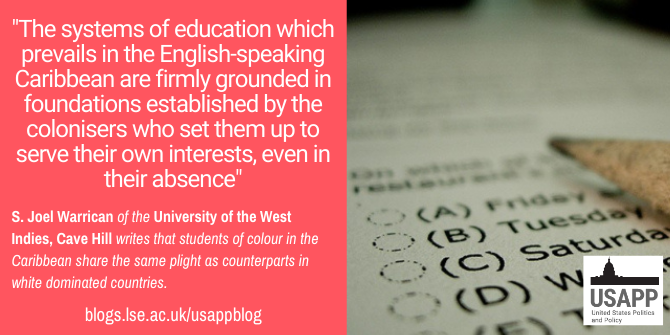 You may be wondering at this point why, in the Caribbean where we have already acknowledged the prevalence of Black and Brown populations, I am making reference to an education system that is White dominated. The answer is in a well-known Commonwealth Caribbean fact: the legacy of colonialism. The systems of education which prevails in the English-speaking Caribbean are firmly grounded in foundations established by the colonisers who set them up to serve their own interests, even in their absence. Linked to these systems is an approach to assessment that maintains a strong bias in favour of students from middle- and upper-class backgrounds; those whose value systems are more closely matched to those of the colonisers. It is noteworthy that this approach to assessment emerged from the work of the renowned (and later, disgraced) British psychologist, Cyril Burt, whose work was used by some to attempt to prove that Black and Brown people are intellectually inferior to Whites.

A Haven for Black and Brown Students?

Despite the growing evidence of the harmful effects of assessment practices that do not take into account the background and needs of the students, education authorities across the region seem extremely reluctant to let them go, and a strong examination culture persists across the Commonwealth Caribbean. The argument that these high-stakes examinations are the fairest way of objectively assessing students continues to be put forward, and the injustice of a system that dehumanises and disempowers large proportions of the region’s youth seems to be overlooked. Indeed, the actions of regional education authorities are similar to those displayed in countries with a dominant White culture, where moral licensing is evident. Moral licensing is a phenomenon where, having done a good deed, persons believe that this can counteract other less noble deeds. This seems apt in the Caribbean context.

Rather than seeking to dismantle education systems that disadvantage so many students in the region, education authorities introduce superficial “good deeds” that they indicate are designed to improve the educational lot of the many marginalised students. They provide enough places in secondary schools; they fiddle with the curriculum to introduce new content; they provide tablets for those who do not have them; they sponsor teachers to access professional development. All good deeds. But they do nothing about the underlying system that forces teachers to teach to the examinations, nor do anything to implement alternative approaches to assessment that do not depend on high stakes one-shot examinations. They seem to surmise that, with all the provisions that they are making, if students do not succeed, it must be because they and their parents are not making good use of the resources. Injustice? What injustice?

So, when we think of injustice for Black students in white-dominated countries such as UK and the US, we may think that Black and Brown students in the Caribbean would fare better in a context in which they are the majority. Unfortunately, there is no haven here for them.

S. Joel Warrican – The University of the West Indies Cave Hill Campus, Barbados
S. Joel Warrican is a Professor of Education (Language, Literacy and Cross-Linguistic Studies). His research focus is on comparative education, multiculturalism and multilingualism, colonialism and education change. His research has appeared in journals such as Journal of Education for Teaching: International Research and Pedagogy, Teachers College Record, Teaching and Teacher Education, Reading Psychology, Journal of Curriculum Studies, and The High School Journal. He has authored several books including The Complete Caribbean Teacher: Literacy.