Debates over the minimum wage in the United States have intensified in recent months, with calls to raise the federal hourly rate to $15 from $7.25, the level it has been set at since 2009. The federal government can only set a one-size-fits-all policy which then applies to workers in low and high wage areas. However, as of May 2021, thirty states, the District of Columbia and forty-five localities have set minimum wage rates above the federal level. Is this hybrid system of minimum wages good for the US, or should minimum wage authority be reserved for local, state, or the federal government alone? In new research, we argue that minimum wages from multiple levels of government improve upon one another: federal minimum wages make local policy setting more effective, and vice versa.

By themselves, federal and local minimum wage laws are not well-suited to handle the economic diversity of the US. On the one hand, if the federal government alone were to set a national policy, it would affect the lowest wage places first. A minimum wage acts like a tax on economic activity and studies have found that, facing higher minimum wages mobile factors of production, like capital and highly educated workers, leave the low wage areas to avoid it. These unintended consequences can further exacerbate the unemployment effects of high minimum wages. Federal policy setting by itself benefits the employed low wage workers in the lowest income areas but can be regressive in this way.

On the other hand, state policy setting allows for 50 different minimum wages that can be tailored to local economic conditions. This institutional design allows higher income places like California to set a $14 policy. However, states have an incentive to set low minimum wages to attract mobile factors of production. Competition between states disincentivizes redistributive programs like minimum wages.

The US hybrid system helps resolve these issues. The federal minimum wage reduces state competition because it decreases the incentive for factors of production to move to low-wage areas. States, now less worried about people leaving, can more effectively set their own preferred policies. In practice, the federal policy and thirty additional state policies combine to form twenty-six distinct minimum wages from $7.25 to $14 that better reflect states’ economic diversity. City-level minimum wages in places like Seattle and Chicago build on this further.

The value of the hybrid system importantly depends on regional differences and the ability of inputs, like labor and capital, to move. If states’ labor markets were identical, a one-size-fits-all federal minimum wage would work. Alternatively, if production inputs could not move around, then states would not compete and would therefore avoid a race to the bottom. In more realistic cases, the hybrid system balances the trade-offs between federal and local minimum wage setting.

Evaluating the US system

This hybrid system has a meaningful effect on minimum wage policies in the US. To see this, we created an economic model of the US states in 2015 that matches current minimum wage policies, the college-wage gap, and college and non-college worker employment in each state. The model, although highly stylized, allows us to predict how wages and minimum wage policies would change under alternative institutional designs. Figure 1 shows how low-wage hourly earnings in each state would change if only the federal government or only state governments could set policy. A point below the dashed 45-degree line indicates that low-wage workers earn more under the current hybrid system than under the alternative systems examined.

In both cases, there is less redistribution from minimum wages under the alternative systems since minimum wages fall. Without state policies enforced in higher income areas, the federal government becomes more concerned about people leaving low-income states. It therefore decreases its minimum wage policy to $6.90 and this is only binding in the lowest income places. Low-wage earnings and employment in higher income areas are not directly affected by the federal policy but are indirectly affected by immigration of mobile factors of production. Similarly, without a national policy, state competition increases. In this case, low-wage earnings decrease in all states. Federal and state policy setting each allow the other level of government to engage in more redistribution by minimizing the effects across states. 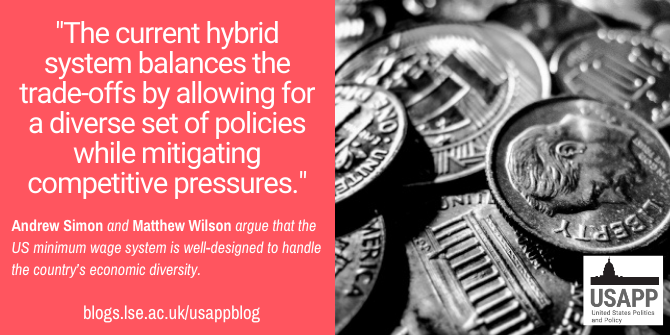 Photo by Shot by Cerqueira on Unsplash

Although the current system still leads some diverse states to have the same enforced policy of $7.25, it is well-suited to handle the US’ economic diversity. Even if the federal government were able to set a different minimum wage in every state, the outcome would not be much different than in the current system. This alternative institutional design could even further balance the trade-offs between different levels of government; the federal government is less concerned about state competition but can now set a higher minimum wage in higher income areas. However, Figure 2 shows that minimum wage laws are nearly identical since the points are all along the 45-degree line 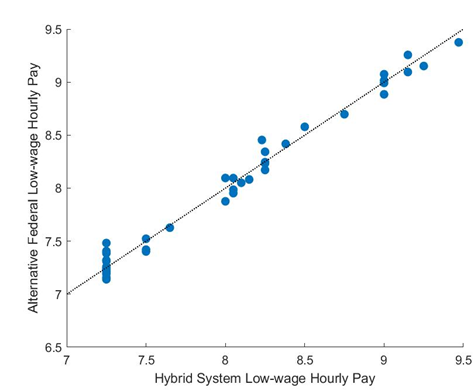 Whether minimum wages should be set at the federal, state, or local level is a significant element of the minimum wage policy debate in the United States. Both federal and state governments have unique constraints and incentives that undermine the minimum wage as an effective redistributive tool. The current hybrid system balances the trade-offs by allowing for a diverse set of policies while mitigating competitive pressures.

Andrew Simon – University of Michigan
Andrew Simon is a graduate student in the Department of Economics at the University of Michigan. His research focuses on issues in public finance, urban economics, and labor economics, with a particular interest in fiscal federalism, or the division of policy setting across levels of government. He has recently published in the Journal of Urban Economics and Journal of Labor Economics.